(Interfaith America) — For their first Ramadan together, Rabita Tareque took her boyfriend, Jesus Gutierrez, to a Bangladeshi restaurant in New York. As the sound of adhaan (the call to prayer) filled the room from a nearby mosque, they dug into a traditional platter of Bengali food — pretzel-like jelapis, lentil fritters called piyazus, and eggplant begunis — for iftar, the evening meal that Muslims share at sunset during Islam’s holy month of fasting and prayer.

Ramadan, always observed during the ninth month of the Islamic lunar calendar, requires that observant Muslims refrain from eating or drinking between sunup and sunset and focus on reflection, prayer, charity and building community.

Ramadan can be an opportunity for Muslims in interfaith relationships to introduce their partners to the core beliefs and teachings of Islam, as well as to the ways different Muslim cultures share what is a deeply communal experience.

Tareque, a Bangladeshi-Muslim immigrant living in Queens, New York, took the opportunity to introduce Gutierrez, a first-generation American and a Catholic born to immigrants from the Dominican Republic, to her faith and culture.

“The Muslim population is so huge and diverse. We each have our own cultural comfort food and traditions to observe Ramadan, and I wanted Jesus to get a glimpse of mine,” says Tareque, an international migration studies graduate student at the City University of New York. Some say the Quran explicitly allows men to marry “People of the Book,” as the Muslim holy book calls Christians and Jews. But the Quran isn’t clear about whether women can do the same.

Scientific studies, meanwhile, suggest that marriages between members of the same religious group may be more durable than intermarriages. Interfaith couples often end up landing in the same religion as their lives also merge. Gutierrez recently converted to Islam in anticipation of the couple’s wedding sometime next year. The two are excited to observe Ramadan together for the first time as Muslims.

For now Tareque has found that her interfaith relationship has strengthened her own connection to Islam. When they started dating, Gutierrez didn’t know too much about Islam but showed a willingness to learn. The two spent hours talking about how their faiths inspire them to be better people and exploring spiritual questions. She explained the purpose of Ramadan and why it’s important to Muslims.

“Through our conversations,” Tareque said, “I feel closer to my faith than I did before. Ramadan offers a beautiful perspective on the spirituality of Islam.” 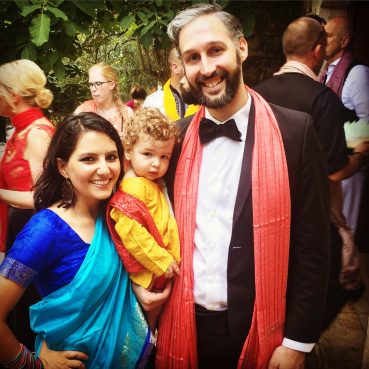 But many couples choose to live their separate faiths in one household. Frankie Fredericks, an evangelical Christian, has been married to Medina del Castillo Fredericks, a Muslim, for nine years. An assistant principal at a New York public school and executive director of World Faith, a nonprofit that combats violence through interfaith understanding, Fredericks said that when you care about a person, you learn to care about the things that are important to them.

Like all relationships, interfaith marriages work best, he said, when the partners are supported to do their own thing. During Ramadan, Fredericks turns his support up a notch. “I’m not a morning person, but sometimes during Ramadan I try to wake up at an ungodly hour and make suhoor (the pre-dawn meal before the fast) for my wife,” he said. “I keep track of when sunset is and have some food and water ready for her to break her fast, and we eat dinner a little later so she can work up her appetite after iftar.”

The respect is mutual, he added. “When she prays, I try not to disturb her, and when I pray at the dinner table, she recites her duas (prayers) in English with me,” said Fredericks. “We are both very deeply rooted in our faiths.”

“It’s been helpful to have someone support you during a month that can be hard when you’re fasting,” said Medina, who added that her husband’s interest has made her more engaged and active in her faith.

RELATED: Kamala Harris can show Americans how we share our faiths

Fredericks said they are open about their own practices with their son, Astor, so he can observe and participate in both, either or neither. “When Astor was 10 months old, I was observing Ramadan, and I remember he crawled into our room while I was praying. I continued my prayers and I noticed that he just sat there in complete silence — at this point, he was usually babbling nonstop! Any time he saw me pray, he would just sit and watch, smiling. Now, when he sees me pray, he will sometimes join me or will tell Frank, “Mama’s praying.”