(RNS) — “To the women who’ve never wanted children, who society and culture have made to feel broken, and small, and less than, and like there must be something wrong with them for not wanting to bear children and for maybe never wanting to do this, even from a young age— this book is definitely written with you in mind,” writes Donna Freitas in the acknowledgments of “The Nine Lives of Rose Napolitano.” “I see you. I hope I have done your experiences justice.”

It’s often assumed that of course women want to be mothers — that this desire is natural, God-given and universal. Just by virtue of being born with female reproductive organs, this thinking goes, all women want to — have to — reproduce.

My friend Donna Freitas pushed back on this. Fiercely intelligent, creative, loving and often hilarious, Donna is a religion scholar and a novelist and a memoirist and a professor. But to some people, she’s somehow less-than because she isn’t also a mom. And that is by choice.

Now she’s written a novel about that, a book I think will resonate with untold numbers of women. It already has, judging from the starred reviews it’s gotten in Kirkus, Publishers Weekly and Booklist. Emma Roberts and Karah Preiss have chosen it for their Belletrist book club, which has a national following of mostly millennial women. 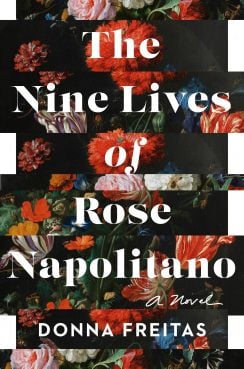 I talked to Freitas over Zoom about “The Nine Lives of Rose Napolitano,” which starts with a single scene — a husband discovers his wife has not been taking her prenatal vitamins — and spins multiple possible narratives from there.

“Rose’s book is based on so many imagined possibilities for my life, that didn’t happen,” Freitas explained. Years ago, her first marriage broke up over this issue of not wanting children, something she and her husband agreed on at the start, but about which he changed his mind. (Both are now remarried and are still friends.)

Freitas says she was uncertain whether anyone would like the book, and whether it would find a home at a publishing house, despite her track record as a writer. It’s just such a taboo topic.

“I think when you are a woman who openly expresses the fact you don’t want children, you get called all kinds of things. Most often, selfish. It can be really isolating and frustrating. You learn it’s something you shouldn’t speak about, because people are going to dislike you.”

So it was a pleasant surprise when her agent immediately connected with the novel, and a shock when it sold overnight in a pre-empt, to the Pamela Dorman imprint at Viking. Then, within the first two weeks it sold at auction in 20 different countries around the world, including deeply Catholic countries like Poland, Brazil and Spain.

“I thought it was interesting that though there are controversial aspects of the book, somehow it resonated,” said Freitas, who is herself Catholic. In one of the more hot-button storylines, Rose chooses to have an abortion. Because of this, Freitas expected more resistance, especially from religious readers.

“Why is it not OK for women to really speak about motherhood as a choice in society, but somehow I got away with it in this book?” she asked. “Maybe it has something to do with the fact my protagonist has nine lives, so she makes lots of choices. The book isn’t a referendum on motherhood. It’s a celebration of both choice and motherhood. I wonder if that fact allows people enter into conversations about this question, in a way they wouldn’t if it were a polemic.”

Religion sometimes compounds women’s suffering if they know they don’t want to be mothers, Freitas says. “In my 30s I learned that questioning whether you want to have children is verboten in the context of religion, especially if you’re Catholic. The church defines women as mothers. That’s really supposed to be your ultimate calling. There is a cult of Mary, a cult of the virgin.” Women who don’t want to have children have no place in the church unless they 1) are nuns who chose a celibate life or 2) “tried to have children and it didn’t happen, and then it’s a tragedy.”

Throughout its multiple, layered storylines, Freitas’ book keeps circling back to a single, consistent touchstone: the relationship Rose has with her own mother, who loves her unconditionally through every choice, every narrative.

This, too, is quasi-autobiographical.

“The novel is based on so many imagined conversations that I didn’t have with my mother,” who died 18 years ago. “I used to talk to her all the time. There are moments when I just have this unbelievable compulsion to dial her up and tell her something. Even when I sold this book, my mother would have been so excited. And of course, she would have also pored over all the scenes between Rose and her mother: ‘Donna, do you really think that about me?'”

Freitas declined to say which of the nine storylines she likes best. “I care about all the versions of Rose, and I think there’s a way in which they’re all true. My greatest hope is this novel is flexible enough to show a real diversity of women’s experiences. Because it isn’t a book that’s saying one way or the other is better, and there’s a way in which by the end of the book, the reader gets to decide for herself who Rose really is.”

It is also, she says, a story about forgiving women their various choices, especially about motherhood.

“Rose makes choices at different points where the reader might be like ‘NOOOO!’ So it’s a novel that’s asking forgiveness for women being imperfect. We tend to be really hard on women. If they are mothers, we judge every single decision they make, and we also judge women who don’t have children. There’s so much judging.”