(RNS) — The above photo is not a video game.

They are firing those missiles at me.

Please, you are saying. You are being your usual Jewish style of paranoid here. Hamas has fired those missiles at Israel. Not at the Jews of the world.

To which I would need to respond: Have you read the Hamas Covenant?

Last weekend, on Al-Aqsa TV, a Hamas political leader called on Arabs in Jerusalem to “cut off the heads of the Jews.”

This is Jew-hatred on a national scale. It is the most violent form of Jew-hatred. It is all you need to know about Hamas.

This is not about Israel. This is ultimately about the Jews.

A colleague in Israel writes:

The situation here is terribly unnerving. The rockets hitting in our area yesterday were close and frightening. We didn’t have time to reach our shelter when the explosions occurred hitting a row of houses. The focus now however has shifted away to the coastal cities and towns which have suffered greatly. Our grandkids are sleeping in their shelter while my daughter was on guard most of the night keeping close. Schools have closed throughout the country and everyone, even those people going to work have been instructed to stay close to a shelter in case of need.

Consider what happened this week in Lod, the ancient city of Lydda, outside of Ben Gurion Airport. Lod is a mixed city — Jews and Arabs. The Arabs rioted. They burned cars. They have burned synagogues. Jews are now hiding in their homes.

But then, you will hasten to say: What about … ? 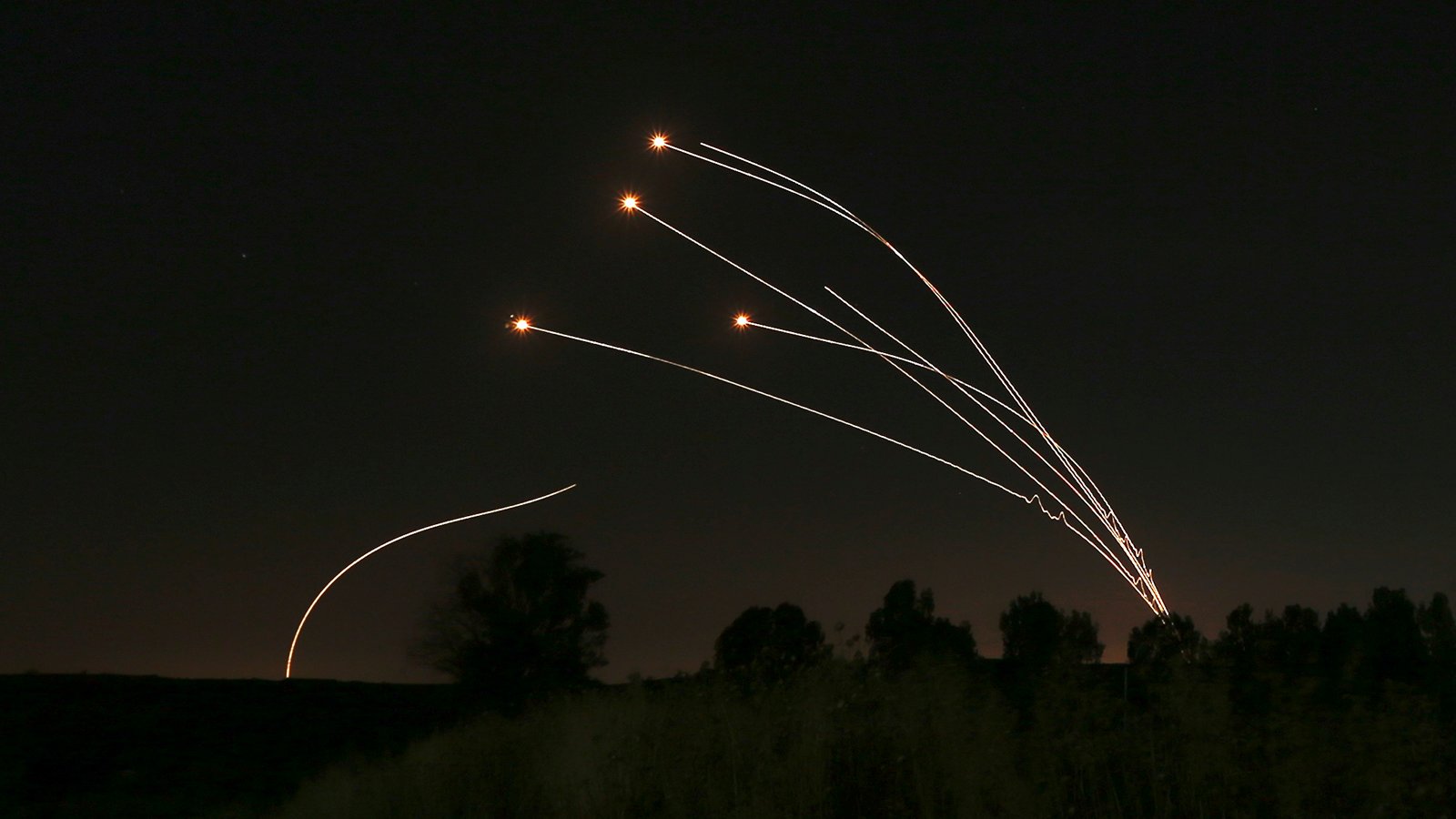 In this May 4, 2019, file photo, Israeli air defense system Iron Dome takes out rockets fired from Gaza near Sderot, Israel. The Israeli Defense Ministry said March 16, 2021, that the Iron Dome air defense system has been upgraded and is now capable for intercepting rocket and missile salvos as well as simultaneous attacks by unmanned aerial vehicles. (AP Photo/Ariel Schalit, File)

What about the current conflict surrounding the eviction of Palestinian families from their homes in Sheikh Jarrah, a neighborhood in east Jerusalem?

There is a legitimate controversy over the property in Sheikh Jarrah. This is no simple conversation. This is not like: “Who owns that condo in Boca Raton?”

In the 1870s, when the land of Israel was under Ottoman control, Palestinian landowners sold that property to Jews.

In the War of Independence in 1948, as Israel went through its birth pangs, Jordan captured the area of Sheikh Jarrah, and it became an Arab neighborhood.

Then, in 1967, Israel captured east Jerusalem. It was still, by and large, an Arab neighborhood, which contained a smaller Jewish neighborhood that centered itself around the alleged tomb of the ancient sage Shimon Ha-Tzadik. For decades, there have been Palestinian residents on that property. They have been at-will tenants. The Israeli Supreme Court has not yet ruled on whether or not the landowners can evict those families.

In Israeli meat restaurants, there is a very popular dish called the Jerusalem mixed platter, a mixture of beef, lamb, chicken and chicken livers.

In Jerusalem, every conversation about real estate is a mixed platter — of history, memory, value, values, costs, personal history and personal pain.

Israel has a right to those properties in Sheikh Jarrah. Historically, those are Jewish properties.

But, being right is not enough. I do not believe that Israel was right in allowing this particular situation to come to the foreground — especially now, and especially considering the sensitivity that should accompany Yom Yerushalayim, the celebration of the reunification of Jerusalem.

There are Palestinians who, to this day, walk around with keys in their pockets. Those keys are to the homes that the fighting of 1948 forced them to abandon in some of the finest neighborhoods in Jerusalem.

But, you will say: What about the behavior of some ultranationalist Jews in the Old City of Jerusalem on Yom Yerushalayim itself?

Israelis have every right to celebrate the reunification of Jerusalem.

How well we remember what it was like between 1948 and 1967: how Jews could not visit the Western Wall; how the Jordanians systematically destroyed the Jewish Quarter, block by block; how the Jordanians used Jewish gravestones from the holiest Jewish cemetery in the world, the Mount of Olives, to build latrines; how Jordanian forces fired on Jewish residents in west Jerusalem.

But: ultra-nationalist Jews marching through the Arab areas of the Old City of Jerusalem, taunting the Arab residents?

Sorry. Jews do not have any right to humiliate the Arabs of east Jerusalem. Judaism believes in treating everyone — even and especially the vanquished — with utter dignity. Yes, even our enemies.

As our grandmothers, and the Jews of the Netflix series “Shtisel” would say: Past nicht. This is not the way.

But, as we tally up the moral calculus, you must know this.

There is a reason. Hamas is an organization of Jew-haters. If there is one thing that we know about Jew-haters, the behavior of Jews has no effect on them whatsoever.

One of the greatest Jewish poets of the last century was Uri Zvi Greenberg.

In a long epic poem, he imagined a young boy in the ancient land of Judea. It was the year 70 of the Common Era. He imagined that the young boy left the land in order to seek his fortune in the Diaspora.

The boy lay down for the night in the desert. In the middle of the night, he woke up in a start. His pillow had burst into flames.

It happened to have been the ninth day of the month of Av. At that precise moment, back in Jerusalem, the second Temple had become engulfed in flame.

At that moment, he remembered who he was.

Likewise, this week, my pillow has burst into flame.

The flames have singed my scalp.

The flames have reached my soul.

Let us pray, each of us, for peace. For shalom. For salaam.