Charles Grodin, one of cinema’s most accomplished comic actors, has died at the age of 86.

For me, the quintessential Charles Grodin performance was his role of Lenny Cantrow, the newly-married bridegroom, in the 1972 original film version of The Heartbreak Kid, with Jeannie Berlin, Cybill Shepherd, and the late Eddie Albert.

The movie is the story of a Jewish couple on their honeymoon in Miami Beach. Lenny (Grodin) is a New Yorker, clearly Jewish, as is his bride, Lila, played by Jeannie Berlin. When Lila suffers an excruciating sunburn, Lenny meets and falls in love with Kelly, a beautiful Midwestern girl, played by Cybill Shepherd.

The Heartbreak Kid was a very “Jewish” film. The creators of the film constituted the better part of a minyan. Elaine May (the mother of Jeannie Berlin) directed the film. Grodin and Berlin starred in the film. Neil Simon wrote the screenplay. Bruce Jay Friedman wrote the short story, “A Change of Plan,” upon which the film was based. Edgar J. Scherick produced the film. Hal David and Burt Bacharach wrote the music.

But, more than that. The Heartbreak Kid (watch it here) is  a meditation on the American Jewish condition — a crucial aspect of the story that the 2007 Farrelly brothers remake ignored, and about which its original creators might not even have been fully aware.

When Lenny first encounters Kelly on the beach in Miami Beach, he is lying on his towel. She approaches him and says: “That’s my spot. You’re lying in my spot. Everybody knows that.” Lenny: “I just got here.” Kelly: “Never mind. Just don’t do it again.” With this, she runs off into the surf.

Commentary: The date is 1972. By then, Miami Beach had become the Garden of Eden for Jewish vacationers (as in, the Eden Roc Hotel). Likewise, for Jewish residents, especially Holocaust survivors.

But, as recently as the 1940s, Miami Beach had not been overtly friendly to Jews. Hotels advertised “strictly Gentile clientele.” Restrictions against Jews in some country clubs persisted until way after 1972.

Yes, the whole scene is deliberately flirtatious. And, perhaps that is all it was — no antisemitism intended.

Even still, the notion that “you’re lying in my spot” sends a subtle, even unintended signal and subtext: “This [this piece of sand/Miami Beach/this country] is my spot [culturally, ethnically, religiously — not yours.] Everybody knows that [it is built into the very premises of our culture].”

Kelly takes Lenny to a rural cabin for a romantic rendezvous. She seduces Lenny into a coy, teasing game. They both get naked, and she tells him that they must stand together as closely as possible without touching.

To which Lenny responds: “I love it! All my life, I wanted to be in a place like this, with a girl like you, playing a game like this!” To which she responds, shyly: “I don’t know if I can go through with it.”

Commentary: This was more than a game. This was about how little game about how it seemed that America had teased the Jews, seducing us with success and security.

America is home — sort of. Because, at the last possible second, she says: “I don’t know if I can go through with it.”

Translation: “I don’t know if I can really let you — the Jew, the minority, the immigrant –  into my space.”

At the end of the film, Lenny has gotten his girl. He is married in a chapel with a cross over his head. His face is streaked with sadness — as if he has begun to discern what his romantic ambition has wrought.

American Jews are not making movies like this anymore. Why not?

How much so? Consider the audience for Shtisel. It is far from being a Jewish-only phenomenon. There are many gentiles who are binging on this story of a hareidi family in Jerusalem, and who are asking respectful, curious questions about that culture.

I do not miss the world of The Heartbreak Kid.

But, I will miss Charles Grodin.

May he rest in peace.

Opinion
Jews need to get woke 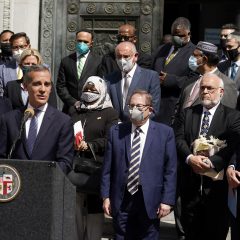