WASHINGTON (RNS) — Lawmakers and leaders of the faith-based Poor People’s Campaign unveiled a sweeping new resolution Thursday (May 20) designed to eradicate poverty in the U.S., with activists touting it as a broad-based legislative framework that hopes to do for poverty what the Green New Deal proposes to do for environmental issues.

Speaking to press at the Capitol, lawmakers said the resolution, titled “Third Reconstruction: Fully Addressing Poverty and Low Wages From the Bottom Up,” was designed to address a wide range of issues, from wages to voting rights to climate change.

Rep. Barbara Lee of California said the omnibus resolution, which will be formally introduced next week, was the result of a years-long process that has culminated in what she called a “profound and moral document, but also a practical, progressive document.”

“We’re calling on Congress and the Biden administration to develop a legislative framework to realize a third reconstruction to fully address poverty and low wages from the bottom up,” said Lee, who chairs the Majority Leader Task Force on Poverty and Opportunity. 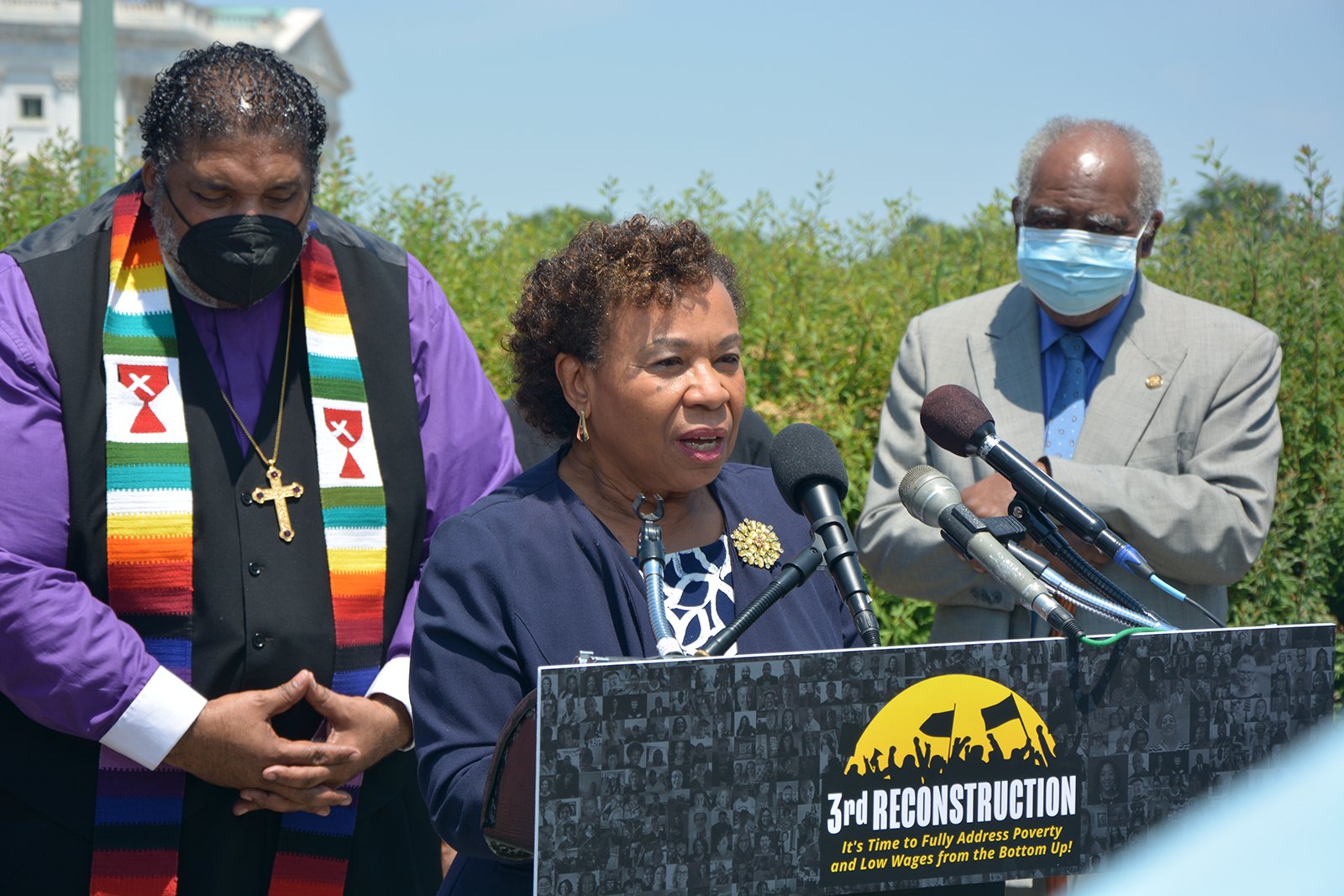 Rep. Barbara Lee of California speaks about a new resolution titled “Third Reconstruction: Fully Addressing Poverty and Low Wages From the Bottom Up,” May 20, 2021, on Capitol Hill in Washington. RNS photo by Jack Jenkins

She was joined by co-sponsor Rep. Pramila Jayapal, D-Wash., who, like Lee, discussed the resolution on the House floor on Wednesday.

She said as liberal lawmakers work to pass legislation in the future, “everything we do has to be centered on how we lift up the poor and eradicate poverty.”

Poor People’s Campaign officials told Religion News Service the resolution is set to include an extensive list of proposals that were discussed at the news conference and closely mirror long-standing goals of the activist group. They include raising the federal minimum wage, creating a federal jobs program, scaling back military spending, instituting a wealth tax, enacting immigration reform, passing legislation that would expand and protect voting rights and “measuring poverty accurately.”

The resolution is evidence of the growing political influence wielded by the Poor People’s Campaign, which has spent several years working to frame poverty as a religious and moral issue. The reference to a “third reconstruction” is an homage to an argument often invoked by campaign co-chair the Rev. William Barber II: that after laws passed during two reconstructions helped uplift Black Americans and others — the first after the Civil War and another catalyzed by the civil rights movement of the mid-20th century — the United States is in need of a third reconstruction to bring about racial equality and economic justice. Barber championed the idea in his 2016 book, and the concept has since been repeated by various scholars and prominent writers such as the Atlantic’s Adam Serwer and Washington Post columnist E.J. Dionne. 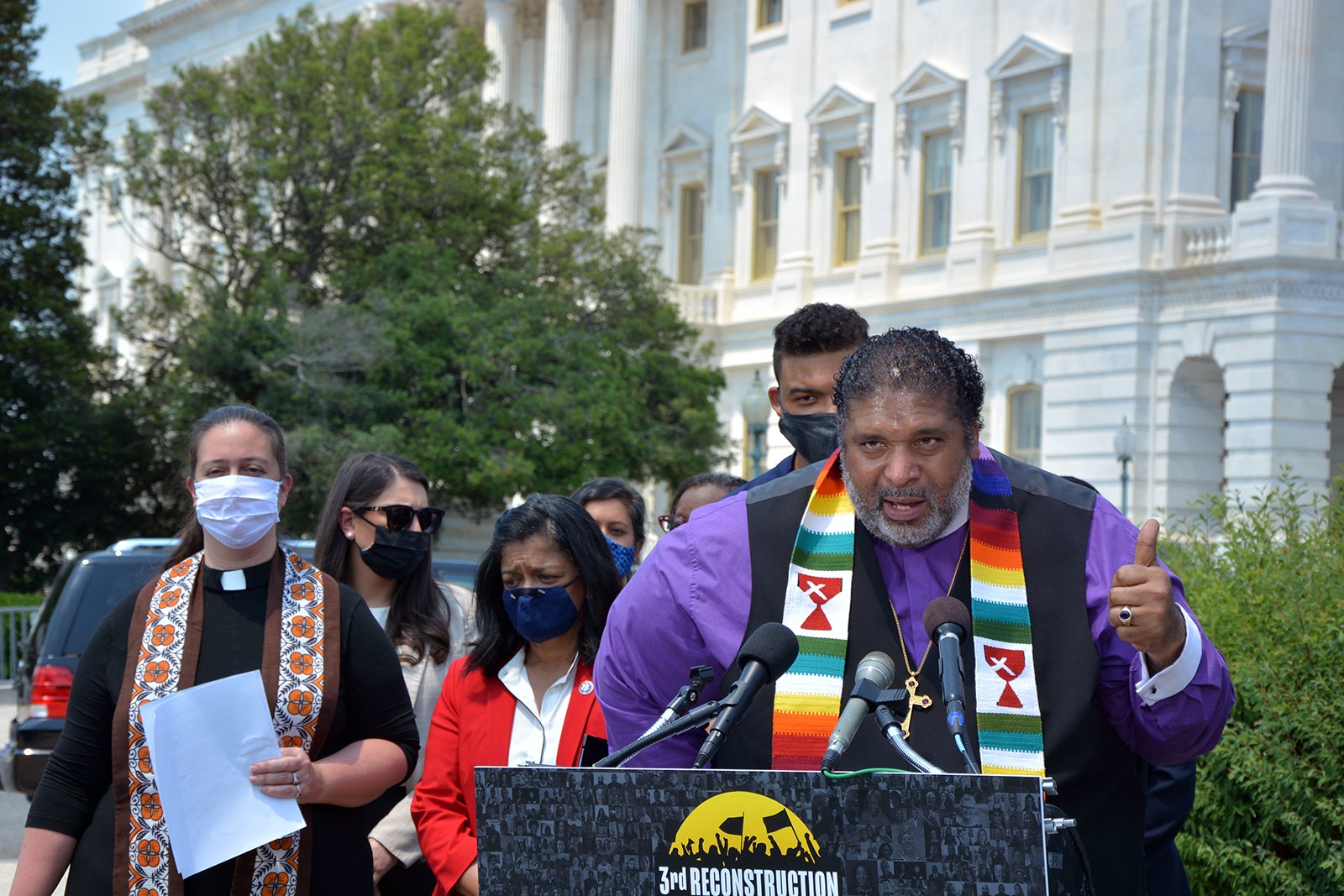 Poor People’s Campaign co-chair the Rev. William Barber II speaks during the announcement of a new resolution titled “Third Reconstruction: Fully Addressing Poverty and Low Wages From the Bottom Up,” May 20, 2021, on Capitol Hill in Washington. RNS photo by Jack Jenkins

“We know what we have to do: We must have a third reconstruction to fully address poverty and low wealth from the bottom up,” he said.

Among the lawmakers spotted in attendance — all of them liberal Democrats — included Rep. Cori Bush of Missouri, Rep. Sara Jacobs of California, Rep. Gwen Moore of Wisconsin, Rep. Jamie Raskin of Maryland, Reps. Danny Davis and Jan Schakowsky of Illinois and Rep. Rashida Tlaib of Michigan.

Some, such as Jacobs, invoked their faith while expressing support for the resolution, arguing that the cause of combating poverty is difficult but just.

“In my faith tradition, we have a saying: Do not be daunted by the enormity of the world’s grief,” said Jacobs, who is Jewish. “Love justly now, walk humbly now. You are not obligated to finish the task, but neither are you free to abandon it.”

Bush, who is a pastor as well as a Congress member, argued that “poverty is a policy choice” before declaring: “With this resolution, we’ve come together as lawmakers and advocates, as people of faith and as people of conscience, because we choose affirming life over inflicting violence.”

Others, such as Tlaib, heaped praise on Barber and Theoharis, thanking them for “bringing your faith forward.” Similarly, Raskin, a co-chair of the Freethought Caucus who oversaw the second impeachment trial of Donald Trump, centering on the Jan. 6 insurrection, applauded the activism of the Poor People’s Campaign by drawing a distinction between its nonviolent protest tactics and the methods of those who attacked the Capitol. 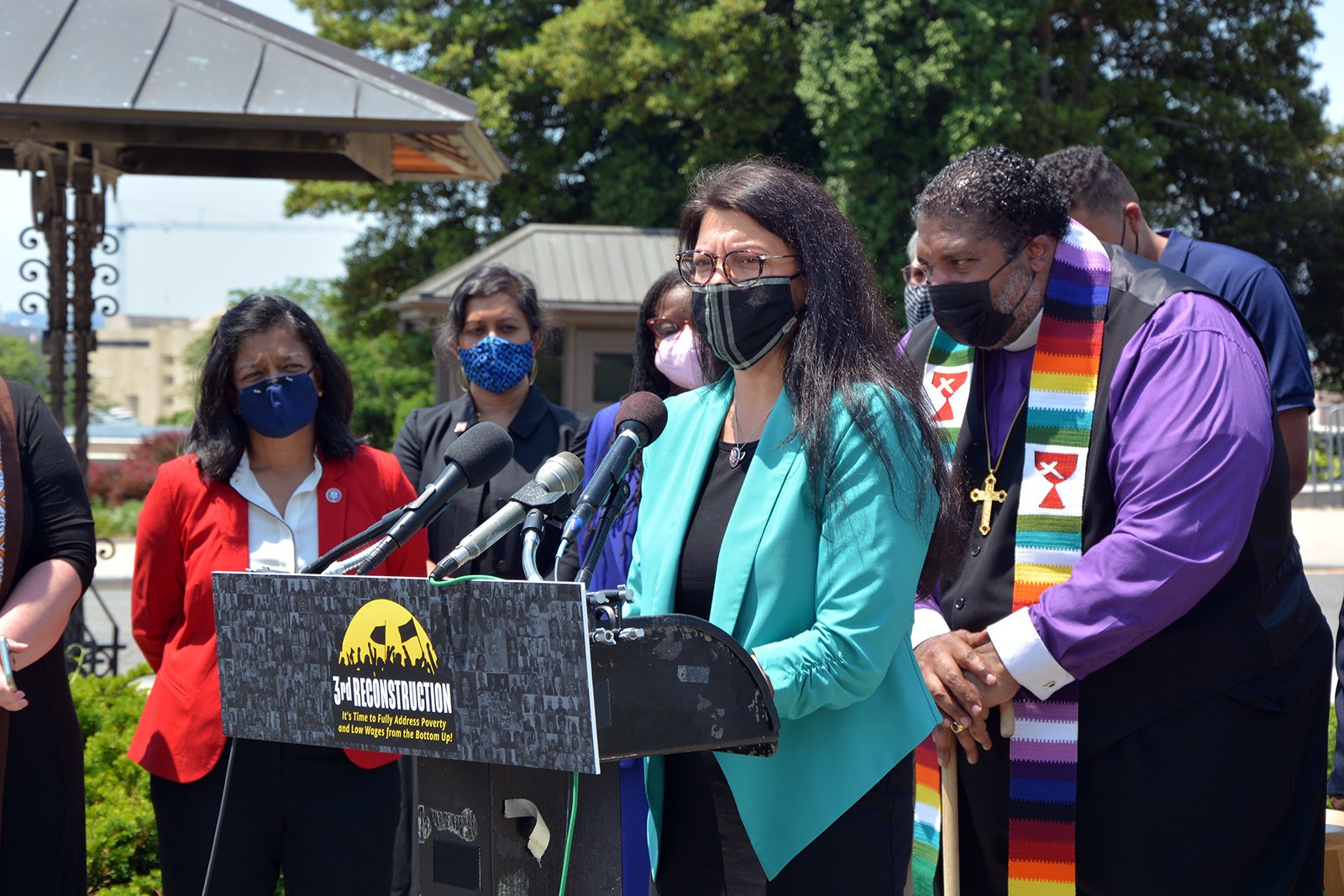 Rep. Rashida Tlaib of Michigan speaks during the unveiling of a resolution May 20, 2021, on Capitol Hill in Washington. RNS photo by Jack Jenkins

“(Eradicating poverty) is going to require the only thing that’s ever worked in this country to really distribute power, which is a mass nonviolent movement,” Raskin said. “I want to contrast that with what we experienced on Jan. 6, which was a violent insurrection. I want to thank these two great leaders — Rev. Theoharis and Rev. Barber — who are showing America how you actually make constructive change. You don’t knock down the windows and beat up the cops and storm the Capitol and overthrow the election. You organize for the election, to defend the voting rights of the people and mobilize a mass turnout to win.”

He added: “Violence doesn’t work, as I hope we proved to our friends on Jan. 6.”

In a separate interview with RNS, Barber expressed excitement about the potential implications of the resolution.

“This is huge,” he said. “We haven’t had an omnibus vision put before the Congress to say, ‘Listen, if you want to talk about poverty … here are the actual steps.’ … You haven’t had this kind of focus with the power of these kinds of congresspersons.”

Barber suggested the proposal’s sweeping nature is reminiscent of the Green New Deal, another legislative framework introduced by liberal Democrats that quickly became a central point of conversation for lawmakers concerned with environmental legislation.

“This week is Pentecost, and every now and then there must be a kind of reconstruction — a Pentecost moment — where all the silos (of activism) come together and understand that we have to push all of it forward at one time,” he said. “That’s the moment we’re in.” Rep. Jamie Raskin speaks about a new resolution May 20, 2021, on Capitol Hill in Washington. RNS photo by Jack Jenkins

Raskin said resolutions such as the one unveiled Thursday are statements of “visionary aspiration” that “set the contours of a direction we want to go in.” Among other things, the resolution provides the intellectual basis for future legislation on a range of topics — although the likelihood of achieving bipartisan support for many of the proposals is unclear.

But Barber, ever the activist, said the mere existence of the resolution can serve as an advocacy tool.

“The resolution lays out the resolve (lawmakers) must have, but the resolution also tells the resolve people have,” he said. “The resolution will be our mobilizing and our organizing guide. … If we ever have to have pray-ins or sit-ins or nonviolent actions or people staying in the Capitol, and they ask ‘Why are they doing it?,’ well, they said in 2021 it was time for a third reconstruction.”