(RNS) — Author and former Buddhist chaplain Chenxing Han amassed nearly 90 interviews through email, Skype and in person, seeking to answer two guiding questions: “Where are all the young adult Asian American Buddhists, and what can we learn from them?”

While pursuing a master’s degree in Buddhist studies, Han decided to focus her thesis on documenting the nuances of Asian American Buddhists, a community that seemed almost nonexistent, she wrote.

“It felt like Asian American Buddhists have got to exist, but where are they and how can we start to connect?” Han told Religion News Service in an interview.

Among those she interviewed for the book were Buddhist Americans with roots in Thailand, Japan, Taiwan, the Philippines, Cambodia, Laos, China and Vietnam. Some identified as Taiwanese-Mexican American, Chinese/Ashkenazi or Belarussian American. Most were in their 20s and 30s. Many lived in California and were second-generation Asian Americans.

Their religious practice spanned a range of Buddhist traditions from Japan, Sri Lanka, Tibet,  Vietnam and other countries. Atheist and Jewish Buddhists were part of the mix.

By centering the viewpoints of young Asian American Buddhists, Han hoped to disrupt what’s referred to as the dominant “Two Buddhisms” narrative, the idea that there are two kinds of Buddhism in the U.S. — the Buddhism of white converts and the Buddhism of Asian immigrants.

“Why is it that the media overwhelmingly reports on white convert Buddhists?” Han wondered to RNS. “The short answer to that is partly white privilege … because whose voices do we tend to hear the most?”

To Han, who is Chinese American, this issue is personal.

Han grew up in an atheist household and began exploring Buddhism in college after traveling across Asia during a gap year. 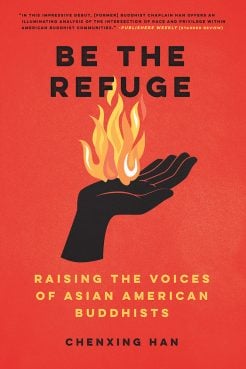 “Be the Refuge: Raising the Voices of Asian American Buddhists” by Chenxing Han. Courtesy image

In her book, she chronicles how despite numerous visits to Chinese, Khmer, Thai and Vietnamese sanghas, she still felt anxious and self-conscious in Buddhist settings “where my Asian face blends in but my halting tongue does not.”

For younger Asian Americans, Han said, the process of reclaiming Buddhism “has to do with how to come to terms with being a minority in this country … racially, ethnically and religiously.”  It’s a different experience from that of their parents, who were raised as a racial and often religious majority in countries such as Sri Lanka and Thailand, she said.

Growing up Buddhist in the U.S. could be shameful for some because their religion can be often dismissed as “superstitious,” Han said.

“Reclaiming is, in part, rewriting these narratives,” she said. “There is so much strength, resilience and beauty in the chants, in the rituals.”

This can mean interpreting Buddhism through English or mixing different forms of Buddhism, Han said. Some young Asian Americans have left their parents’ Buddhism to become a Buddhist of another faith, integrating aspects of what their parents taught them. Others have started interfaith families with a non-Buddhist partner.

In her book, Han also underscores the history, perseverance and activism of Shin Buddhism, a tradition founded in Japan and established in the U.S. in the late 1800s.

This tradition, Han notes, survived the incarceration of Japanese American priests and congregants during World War II. As members of Shin Buddhism and other Japanese sects became more rooted, they were seen as “heathen” and faced hostility in the white and Christian-dominated landscape, Han detailed in her book.

Now, Han is encouraged seeing how generations of Buddhists are honoring their history of struggle by advocating for racial justice and other social issues.

Last year, for example, a group of Buddhists participated in a silent meditation march to stand with the Black Lives Matter movement.

This April, Duncan Ryuken Williams, director of the USC Shinso Ito Center for Japanese Religions and Culture, was among a number of faith leaders who urged the federal government to seek better alternatives than housing unaccompanied migrants in emergency shelters in Southern California.

The Young Buddhist Editorial, a Jodo-Shinshu based publication, emerged in 2020 to provide a platform for stories and voices of Asian Americans within Buddhism. Topics have dealt with anti-Asian hate crimes in the wake of COVID-19, the Jan. 6 insurrection and the effects of meditation on the brain.

I see this group as really rooted in history, having a lot of respect for their culture and constantly adapting it,” Han said. “It’s not that it’s entirely new. They understand their parents and grandparents have already been doing this. They’re kind of doing something similar, but applying it to the issues of their time.

“We’ve always been here all along,” she said.

It’s just that now, Han said, “enough causes and conditions have come together that people are starting to speak out and finding each other.”