LOS ANGELES (RNS) — A month after the Higashi Honganji Buddhist Temple was vandalized and set aflame, a shattered window and toppled lanterns have been fixed. But the temple’s wooden lantern stands and lamps still need to be rebuilt and replaced, and its leaders are contemplating additional security.

As leaders of the temple seek to make their place of worship safer, the Rev. Noriaki Ito said they are being careful not to turn the temple into a fortress.

“It’s a balance of maintaining security, but at the same time being welcoming,” said Ito, head minister of Higashi Honganji Buddhist Temple in Little Tokyo, as its downtown neighborhood is known.

“If we are the only ones here and speak only in Buddhist terms, the temple will be like an exclusive club of people who speak a language only we can understand,” Ito said. “We need to acknowledge and coexist with everyone we live together with.”

On Feb. 25, an invader climbed the temple’s fence and set fire to chōchin lantern stands, knocking over two metal lanterns at the stairs leading to the temple’s front door. The person threw a rock at the temple’s entrance, shattering a glass panel in the building’s foyer. No one was injured.

The vandalism occurred amid a rise of incidents against Asian American and Pacific Islander communities in Los Angeles County and across the country in the wake of the COVID-19 pandemic. More than $90,000 was raised through a GoFundMe page set up for the temple.

Two weeks later, eight people, including six women who were of Asian descent, were killed in a mass shooting in Atlanta.

“We continue to be shocked by all the things that are happening,” Ito said. “We’re just hoping that things will get better.”

Ito said the temple will honor the victims of the Atlanta shooting, one of whom is believed to have been Buddhist, in a ceremony on May 4, the 49th day after the shooting. In many Buddhist traditions, rebirth takes place within 49 days after death.

Ito said it was overwhelming and encouraging to see so much support for the temple after the vandalism made nationwide headlines. The temple received calls and messages from across the country and from Japan. Ito noted that many donations came from people who are not of Asian descent.

“They all consider our temple to be one of the mainstays of the Little Tokyo community, and so when they hear something like that happened, they automatically want to support us,” Ito said.

“That was amazing,” Ito added. “We’re trying to figure out how we’re going to thank all of these people and show our appreciation.”

Higashi Honganji Buddhist Temple has a rich history that traces its roots back to 1904. Ito said a house was converted into a temple back when Little Tokyo was still a tiny downtown community with many Japanese immigrants.

As membership grew, the congregation moved to nearby Boyle Heights, now a working-class Latino neighborhood on the east side of L.A. that was once a thriving Jewish enclave. The temple remained there for about 50 years.

“We moved out to Boyle Heights … which was the area where Japanese Americans could live before the war, and so we were there from 1925 until 1975,” said Ito.

Leaders of the temple grappled over moving to a more central location in Little Tokyo or relocating to the suburbs like Alhambra and Monterey Park as their members moved out of the city.

But during the 1970s redevelopment of downtown L.A., Ito said they were offered the lot where the temple is currently located at a reasonable price. Born in Japan and raised in Boyle Heights, Ito became a full-time minister at the temple after finishing his studies in Japan.

Over the years, Ito has seen a decline in membership, as have other houses of faith across the nation. Through the pandemic, the temple has streamed services and has been able to reach older people who can no longer drive, as well as families who have moved to Northern California or even Japan, Ito said.

Now, as Ito considers the safety of the temple’s members, including its preschool of about 25 students, he said they’re looking into added security guard hours.

Ito said the temple is also looking at partnering with other houses of faith, including a Christian church across the street, to have a car patrol drive around Little Tokyo to check on the spaces of worship in the vicinity.

As Ito has participated in a number of events condemning anti-Asian hate crimes, he said it’s important to condemn those who commit hate crimes, but, he added, “we can’t just say it’s us against them.

“I just hope that people learn that we’re all human beings,” Ito said. 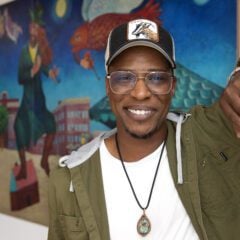