(RNS) — After speaking at Houston’s Second Baptist Church on Mother’s Day, Bible teacher Anne Graham Lotz got an email from one of the congregation’s 83,000 members.

“He said that morning, during the message, he was revived and brought back to the Lord, in confession of sin and repentance and just a recommitment to love and serve the Lord,” recalled Lotz, daughter of evangelist Billy Graham. “And that was a man on Mother’s Day, with a woman in the pulpit.”

The Southern Baptist Convention, which Second Baptist affiliates with, has been roiled lately by the question of when, where and to whom women may preach the gospel. The same weekend that Lotz spoke in Houston, Rick Warren’s Saddleback Church in California ordained three women, disappointing some in the SBC and delighting others.

But Lotz, who once belonged to an SBC congregation but no longer attends an affiliated church, said her focus, as it has been for decades, is not on being a woman in ministry.

“If people get all weirded out by the fact that I’m a woman in the pulpit when men are in the audience,” she said, “I just respect them but I agree to disagree, and I just have to follow the Lord and what he’s called me to do.”

Lotz, 73 and a breast cancer survivor, talked in a recent interview about her belief that ordination is not for her, but that she is nonetheless called to speak in a variety of settings. Those have ranged recently from pulpits to a prayer breakfast at a baseball stadium in Fresno, California.

Questions have resurfaced about women preaching and teaching in recent weeks. How do you react to that development?

I have great respect for Rick Warren. To me, the issue is not whether he’s ordained women, but whether the people he ordained, man or woman, are faithful to God’s word, and are people of integrity and character and point people to Jesus.

You preached at Second Baptist in Houston on Mother’s Day weekend. What was that like?

It was really fabulous. It was very intense, because I spoke Saturday night and then two back-to-back messages on Sunday but at two different venues. So we had to travel about 20, 25 minutes in between the first and second service on Sunday morning. (Second Baptist Senior Pastor) Dr. (Ed) Young has been asking me for three years to come down for Mother’s Day and I haven’t been able to do it. But this time I accepted and (he) could not have been more gracious.

To give you a small example, when he introduced me, he came over to me, took me by the hand, led me up on the platform and then introduced me with me standing by his side. And he did that for all three services. It was an obvious statement that he was making, I felt, for women in ministry. I felt very affirmed and supported.

How would you describe the reactions you’ve received after appearing at Second Baptist on Mother’s Day weekend?

Everything I have received has been very positive. I feel like the people that at least have contacted me have ears to hear what the Spirit was saying. I gave a message for everyone — not just women — women and men and young people and elderly. And it was a message on the Holy Spirit.

Did you hear any negative reaction?

I did not. It could be that my ministry received it and just didn’t pass it along. I’ve just heard very encouraging affirmations.

What’s your position on the ordination of women as pastors, and on women teaching from the pulpit? 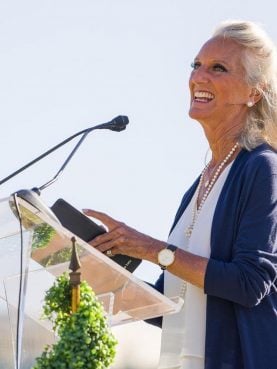 Anne Graham Lotz, daughter of the late Billy Graham, delivers her keynote address at the Fresno-Clovis Prayer Breakfast at Chukchansi Park, May 25, 2021, in Fresno, California. Photo via Facebook

Ordained as a pastor and being a woman in the pulpit are two very different things. Ordination of women, I’ll tell you this: I was at Amsterdam 2000, when they had 10,000 evangelists gathering. During one session, I was sitting in the main auditorium and they broke us up in groups to pray. And I turned around to pray with the people in back of me and it was a whole row of Chinese women who were pastors. And, I thought, “Oh my goodness,” because so many men had been killed, or were imprisoned, persecuted, the women had risen up and taken on this position. And so I’m going to tell you I would never come out against women being ordained. Worldwide, that’s between a woman and God.

I will tell you that I feel specifically God has forbidden me to be ordained. And when I say ordained, I mean that you would have authority in the church to marry, bury, baptize. So I feel like he’s withheld that from me. My call is to be faithful to give out God’s word to the people that he puts in front of me and try to do it without messing it up.

Do you see a connection between (pioneering Southern Baptist missionary) Lottie Moon and your decades of speaking about the Bible or Beth Moore‘s Bible teaching?

I’m not immersed in Baptist history. I just serve the Lord as he’s called me. And I appreciate Beth Moore. She’s gotten many, many women into their Bible. Actually, I’ve only had one conversation with her. I wish I knew her better.

This issue isn’t new for you because earlier in your career you had instances where clergymen turned their chairs around when you spoke.

That’s right. It’s been there the whole time and I’ve been doing this over 40 years.

Certainly at Second Baptist I was, I felt, under the authority of Dr. Young, and I was accountable to him and I was there under his leadership. There are leaders in the church today that would not allow me to be in their pulpit or to speak to their churches and it’s OK with me. God’s given me so many opportunities.

It’s often pointed out that your father called you the “best preacher in the family.” What do you think he would say about the debate about women preaching?

When he made that statement, “60 Minutes” was getting ready to do a profile on me. And I believe he made the statement not because I’m the best preacher in the family but it was his way of giving his blessing to me and what God’s called me to do. Nobody’s a better preacher than Daddy. If you judge the response of people to the messages, nobody, nobody was better than Daddy. But it was his way, in a sense, of just putting his hand on my shoulder and giving blessing to an outlet that would have a broad range.

News
Interfaith leaders join protest outside NRA meeting in Houston
Follow us on Facebook!
Submit your photos to RNS