NASHVILLE, Tenn. (RNS) — As outgoing Southern Baptist Convention President J.D. Greear prepared to open his final annual meeting in that role, he determined to follow through on his plans to change the way he officially got it started.

Traditionally, Southern Baptists open the two-day meeting — which starts Tuesday (June 15) — with the banging of a gavel. In most years, the meetings have featured the Broadus gavel, named for John A. Broadus, a founding faculty member of Southern Baptist Theological Seminary who was also a slaveholder and a believer in white superiority.

This year, Greear told Religion News Service prior to the meeting that he would use a different gavel, named for a pioneering missionary.

“I’ll be using the Judson Gavel,” he told RNS in an emailed response to a question about his plans.

That gavel is named for Adoniram Judson, the first Baptist missionary sent out “by the organization that would eventually become the Southern Baptist Convention,” Greear wrote. “Adoniram Judson has always been a personal hero of the faith to me, and I believe his life and testimony exemplify, in every way, the spirit of a Great Commission Baptist.”

“Great Commission Baptists” is a moniker adopted by some Southern Baptists that simultaneously deemphasizes their regional affiliation and focuses on the command of Jesus to his followers to spread his message worldwide.

In a 2020 statement, Greear had said that he thought “it is time to retire the Broadus gavel.” He added that “it is time for this gavel to go back into the display case at the Executive Committee offices.”

Broadus was the author of books on homiletics, or the art of preaching, including “On the Preparation and Delivery of Sermons.”

But he also was a promoter of the Confederacy in a denomination that has its origins in a defense of slavery.

“At the 1863 meeting of the Southern Baptist Convention in Augusta, Georgia, Broadus drafted resolutions pledging Southern Baptist support for the Confederacy,” reads the SBC flagship seminary’s 2019 report on slavery and racism in its history.

Nine years later, Broadus presented the gavel to the SBC “for the use of the President, which he had brought from Jerusalem for that purpose,” according to a historical note about the gavel included in the denomination’s 1939 Annual. 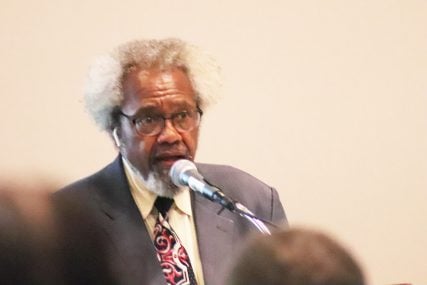 The Rev. Robert E. Wilson Sr., historian of the SBC’s National African American Fellowship, said he appreciated the move by Greear, who will complete his time as president — which was extended due to the COVID-19 pandemic — with the banging of a gavel on Wednesday afternoon.

“I believe that he is trying to show that there is the need for continuing to move from the past that we had to the present that we’re in,” said Wilson, pastor emeritus of God’s Acre Baptist Church at Ben Hill in Atlanta. “And I think that he’s wise in just helping to bring about those changes.”