It was the first time the congregation in this city east of Los Angeles had gathered inside their sanctuary for Sunday Mass, and they were eager and excited to get started — at full capacity and without social-distance restrictions — after more than a year of COVID-19 closures that shut down churches, businesses and schools across the nation last March.

“Each one of you has suffered a lot in these months … but in spite of your struggles, you continue to think of others and continue to put your faith in God,” the Rev. Austin Doran said during the Sunday morning announcements before the 8:30 a.m. Spanish-language service.

The reopening of St. Anthony’s sanctuary was a historic moment, Doran said, for a church that experienced so much death and grief in the peak of the pandemic. During the winter months, the church, where many congregants are Spanish-speaking and working-class Latinos, hosted at least one COVID-19 funeral every week.

California recently lifted most of the state’s coronavirus rules that required social distancing or limits on capacity at restaurants, bars, supermarkets and gyms. In Los Angeles, sports stadiums are operating at full capacity, with masks only recommended for unvaccinated people. Disneyland has bumped up attendance, dropped mask requirements for vaccinated people and discontinued physical distancing, according to The Orange County Register.

Some, such as Diana Ponce, a retired nurse, stepped inside St. Anthony’s for the first time ever on Sunday. Ponce began tuning into St. Anthony’s livestream during the pandemic after looking for churches to virtually attend and soon made it a routine. St. Anthony’s virtual Mass gave her some peace, she said, as she dealt with loss and grief during her workday.

“I just sort of felt that this carried me through,” she said. “I looked forward to it every day.”

Ponce said she became familiar with St. Anthony’s priests through their online services and would often hear references to the church’s murals and images of archangels.

Finally seeing everything in person “felt really good,” she said.

RELATED: After California ruling, some are worshipping indoors, others still think it’s too risky

Bishops across California have issued updated worship guidelines as churches fully reopen, and dispensations from obligation to attend Sunday Mass and services on holy days have been, or are in the process, of being lifted for those in good health. Some Catholic churches have hosted socially distanced indoor Mass — after a U.S. Supreme Court ruling lifted a California ban on indoor church services — while other parishes have opted for outdoor and online Mass.

As part of those new guidelines, masks are not required for fully vaccinated people during indoor and outdoor religious services, but unvaccinated people must wear masks when social distancing is not possible during outdoor services and at all times indoors. Parishes “are not to verify who is and who is not vaccinated.” 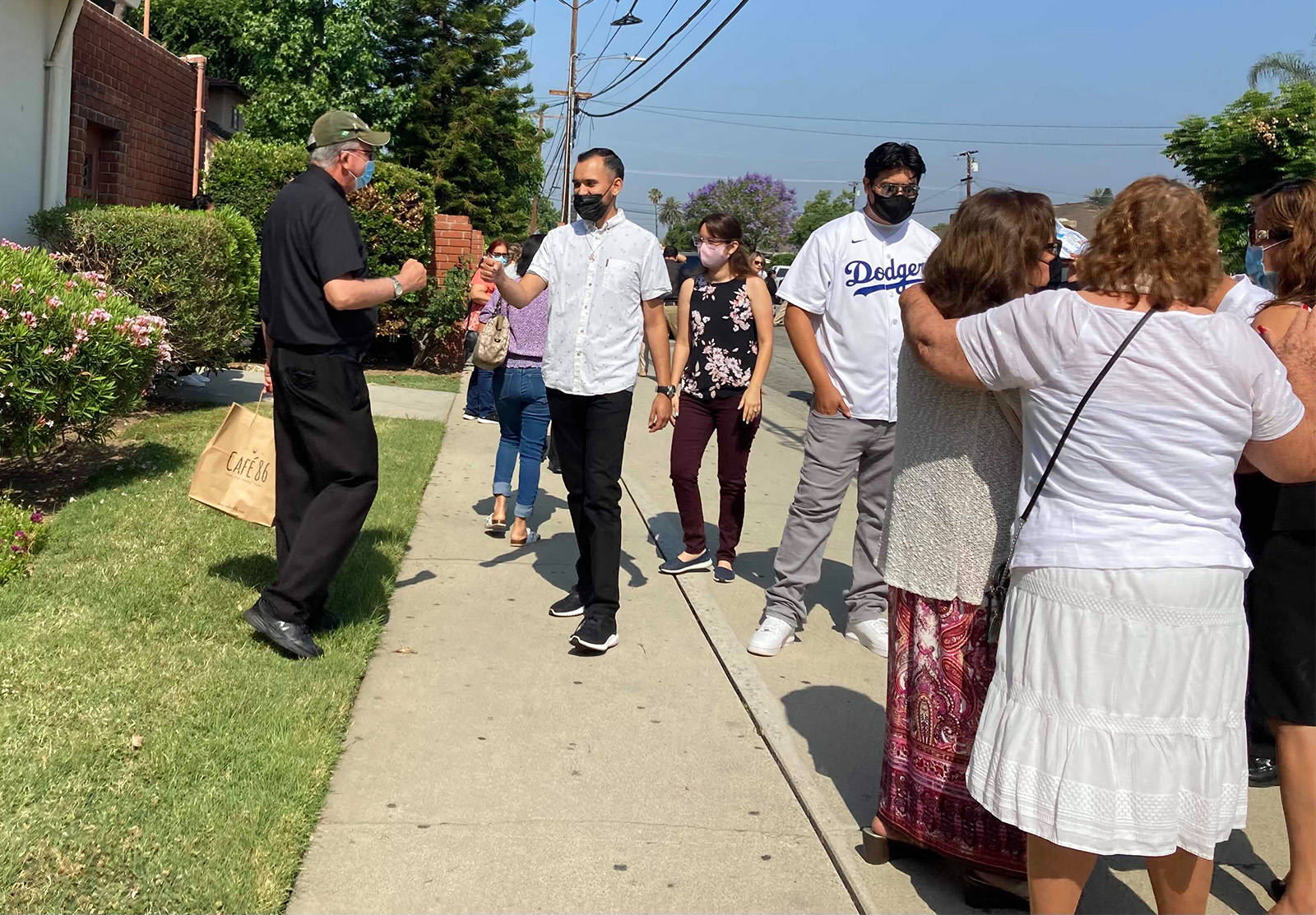 But during Sunday worship at St. Anthony’s, many weren’t fully ready yet to let go of pandemic guidelines.

Congregants were still largely masked, and many sanitized their hands throughout Mass. When taking Communion, most parishioners opted to receive it in their hands, as they have since the pandemic hit, instead of on their tongues. Parishioners waved to each other instead of shaking hands during the sign of peace, and they greeted one another with fist and elbow bumps.

The hesitancy may reflect the caution St. Anthony’s showed during the pandemic. Pastors only met with parishioners outdoors and online until now, even though they were allowed to gather inside with capacity restrictions after the California ruling.

Father Doran was among a group of religious leaders who urged county officials to focus on vaccinating residents in neighborhoods that need it the most, where Latino and Black residents, many who are essential workers, have been hit hard by the virus.

RELATED: Churches in LA’s working-class neighborhoods urge: ‘bring the vaccine to the people’

Pedro L. Garcia, 83, a longtime parishioner of St. Anthony’s, said he felt emotional on Sunday. His daughters, he said, took good care of him during the pandemic, making sure he remained indoors as much as he possibly could.

For someone who loves to be among people, Garcia said being indoors was particularly tough for him. He said he and his family are vaccinated, but he made sure to wear a mask in and outside of church and fist- and elbow-bumped with parishioners and priests.

“I was waiting for this,” Garcia said. 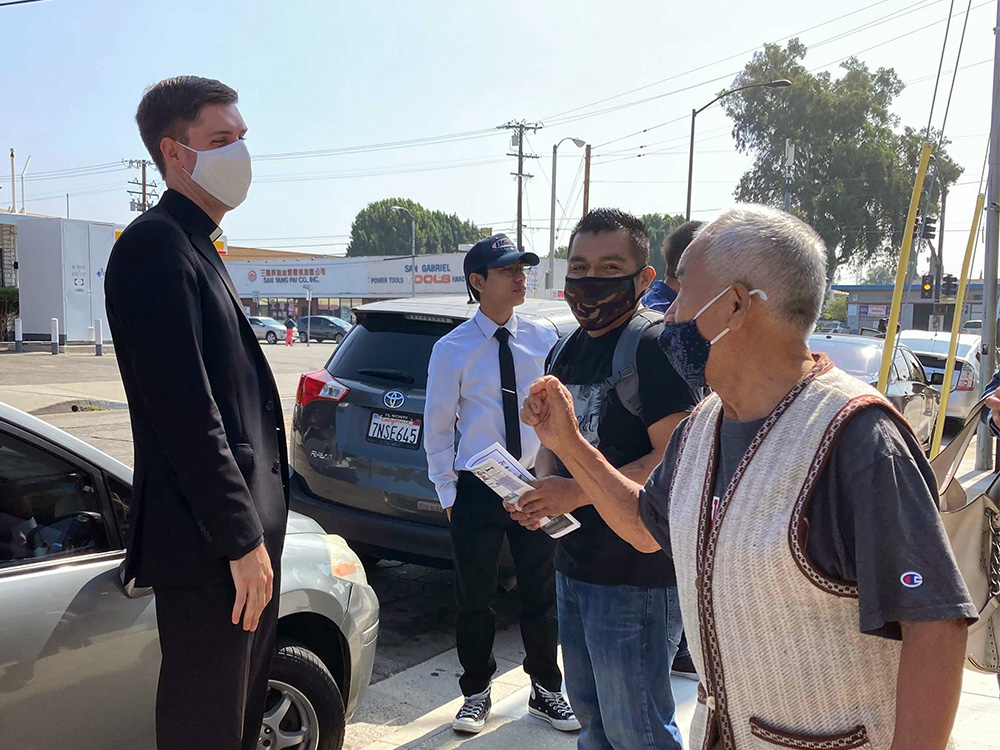 Alejandra Prendergast, of San Luis Obispo, was at St. Anthony’s, which was her childhood parish, to celebrate Father’s Day. Though she can worship at a church closer to where she now lives, during the pandemic Prendergast said she would look in on St. Anthony’s livestreams to help her remain connected.

“Even though I was somewhere else, l could still connect to people, even in my hometown,” she said.

After Mass, Prendergast greeted the Rev. Matt Wheeler, who blessed her child, whose baptism was postponed after her father-in-law died. After losing a year of indoor Mass, Prendergast said she’ll now be adjusting to attending worship services with two young kids, who are almost two years old.

“It was the first time bringing them in, so it was a double-new experience, not only coming in as myself but coming in with my kids,” she said.

For Prendergast, her faith amid the pandemic has been “especially important … because we were very physically lonely.”

Wheeler said he was amazed at the generosity and responsiveness of their parishioners.

“We put out a message of collaboration, ‘We’re all in this together and we’re trying to do what’s best for the safety of all,'” Wheeler said.

“It was a great joy to be able to connect again, to see people face to face in person, inside the church because up until now, we’ve been celebrating Masses in the church, but only with a camera, and it’s just not the same,” he said.