LOS ANGELES (RNS) — It’s been tradition for Annmarie Juarez’s children to receive their sacraments of First Communion at St. Frances X Cabrini Church in San Bernardino County, where dozens of their family members gather for the celebrations.

This year, amid the global COVID-19 pandemic, things were a little different for her fourth and youngest son.

Juarez’s 9-year-old performed his First Communion in early August outside the church. He wore a mask and stood at a distance from the 10 or so others underneath a tarp embellished with white balloons. Only immediate family members were allowed to attend.

“If we were forced to do it outside in front of the church, that didn’t change the meaning of it for us in any way,” Juarez added. 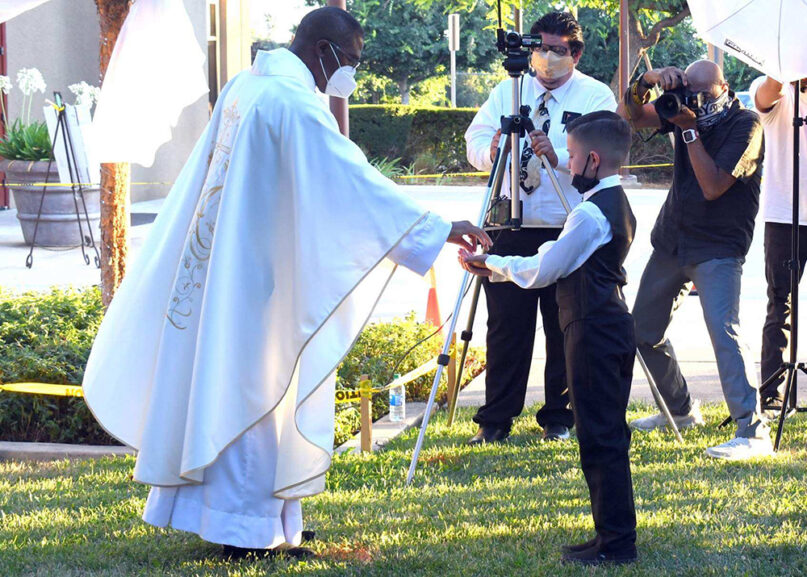 Catholic churches in California have been resuming baptism, First Communion and Mass services outdoors after a series of COVID-19 closures shut down indoor church services in most of the state. California churches were allowed to reopen late May with attendance limitations, but along with businesses and other public indoor spaces, were once again shuttered as COVID-19 cases surged across the state.

Across the United States, parishes’ celebrations of sacraments and rites have been greatly impacted by the coronavirus, according to a survey of bishops conducted by the Center for Applied Research in the Apostolate at Georgetown University.

More than half of dioceses reported their celebrations of the following were “very much” affected: confirmations (81%), First Communions (78%), other sacramental preparation (64%), marriages (59%), baptisms (57%) and funerals (54%).

The survey’s findings, which were released in July, included responses from a total of 116 bishops and represent a 60% response rate. Dioceses responded during different periods of COVID-19 lockdown orders.

The report, “Ministry in the Midst of Pandemic: A Survey of Bishops,” also found, in response to the pandemic, bishops issued directives to address the celebration of sacraments, to suspend public Masses, and for parishes to comply with state and local government orders. 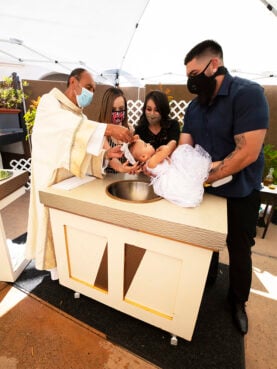 An outdoor baptism at Our Lady Queen of Angels Church, known as “La Placita,” in Los Angeles, in August 2020. Photo by Víctor Aleman/Archdiocese of Los Angeles

For the Rev. Arturo Corral, the early months of the pandemic caused a backlog of about 600 baptisms at Our Lady Queen of Angels. Known as “La Placita” church, the downtown Los Angeles parish is famous for celebrating baptisms, Corral said.

“The people who normally come for baptisms, they’d come with the whole family,” Corral said.

Now, only the parents and godparents are allowed for the outdoor baptism Masses. Corral said the outdoor celebrations have been happening since around late July.

Corral recalled being in the plaza outside the church one particular weekend, when the parish was closed, and seeing a family with their child who was clad in a white baptism suit. Corral was curious and asked why the boy was clothed in the full baptism suit at a time when the church wasn’t open and able to offer the sacraments.

He learned the boy was dressed in his christening suit because the family wasn’t sure the outfit would fit him by the time services resumed. They wanted to make the most of the purchase and spend the day out with family.

To Corral, this was a reminder of how COVID-19 has affected the traditions and economic situation of his parishioners. Corral said the pandemic has emboldened his faith.

“We sustain faith because we see other people believing,” Corral said.

At Christ the King Roman Catholic Church in Los Angeles, the Rev. Juan Ochoa said COVID-19 restrictions have “forced us to reconsider, to let go of superficial things and to focus on what really matters.”

Ochoa described Christ the King as a beautiful church that, with its stained glass windows and Byzantine architecture, would often serve as a picturesque backdrop for parishioners taking photos after First Communion or baptism Mass services.

Now, he said, “Most people have been telling me the most important thing is that my children are receiving the sacraments,” Ochoa said.

Since around mid-July, Christ the King has been hosting outdoor Mass from its parking lot and under a tent decorated with flowers and curtains. Parishioners gather around an altar and sit on folding chairs.

Ochoa said it was difficult not having an answer when parishioners would ask him when they would be able to receive their sacraments.

“The feeling with the unknown is very difficult for us,” Ochoa said.

Ochoa sometimes fears people will become accustomed to “living a life without the sacraments.”

But he also recognizes that before COVID-19, some people were going to Mass just out of habit or because they saw it as a thing to check off on Sundays.

“It’s not so much, ‘I’m going to Mass because of a religious conviction,’” he said. 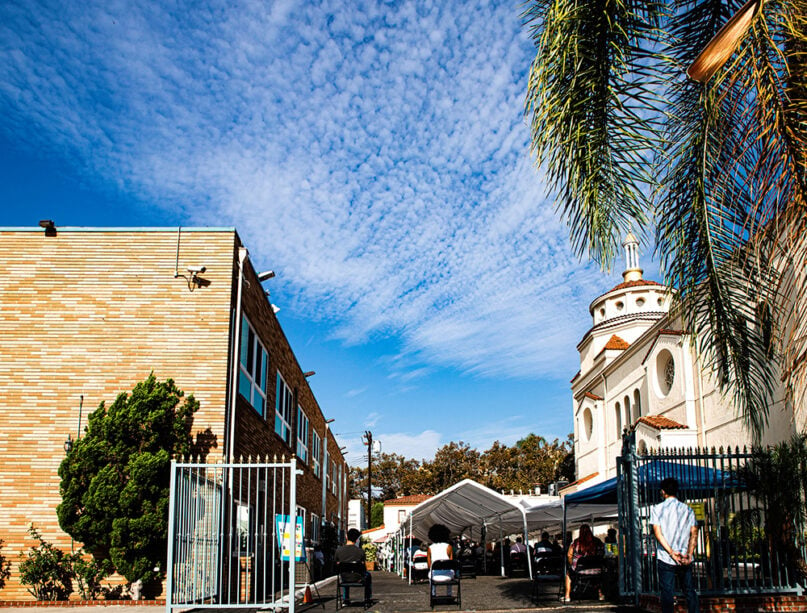 He sees a silver lining.

“This is a great opportunity for the church to go back to the basics,” Ochoa said.

Church, he said, whether inside or outside, is where the faithful can encounter God. “It’s where I’m able to connect with my fellow Catholics.”

For some families, choosing to hold off celebrating their First Communion until next year has been a decision they’ve had to make.

That’s the case for Eric Carpenter and his 8-year-old son, Evan.

Evan was about two months away from taking his First Communion, but that changed when their parish, St. Mel’s Catholic Church in Norco, shut its doors for public Masses in March. He’d been attending weekly Spanish-language catechism classes for nearly two years. The family was attending weekly Mass to bond as a family, but also for their son to get his card stamped each week.

Now, they seek other alternatives for Mass, either online or on TV.

In late May, the church gave students the option to complete the sacrament during a small Mass with about 10 students and their immediate families, or wait until next year. They chose to wait.

“Knowing his grandparents live with us and are in high-risk health category, we all thought it would be the safest option,” Carpenter said.

It turned out the dates he could have signed up for were canceled because of the resurgence of coronavirus cases.

Carpenter said the family has reflected on the meaning of church during this time.

“It has given us a good chance to talk about how ‘church’ is more than the physical location and that we can still be close to God — even without entering the building,” he said.

Carpenter’s daughter had her First Communion two years ago, and now, he said his son is looking forward to completing it next year and maybe having a small party like his sister and her friends.

“In this case, science indicated to us the safest thing was to wait,” Carpenter said.

“We’ll wait until it feels safe again,” Carpenter said. “Hopefully that will be by next spring.”