(RNS) — The U.S. Conference of Catholic Bishops followed its vote last week to commission a document on the Eucharist with a new Q&A, aimed at clarifying the rationale for the document, widely seen as a move toward denying Communion to politicians who back abortion rights.

The Q&A, published on the USCCB website on Wednesday (June 23), suggested that impetus for the document was “declining belief and understanding of the Eucharist among the Catholic faithful.”

The argument contrasts sharply with the bishops’ public debate on the Communion document at last week’s annual spring meeting of U.S. Catholic bishops. While some bishops said they were not playing politics by pushing for the document, other supporters of the measure brought up politicians anyway — and those opposing it said the political implications were unavoidable.

Since Joe Biden was elected the second Catholic president in U.S. history, a group of bishops has sought to counter what they describe as confusion among the faithful introduced by having a Catholic president who supports the right to an abortion, which the church calls a grave sin.

Multiple clerics at the virtual gathering mentioned Biden in particular. The first bishop to speak from the floor last week — Michael Pfeifer, a retired bishop from San Angelo, Texas — said Biden’s abortion policies amount to “infanticide” and made mention of the “issue of our Catholic president receiving Holy Communion.”

The next day, Archbishop Joseph Naumann of Kansas City, echoing several of his colleagues, railed against the idea — which he said Biden supports — that abortion is a right, and insisted “it’s not the bishops that have brought us to this point — it’s really, I think, some of our public officials.” 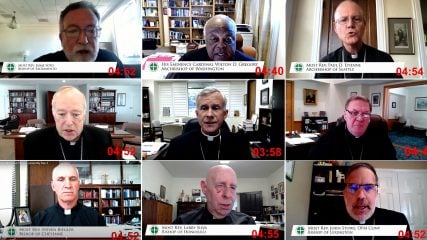 But the USCCB’s Q&A insists that the document would not be narrowly focused on one politician or issue, but would instead be a “teaching document” that could touch on a number of topics.

“The bishops made no decision about barring anyone from receiving Holy Communion,” it reads. “Each Catholic — regardless of whether they hold public office or not — is called to continual conversion, and the U.S. bishops have repeatedly emphasized the obligation of all Catholics to support human life and dignity and other fundamental principles of Catholic moral and social teaching.”

The Communion document, it said, “will include a section on the Church’s teaching on the responsibility of every Catholic, including bishops, to live in accordance with the truth, goodness and beauty of the Eucharist we celebrate.”

The Q&A noted that the Communion document will not be a “national policy on withholding Communion from politicians,” saying “the intent is to present a clear understanding of the Church’s teachings to bring heightened awareness among the faithful of how the Eucharist can transform our lives and bring us closer to our creator and the life he wants for us.”

The Q&A also touched on a letter sent last month to USCCB President Jose Gomez, the archbishop of Los Angeles. The communique, penned by Cardinal Luis Ladaria, the prefect for the Vatican’s Congregation for the Doctrine of the Faith, urged caution regarding the Communion debate.

Among other things, Ladaria warned that a national policy denying Communion to politicians could “become a source of discord rather than unity within the episcopate and the larger church in the United States. Focusing on abortion and euthanasia could mislead Catholics into thinking it’s the part of church moral and social teaching that demands “the fullest level of accountability on the part of Catholics,” Ladaria wrote.

Several bishops who opposed drafting the Communion document alluded to the Vatican letter during last week’s debate, with Bishop Joseph Bambera of Scranton, Pennsylvania, arguing the Holy See had called for forms of dialogue that had not yet taken place. Similarly, Cardinal Joseph Tobin of Newark, New Jersey, said that the Holy See had raised “serious questions about the nature and speed” of the proposal.

But the USCCB Q&A offered a different interpretation: It acknowledged the Vatican “did encourage the bishops to engage in dialogue and broad consultation,” but insisted “last week’s meeting was the first part of that process.”