(The Conversation) — In Northern Ireland every year, a monthslong “marching season” sees members of a Protestant organization called the Orange Order don suits and bowler hats and take to the streets armed with banners and drums.

The parades commemorate the military victory of Dutch Protestant King William of Orange over King James II, the last British Catholic monarch, in 1690. The festivities culminate with parades on July 12 – an occasion usually met with trepidation by authorities fearful of sectarian violence.

These triumphant celebrations of Protestant identity are seen as provocative by Northern Ireland’s Catholic community. The marching season highlights a political divide in the territory, which sees Protestants largely identify as unionists – loyal to the United Kingdom – and most Catholics identify as nationalists, seeking to be part of a united Ireland.

There has been much speculation of renewed violence around this year’s commemorations. Commentators note that Brexit has intensified tensions in Northern Ireland, as a result of the creation of a de facto maritime trade border in the Irish Sea. While this avoids the return of a “hard border” on the island of Ireland itself, Unionists see the arrangement as representing a dividing line between them and the rest of the U.K.

As a scholar who works at the intersection of religion and politics, I share the concerns of those who see the potential for impending violence. The fear is occasions like the July 12 marches provide an opportunity for these frustrations to boil over into unrest, especially given recent political developments.

The circumstances of this year’s marching season align with what scholars call the “frustration-aggression hypothesis.” Originally articulated by social psychologists at Yale University in the late 1930s, it holds that the likelihood of frustration producing political violence increases with the availability of an obvious outlet – in this case, the marches on July 12 – and the perceived lack of nonviolent ways to make frustrations felt.

Throughout the civil conflict in Northern Ireland, the marching season became a catalyst for sectarian street violence. This was especially the case where Orange Order parade routes passed through predominantly Catholic areas.

The parades have been relatively peaceful since the 1998 Good Friday Agreement – the deal struck by political leaders in Northern Ireland, Ireland and the U.K. that established a power-sharing arrangement and substantially ended political violence across the territory. Nevertheless, the history of the parades makes them a prime opportunity for expressions of simmering unionist frustrations.

This year’s marching season also comes in the context of a series of recent developments that have undermined unionists’ confidence in their political representation. Indeed, this past April saw outbreaks of rioting across Northern Ireland. 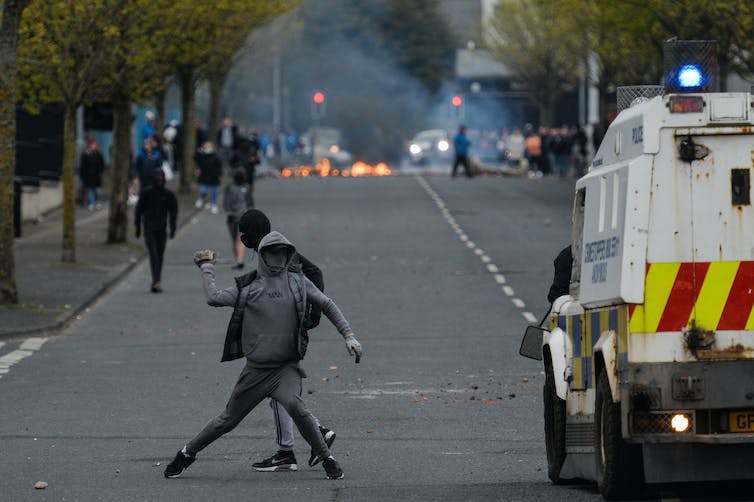 Unionist frustration spilled over into violence in April 2021.
Artur Widak/NurPhoto via Getty Images

The largest unionist party in Northern Ireland is the Democratic Unionist Party, or DUP, founded in 1971 by evangelical preacher Rev. Ian Paisley. While Orangism has historically been more closely linked with the more moderate Ulster Unionist Party – the UUP – Orange Order leaders have attempted, unsuccessfully, to unify the unionist parties into a single political bloc.

Meanwhile, the DUP has lost considerable political influence in recent years. In 2017, it found itself holding the balance of power in the House of Commons and propping up Prime Minister Theresa May’s minority government. But when May’s successor, Boris Johnson, won an 80-seat majority in the election of 2019, the DUP suddenly lost bargaining power. In short, the U.K. government no longer required DUP votes to push through policy.

To unionist dismay, Johnson’s government agreed in January 2020 to a “Northern Ireland only” solution to its Brexit customs issue, ushering in a trade border in the Irish Sea between mainland Britain and Northern Ireland. This outcome played into long-standing unionist insecurities about being “sold out” by Westminster.

The DUP has also been diminished by the party’s own missteps. In May 2021, DUP leader Arlene Foster resigned after party colleagues mobilized to oust her. Her successor, Edwin Poots, inherited a politically vulnerable party. To make matters worse, Poots’ deal to restore power sharing to Northern Ireland was deeply unpopular among his party colleagues. He was forced to step down after only 21 days on the job.

This ongoing instability in unionist politics is reflected in plummeting support for the DUP as frustrated unionists desert the party. Many have turned to the liberal and nonsectarian Alliance Party.

But there is concern that some disillusioned Protestants may be pushed toward parties that oppose power sharing, such as the Traditional Unionist Voice, which was formed in 2007 by ex-DUP members who felt that the party has been too willing to compromise.

Social scientists contend that support for right-wing groups is driven by a sense of lost social and political supremacy, or “nostalgic deprivation.”

This appears to play into what is happening on the ground in Northern Ireland. Demographic changes are contributing to this feeling of nostalgic deprivation. After decades in which Protestants have been the majority group, the 2021 census of Northern Ireland is widely expected to show virtual parity between Protestant and Roman Catholic populations.

While the increasing Catholic population, relative to Protestant, does not translate into majority support for a United Ireland, the shift exacerbates unionists’ sense of lost supremacy. With the DUP failing to deliver political results, there is a danger that “nostalgic deprivation” will find expression through other means, such as in outbursts of street violence during the marching season. Police in the region are preparing for such an eventuality by canceling leave for officers over the July 12 weekend and putting in place a “contingency plan” in case street unrest occurs, the Belfast Telegraph reported.

The danger in Northern Ireland is that the gap between expected and actual political outcomes can generate frustration and raise the likelihood of political violence. In the heady days of the 2016 referendum, unionist support for Brexit was based on the expectation that it would solidify the union between Great Britain and Northern Ireland.

However, its effect has been the opposite. It has established a customs and trade border between the two islands, weakening the link with mainland Britain and undermining the central goal of unionist politics.

Indeed, surveys indicate that a plurality of unionists now believe a united Ireland to be more likely as a consequence of Brexit. This only exacerbates unionist frustration, increasing the chances of street violence during the “marching season.” As one young unionist put it in an interview for the Financial Times, “you have to be violent to be heard.”

(Ger FitzGerald, Adjunct Professor of Political Science, George Mason University. The views expressed in this commentary do not necessarily reflect those of Religion News Service.) 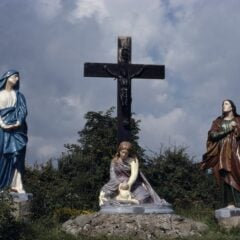