(RNS) — The latest triumph in bashing Orthodox Jewish observance is here, in the form of the hyper-hyped Netflix reality miniseries “My Unorthodox Life.”

The show, which debuted this week, presents a once-observant Orthodox Jewish woman, Julia Haart, who bravely stood up for her disbeliefs, left her life in an “ultra-Orthodox” (ugh: Please call us haredim) community in upstate New York to become a happy and successful CEO of a modeling agency. We see Haart gently and wisely guiding her children in their own life pursuits while dressing like one of her runway-striding charges.

Fashion triumphs over fundamentalism. What could be more inspiring?

Well, actually, plenty. Take, for instance, the joyful religious Jewish lives being lived, and cherished, by hundreds of thousands of us who deeply value what the protagonist of “My Unorthodox Life” dismisses as Jewish “fundamentalism.”

Confession time: We dress modestly, carefully observe Jewish religious law and are unimpressed by what passes as popular culture these days. If that makes us “fundamentalist,” so be it. We cherish Jewish fundamentals. Sue us — or, more lucratively, create condescending and demeaning portrayals of our devotion.

Oh, yeah, that’s been done. And done and done.

Netflix’s new offering follows in the long, noisome wake of a slew of “I survived Orthodoxy” books and films written by or featuring intrepid ex-Orthodox rebels who have ostensibly discovered truths to which their elders are, and forebears were, lamentably oblivious.

It’s the rebels, though, who are oblivious, or, perhaps, willfully misleading. In the trailer for her show, Haart replies to her male assistant’s question about whether Orthodox Judaism has “rules about sex” by responding derisively, “My dear, there are rules about which shoes you’re supposed to tie first.”

It’s true, but the show doesn’t provide an explanation — and one hardly expected one — about how, in Jewish mysticism, “right” is associated with compassion and “left” with strict judgment. Putting on the right shoe first reminds the wearer that compassion deserves primacy in life.

That wouldn’t raise eyebrows or invite sneering. It would only educate, which “My Unorthodox Life” has no interest in doing.

The sheer number of memoirs by young Jews who have chosen to leave Orthodox communities may imply that such communities, particularly Hasidic ones (the paths from which most of the strayers strayed), must be experiencing severe demographic hemorrhaging.

In fact, the influx into Orthodoxy is considerably more prevalent than flight from it. Fully 15% of Orthodox Jews today, according to the most recent Pew Research Center report, were brought up in other Jewish movements, or without any Jewish affiliation at all.

Most of us haredim know many Jews who became Orthodox as adults; they are vital and vibrant parts of our communities, our synagogues and our lives. Some have been observant Orthodox Jews for many years, and newcomers are a constant part of the landscape.

Where are the essays, books and miniseries about some of the many who came from other Jewish places to Orthodoxy? Why no vivid descriptions of what impelled them toward traditional Jewish observance? Why no accounts of the emptiness they experienced in their secular lives, and how those voids were filled by adopting the Judaism of all Jews’ forebears?

RELATED: US Jews rally for more support in combating antisemitism

I suspect that the dearth of exposés and lamentations by such returners to Jewish observance stems from three things. First, and most obvious, accounts of wondrous, fulfilling and happy observant Jewish lives wouldn’t sell. Who wants to read about happy people? The big bucks lie in jaundiced “exposés” of haredi life.

Then there’s the fact that Judaism is rather more keen on forgiveness than on settling scores.

And finally, “returners” simply feel no need to look back in anger or pain; they are too content living the Jewish lives they’ve chosen.

But know, and know well: Those lives do exist, not on screens, perhaps, but in countless vibrant and happy Jewish homes. 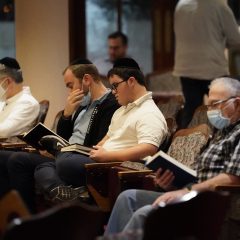