(RNS) — A new survey of U.S. Jews shows they are holding their own, numerically, but the group’s youngest adults are increasingly dividing in polar-opposite directions: secularism and Orthodoxy.

The study from Pew Research is a follow-up to its landmark 2013 portrait, and many of the trends outlined have remained constant. U.S. Jews are keeping pace with the U.S. population, rising to 7.5 million adults and children from 6.8 million in 2013. They represent 2.4% of the U.S. population, a slight but not statistically significant rise from 2.2% in 2013.

Nearly three-quarters of Jews identify as Jews by religion (73%), but a growing number do not consider themselves religiously Jewish (27%), instead identifying as Jewish ethnically, culturally or by ancestry. 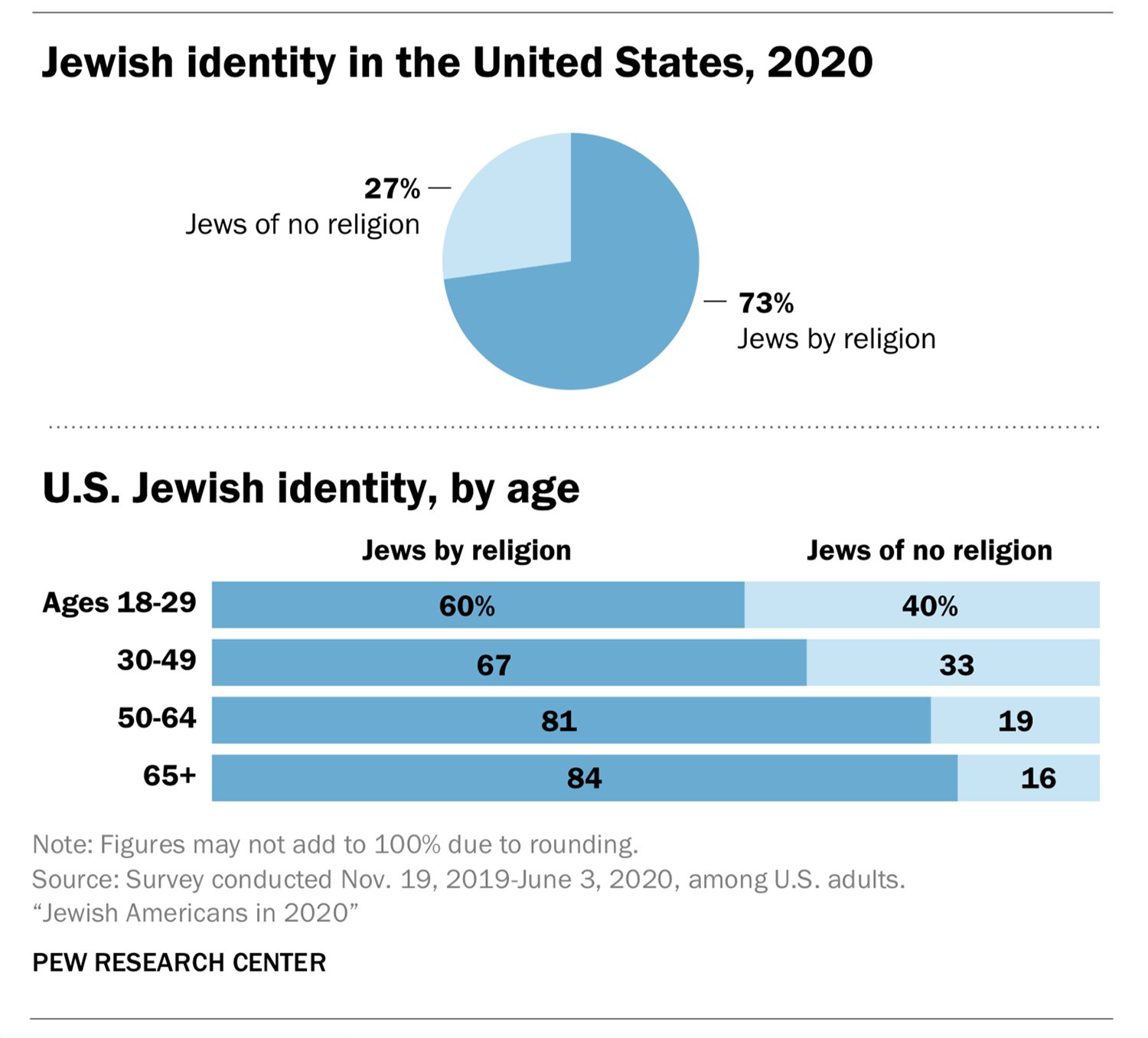 Likewise, while Orthodox Jews represent 9% of the overall American Jewish population, the survey found, they represent 17% among the 18 to 29 age group.

By contrast, the number of Jews identifying as Reform and Conservative — the two largest branches of Jewish denominational life — has remained flat. Only half of U.S. Jews identify with the Reform (37%) or Conservative (17%) movements — roughly the same as in 2013.

“Religion is not central to the lives of most U.S. Jews,” the 248-page report concluded. “Even Jews by religion are much less likely than Christian adults to consider religion to be very important in their lives (28% vs. 57%).”

For most Jews, that’s not news. Secularism has a long history in U.S. Jewish life. Jews tilt strongly liberal. They have higher levels of education, earn higher incomes and are more geographically concentrated in urban cores, especially in the Northeast — all markers that tend to correlate with less religiosity.

As Arielle Levites, managing director of the Collaborative for Applied Studies in Jewish Education at George Washington University, said on a media call about the study, the growing secularism among U.S. Jews is not a sign of failure.

“It’s a long-lasting mark of Jewish distinctiveness to not care much about religion,” she said. “You could also think of it as durable and resilient.” Asked about the causes and activities “essential” to Jewish life, 76% said remembering the Holocaust was important, followed by leading a moral and ethical life (72%), working for justice and equality in society (59%) and being intellectually curious (56%).

Observing Jewish law and its many commandments, what is called “halakhah,” is essential to Orthodox Jews but to only 15% of all Jews.

The Pew survey — the largest of its kind — was conducted from among 4,718 Jews across the country between November 2019 and June 2020. The survey was conducted online, unlike the 2013 phone survey. 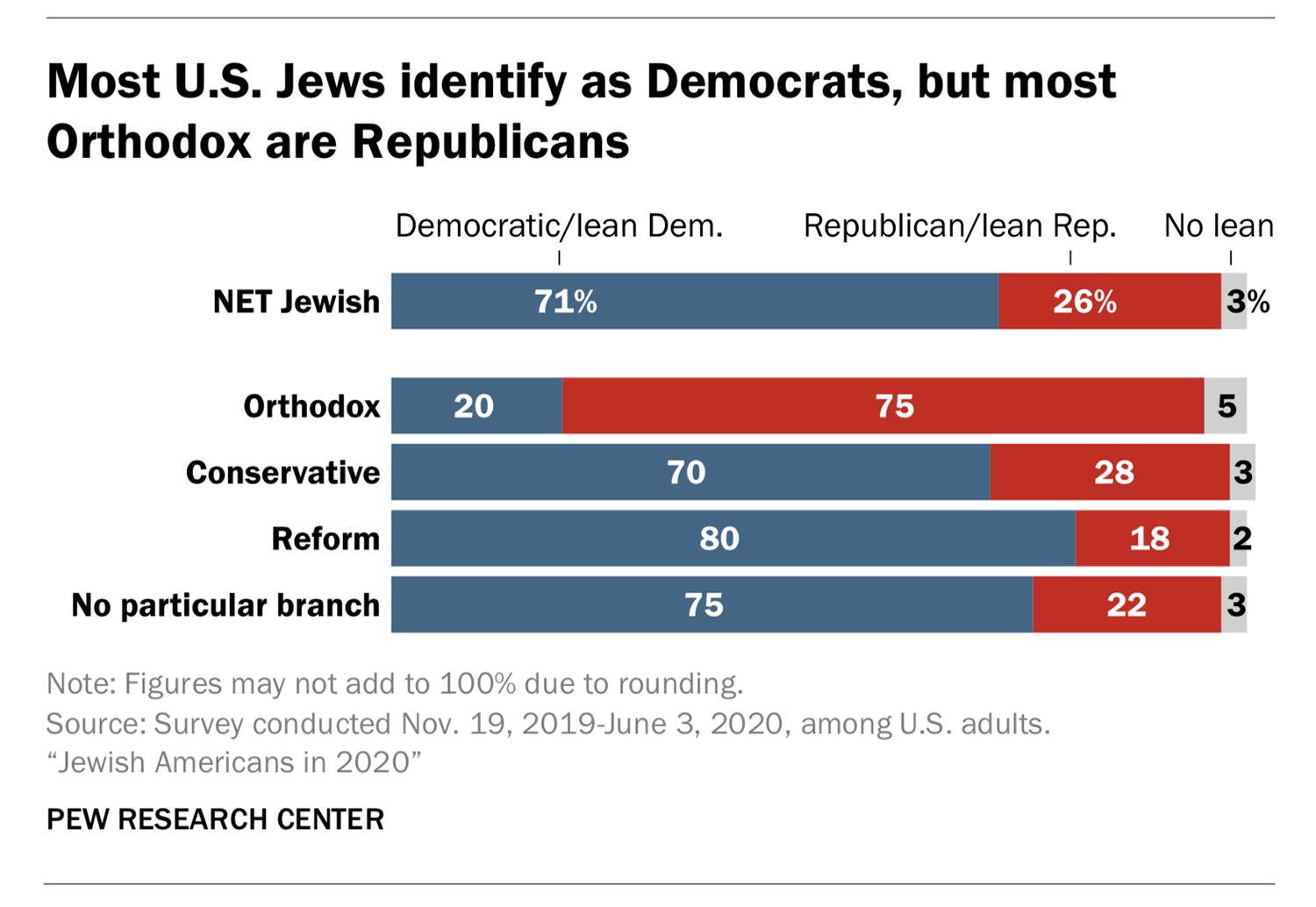 “Most U.S. Jews identify as Democrats, but most Orthodox are Republicans” Graphic courtesy of Pew Research Center

The divide between Orthodox Jews and other Jews is especially stark when it comes to belief in God. Nine-in-10 Orthodox Jews (93%) say they believe in the God of the Bible, compared with 37% of Conservative Jews, 18% of Reform Jews and 12% of Jews with no denomination.

Among the survey’s other findings:

But neither the growing ranks of irreligious Jews nor the diminishing ranks of those who care for Israel appeared at least initially to upset the Jewish religious establishment.

“Nothing in this study points to the end of the story,” said Rabbi Brad Hirschfield, president of the National Jewish Center for Learning and Leadership and an Orthodox Jew. “Many things point to the end of parts of the story many of us still love. The trick is not to confuse those two.”

Reinvention must be the way forward, said Dava Schub, CEO of the Edlavitch Jewish Community Center in Washington, D.C., one of more than 200 such centers across the country that cater to all Jews, with fitness classes, film festivals, book clubs, preschool camps and other social services.

“This reaffirms the importance of having Jewish spaces that see the complexity of human beings for who they are now,” she said. “There is a lot of room to continue to move and grow and evolve.”