(RNS) — Singer Jennifer Hudson, who performed an Aretha Franklin song when she auditioned for “American Idol,” is now set to portray in a movie the woman whose career in some ways is mirrored by Hudson’s own.

One aspect of that reflection is a commitment to faith — which plays its own pivotal role in “Respect,” the star-studded movie set to release Aug. 13 that tells the story of the “Queen of Soul,” who died at age 76 in 2018.

“I could so relate to that, being born in a church and then her career taking her elsewhere,” said Hudson, “but her still staying true to her roots and coming home to that, although it never really fully left her. But it was what carried her.” 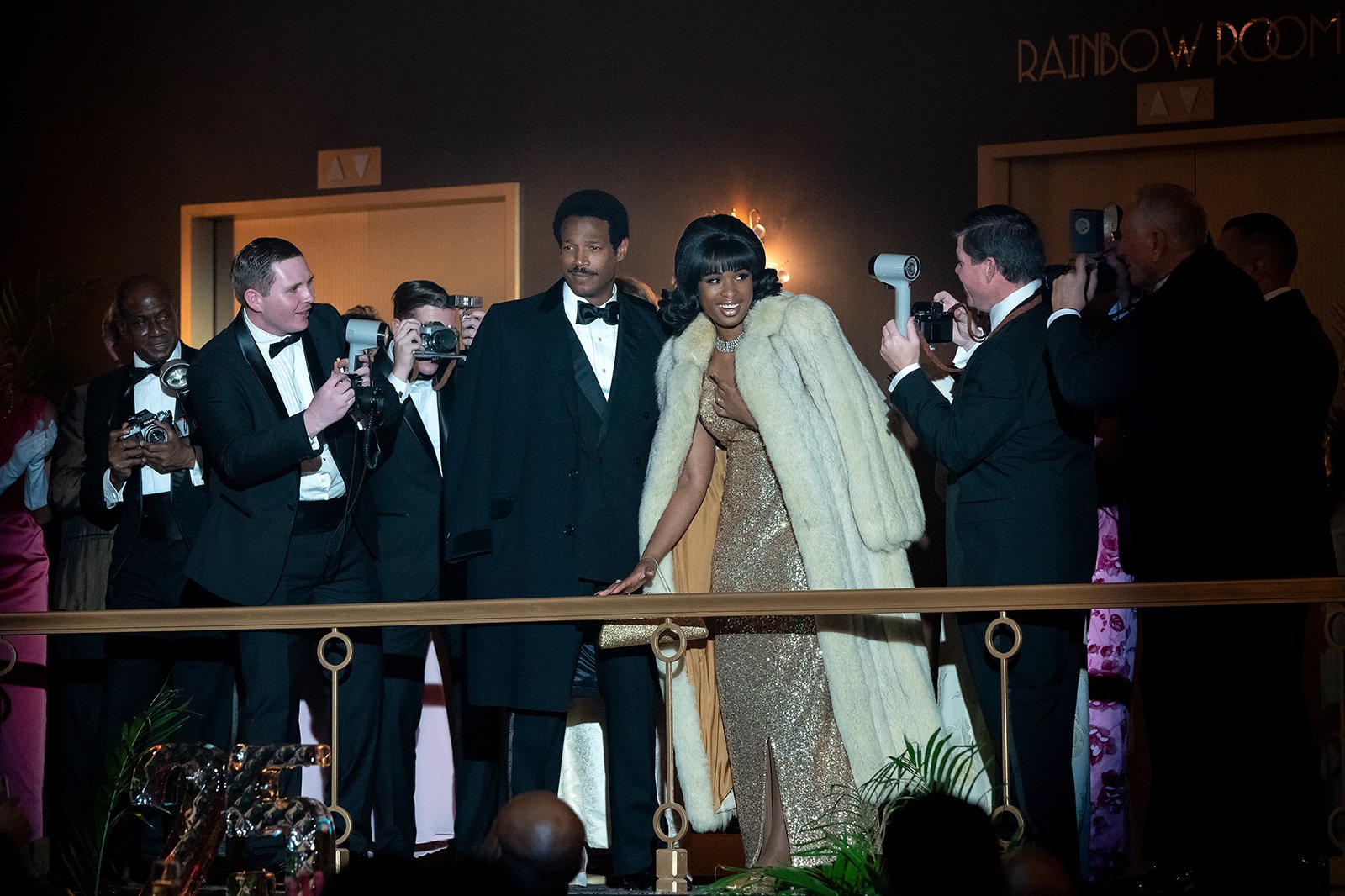 Hudson, 39, was hand-picked by Franklin for the movie role, which follows Hudson’s Oscar-winning performance in “Dreamgirls” and Broadway debut in the Tony-winning adaptation of “The Color Purple.” The two-time Grammy winner is joined by a cast that includes Audra McDonald, Marlon Wayans and Mary J. Blige. Forest Whitaker also stars, as the Rev. C.L. Franklin, the father of the R&B star who became known simply as “Aretha.”

Hudson, who — like the Franklins — is Baptist, talked to Religion News Service about the Grammy Lifetime Achievement Award recipient, some of her little-known history and different ways to sing “Amazing Grace.” 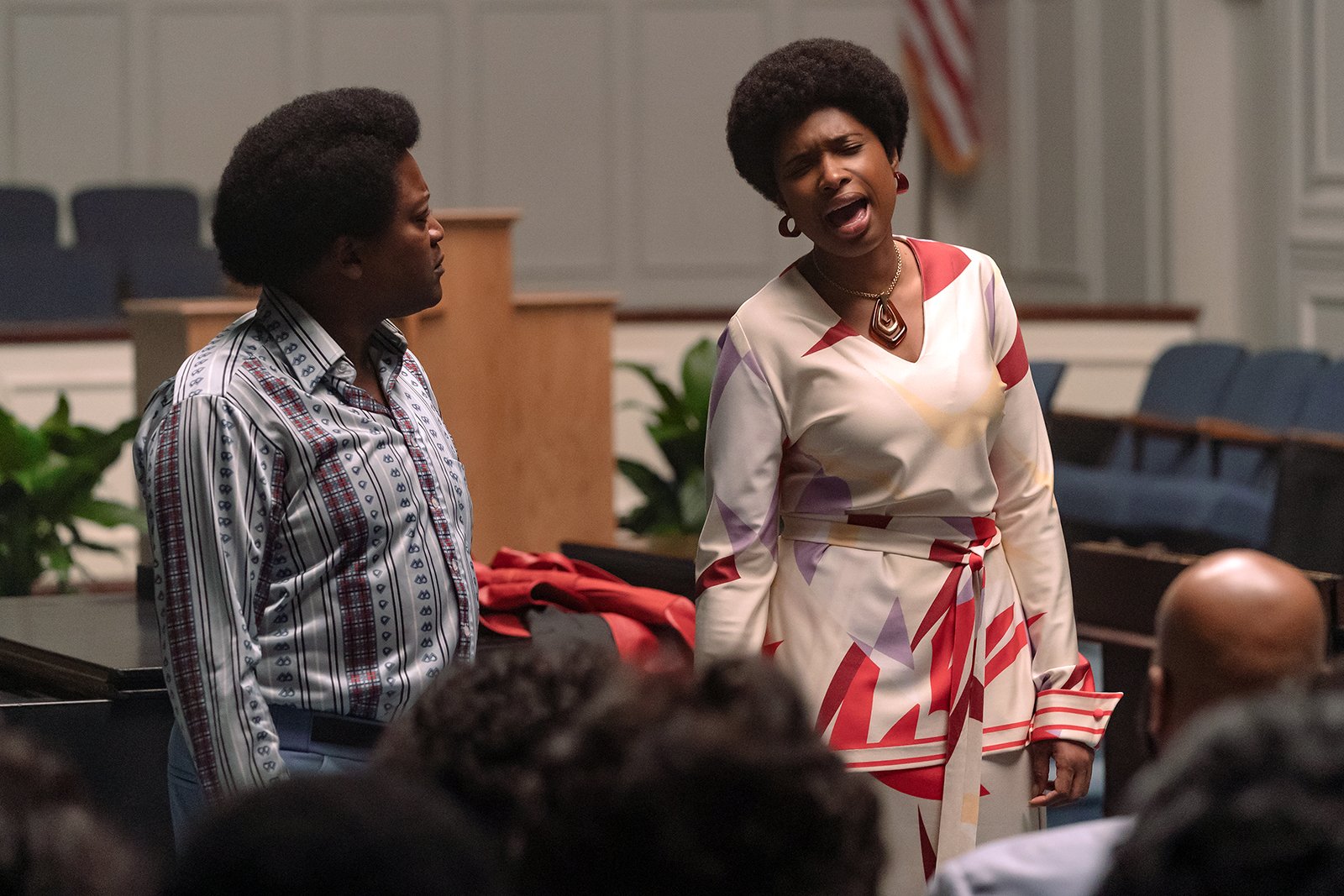 Tituss Burgess, left, stars as the Rev. James Cleveland and Jennifer Hudson as Aretha Franklin in a scene from the film “Respect.” Photo by Quantrell D. Colbert/© 2021 Metro-Goldwyn-Mayer Pictures Inc. All Rights Reserved

Both Aretha Franklin and you grew up in the church, the Black church specifically. How would you say that shaped her and played a role in you depicting her in “Respect”?

Our faith — that was the base of it all. That’s what got me through it. Just standing strong on my faith. We all felt it was very important to maintain her faith throughout the film in telling her story because that was her base and who she was.

The movie delved into lesser-known aspects of Aretha Franklin’s life, including her role as a singer in the civil rights movement. What did you learn about her touring the country with the Rev. Martin Luther King Jr. and the Southern Christian Leadership Conference?

Just that, because that wasn’t something I knew about her, so it was really interesting to learn and to portray and to think that it kind of parallels with the times of today. But it was definitely inspiring to see her doing that, especially in a time like that, and to use her platform, in that way. 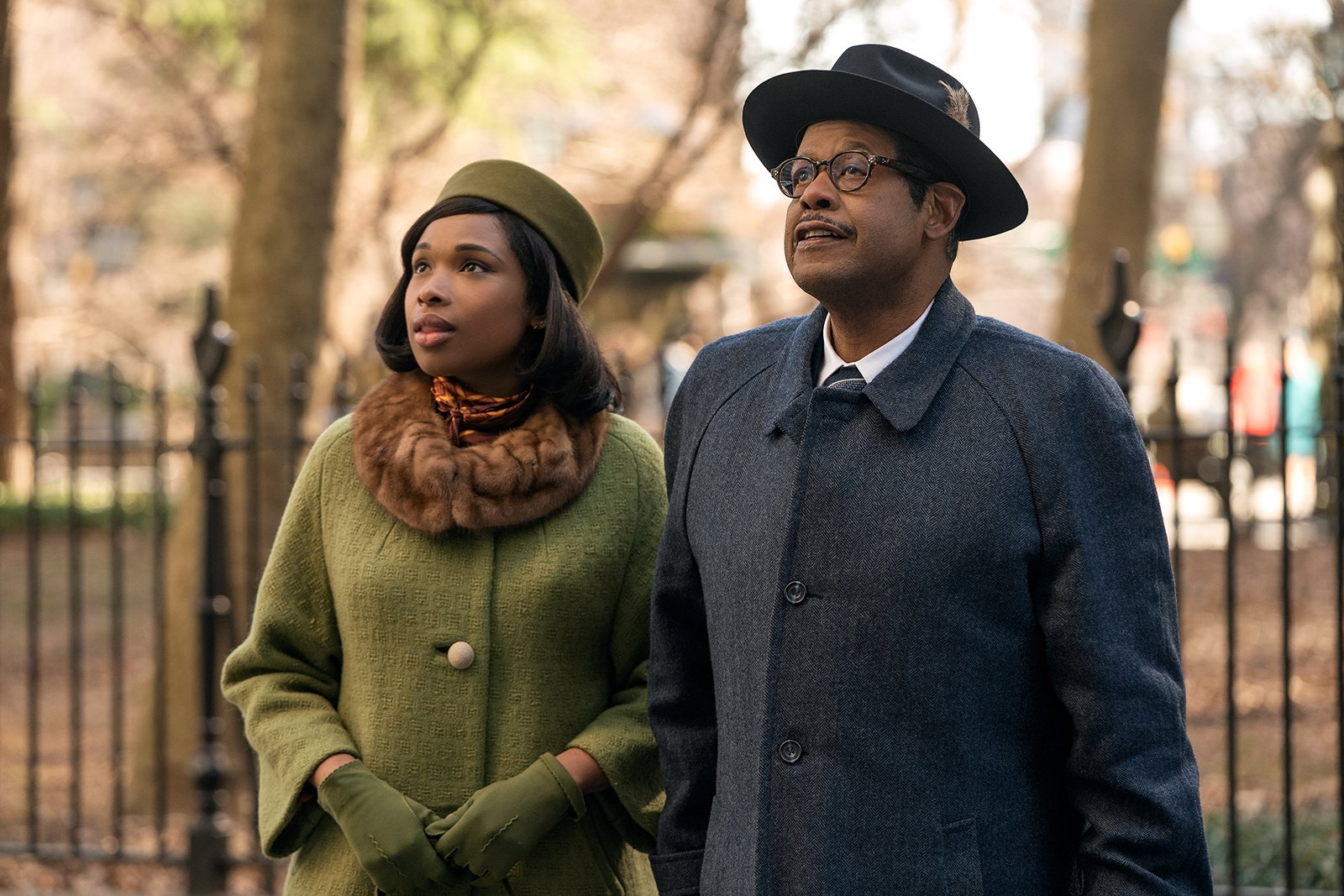 In some ways, she was the ultimate preacher’s kid. Her father, Detroit pastor C.L. Franklin, was a prominent preacher and a mentor to King. But she and her father didn’t agree all the time on some of the decisions she made. How did you view her decisions about how she sang, what she sang, where she sang, being influenced by that background?

I thought it was brave of her and bold. I can’t speak for her, but she was responding to her times, and I think it’s so impactful to be able to want to use her platform to do what she did because I think she understood her purpose and her calling.

The movie includes a depiction of the recording of the live album “Amazing Grace.” How would you explain the experience of singing that hymn in the way Aretha Franklin did — musically, physically and spiritually?

It was definitely a different experience because I grew up singing “Amazing Grace” in church myself — but as myself. So to reimagine it and re-create it from a perspective of Aretha’s, it was an interesting experience to approach it from her journey and to use the “Amazing Grace” documentary as a reference. But the goal was to try to keep it as close to and authentic as possible.

How do you describe your faith life? Are you affiliated with a particular denomination or congregation, and how do you practice your faith?

I’m of the Baptist faith. Born and raised, grew up in Pleasant Gift Missionary Baptist Church, 4526 South Greenwood Avenue (in Chicago). That was our family church. I probably spent every day of the week in church, and growing up, as they say, I was the lap baby sitting on my godmother’s lap in the choir stand. So it’s all I’ve ever known and it’s still very much a part of me.

Do you think that helped you portray Aretha Franklin, because she had a very similar experience?

Definitely, definitely in a lot of ways, a lot of things felt very familiar to me. Even while filming the church scenes I was like, I can’t really even see it as a scene. I don’t think there’s anything that can be scripted so let’s just have church. Luckily, all the musicians and everybody there were live. I call them musicians because I feel as though they were musicians first, then actors. It was as if they were filming us in church. 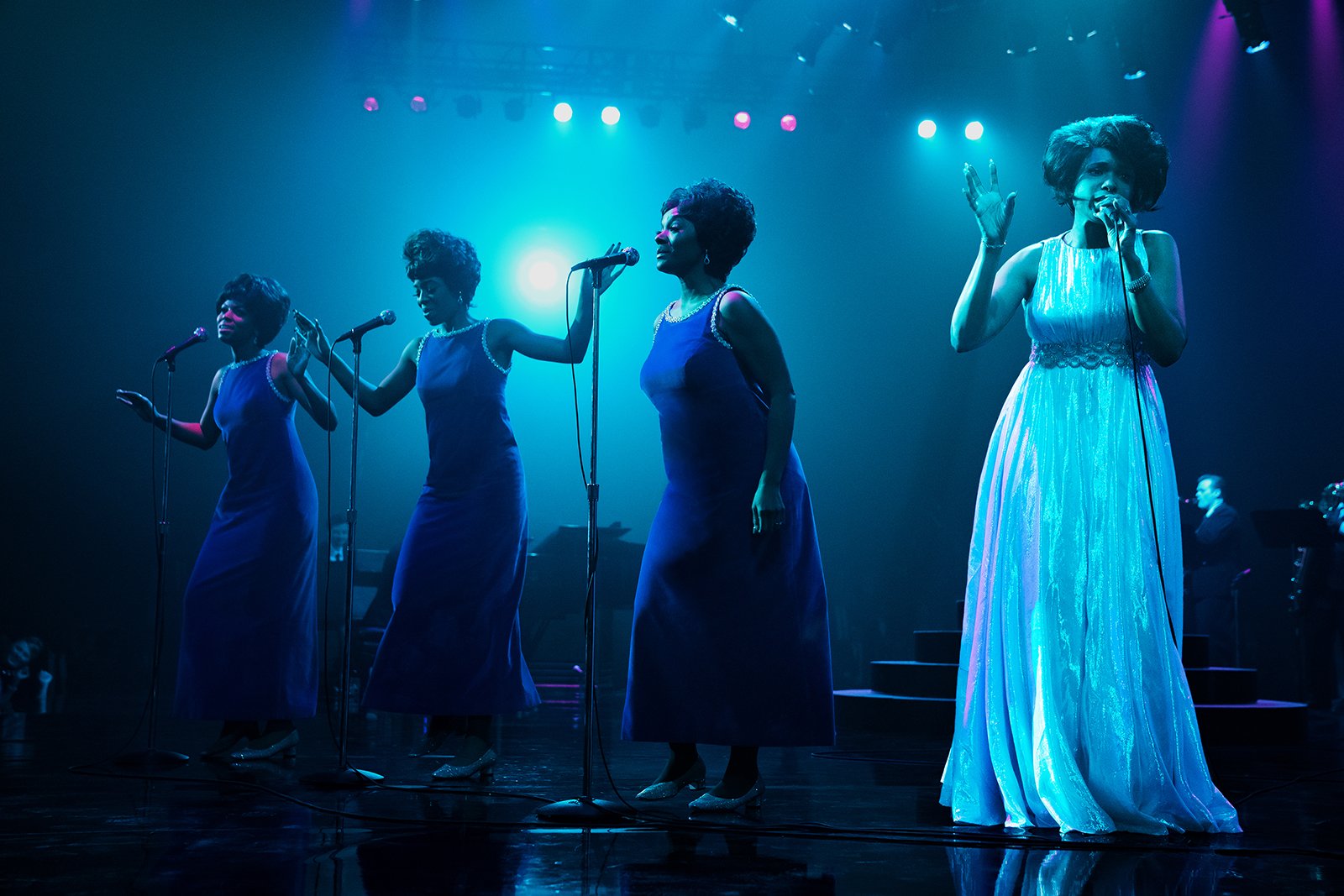 You and Forest Whitaker have had daughter-father roles before, including in “Black Nativity” and this movie, of course. Is there something that those kinds of movies say about the essence of the Black church?

Wow. You’re right. He’s played my father three times, actually. We did three films together. This is the third but two — I’d never thought about it — (were) church-based. I don’t know, but I guess it’s a good combination since we’re doing it again.

Comparing examples of “Amazing Grace,” how would you describe how you approach that song versus how Aretha Franklin approaches that song? Her track on that bestselling album is almost 11 minutes long. So would you sing “Amazing Grace” for 11 minutes, or would you have a different approach?

Oh, my God, that is excellent. Oof. Probably not. (laughs)

But that was the tricky part in the film: How do we condense it for moviemaking? Now, me, I’m not as — what’s the word for it? — I want to say as experienced, like Aretha helped set the blueprint of gospel, OK? I’m a student of it, you know what I mean, although I grew up in church, singing it the same way under the Dr. Watts (hymns sung during the introductory portion of some Black church services) morning service. But that’s praise. You can’t put a time limit on it. So however it comes out you just have to allow it and let it be what it is.