(RNS) — A new survey released by Springtide Research Institute confirms what metaphysical store owners and veteran tarot readers have known since the term Gen Z was invented: Younger Americans, known for fashioning their own spirituality the way they curate their social media feeds, are doing so using well-established alternative practices.

“There is such little ownership over a religious belief system that you’re just told all the right answers to. These other spiritual ways have a more personal connection — those personal ‘aha’ moments,” Jesse Brodka, a 22-year-old Roman Catholic, told Springtide.

Springtide works with partners to develop a random sampling adjusted to reflect national demographics and relies on comprehensive “quality” answers, not simply “bots,” explained Kevin Singer, head of media and public relations for the research group.

While the interest in tarot and other forms of divination often corresponds to a complete rejection of traditional religion, that is not a given. Many young readers continue to identify with a traditional faith, while looking beyond established structures for spiritual growth.

“Our generation has already been distancing ourselves from a lot of institutions,” wrote Zaina Qureshi, a 16-year-old who identifies as both Muslim and spiritual. “The main three Abrahamic religions leave little to our own interpretation of Scripture.”

With tarot and other similar practices, Qureshi said, “we’re open to interpret what we want to think (for) ourselves and make our own guidelines when it comes to spirituality, which is why I think a lot of young people resonate with it.”

According to Springtide’s report, divination practices are most popular among young people who identify as Russian or Greek Orthodox (78.1%), Mormon (69.4%) or Jewish (62.1%). Atheists had the lowest interest in metaphysical-adjacent practices at 34.4%, followed closely by those identifying with no particular faith tradition. 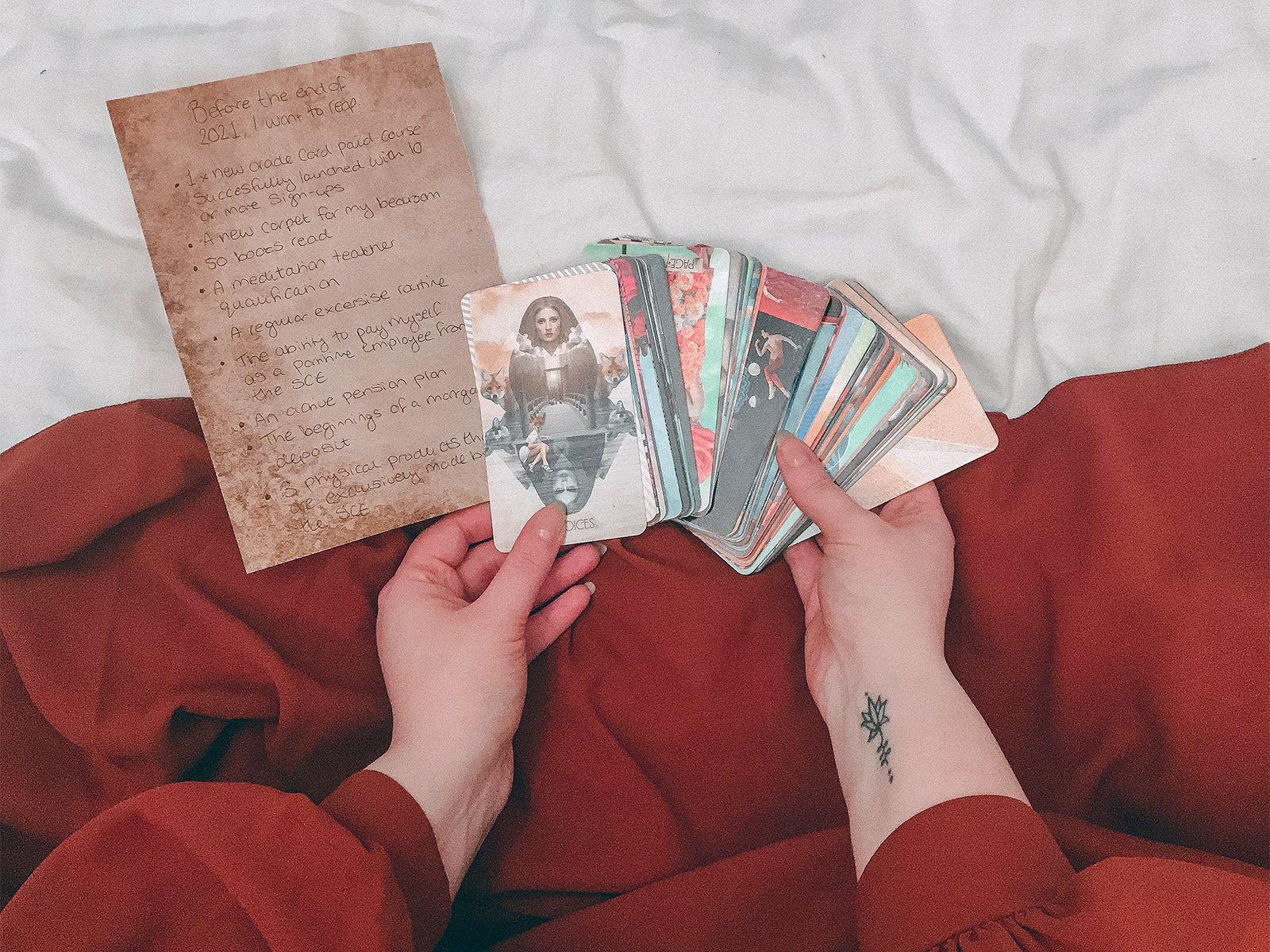 The numbers shift when daily or weekly practitioners of tarot and other fortunetelling arts are separated out from those who only dabble. In these cases, Orthodox youth still rank at the top at 38.8%, followed closely by those identifying as Muslim (34.6%) or Mormon (37.7%).

The popularity of alternative spiritual practices among Orthodox youth is cultural, explained Jenny Haddad Mosher, director of the Telos Project, an effort by the Greek Orthodox Church in America to foster the faith among young people. “Fortunetelling practices are extremely wide-spread amongst people of all religions in Greece, Turkey and the Middle East,” she said. Orthodox youth used to seeing their grandparents reading fortunes in coffee grounds, she suggested, see little to no religious stigma in other incarnations of this tradition.

Springtide’s research did not break out smaller religious groups in which divination is considered central to religious practice, such as paganism, druidry, heathenry, Wicca or African tradition religions. A “something else” category, however, captured 61% of respondents who affirmed their use of “tarot cards and fortune telling.”

The report also did not specify which divination practices were the most common, but tarot is certainly not the only one. The survey used the term “fortune telling,” a phrase often considered by modern tarot readers to be antiquated, but also largely open-ended in its definition. And responses varied.

“Sometimes I feel silly for engaging with crystals. But here they are on my nightstand,” wrote Abby Miserendino, an 18-year-old nondenominational Christian.

Mathew Blasio, a 22-year-old who is religiously unaffiliated and also works with crystals, told Springtide: “I think crystals are like ‘saints’ for young people and spirituals. Sometimes you just need something or someone that is rooted in courage.”

According to observers, interest is growing and many point to the internet — more specifically, TikTok — as a reason.

Springtide Research Institute conducts this survey annually in order to evaluate the religious views of the youngest generations, but it has not asked previously about tarot.

“Too often, the people best equipped to be spiritual guides and mentors for young people are confined to their institutional boundaries, spaces and roles,” Executive Director Josh Packard told Religion News Service in an email. “We do this work to help those trusted adults connect with young people who are exploring, discovering and trying to make sense of the world around them and flourish.”

Members of Gen Z, whom Packard describes as “spiritual explorers,” are seeking to enrich and personalize their religious experience through various metaphysical practices.

“Gen Z is very curious and engaged with the world around them. Increasingly, their interests in spiritual and religious concerns explore spaces outside of traditional institutional boundaries,” Packard said. “While the findings about tarot might be new, they are not surprising in this larger context of Unbundled Faith that we use to characterize Gen Z.”

RELATED: Gen Z is lukewarm about religion, but open to relationships, study shows

This so-called religious unbundling is simply the unpacking, merging and embracing of various elements from different religious and spiritual practices.

In his response, Blasio wrote: “Whether (it’s) a stone in your pocket or a pendant in your hand, there is something that gives you energy from within. If you believe that and you put your faith in whatever it is, it will get you where you want to go.”