LOS ANGELES (RNS) — Homeboy Industries, believed to be the world’s largest reentry organization for formerly incarcerated and gang-involved men and women, is undergoing what board member the Rev. Allan Figueroa Deck, a Jesuit priest, sees as a ‘quantum leap’ in economic stability.

The Los Angeles-based nonprofit founded by the Rev. Gregory Boyle has received $15 million in long-term funding from the state of California and a $20 million gift from billionaire philanthropist MacKenzie Scott, the former spouse of Jeff Bezos.

This is the first time the organization has received this level of funding and monetary gifts, which, Deck said, will “really bring the organization to a new level of capacity” to serve people who have been in prison and involved in gangs.

“It will assure a level of stability in this really important work that it never has had before,” said Deck, who serves on Homeboy Industries’ board of directors.

Founded in 1988, Homeboy Industries draws nearly 9,000 people every year, all seeking a range of services, from anger management and job training to domestic violence support, legal assistance and tattoo removal. It also employs people in its own social enterprises, including a bakery, cafe and diner, as well as a silkscreen and embroidery shop, farmers’ markets and catering services. 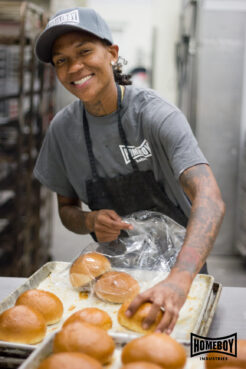 More than 450 men and women go through the organization’s 18-month job training and healing program annually and get paid while they do. About two-thirds of Homeboy’s senior staff are graduates of the program. In addition to Boyle and Deck, actress and activist Jane Fonda and business people such as Oscar Gonzalez, co-president of Northgate Gonzalez Markets, populate its board.

With the funding from Scott, leaders say, the organization will be able to establish an operating reserve, develop supportive housing and create more jobs by expanding its social enterprises.

The state funding will be allocated over a multi-year span and will allow Homeboy Industries to further its partnership with the California Workforce Development Board. Like Scott’s monetary gift, the money from the state will also go toward creating more homegrown jobs.

“We have developed several of these industries, and we need to develop more,” Deck said. “What we’ve discovered is that we can prepare people for work, but frequently we don’t find work because there isn’t any. Part of our response has to be also to generate some jobs.”

The two shots of cash come in the middle of a $120 million capital campaign that foresees Homeboy doubling its impact. This translates into hiring more staff and expanding its campus to help more people. 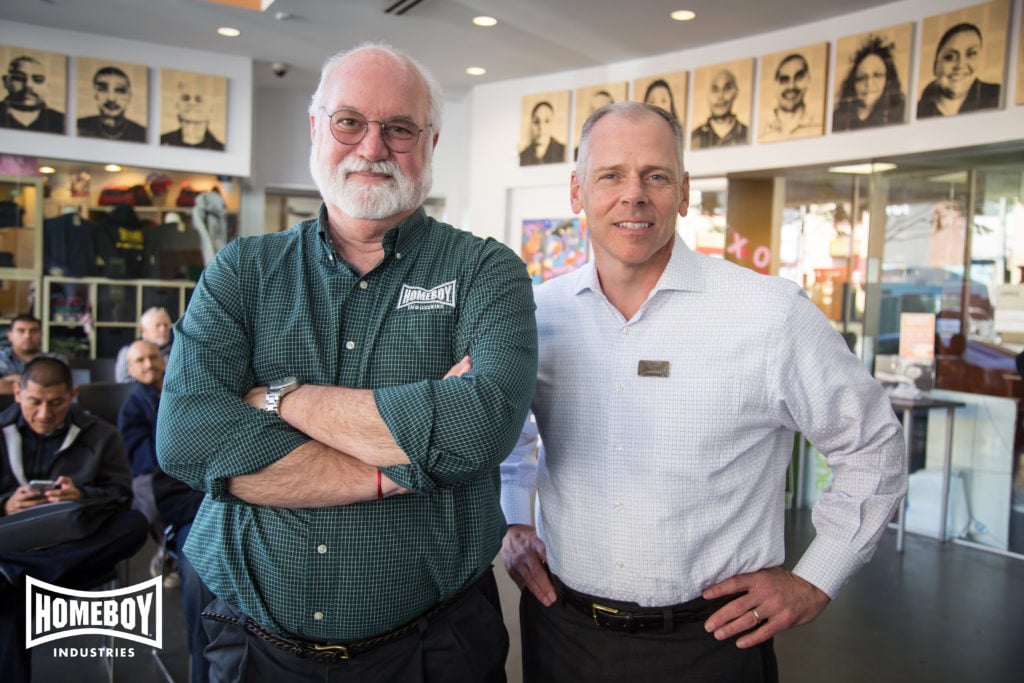 “At Homeboy we have always stretched every penny and helped out as many people as possible, said Thomas Vozzo, Homeboy Industries’ CEO. “While we were financially solid, we were not financially secure into the future.”

Homeboy, he said, is a multi-million dollar nonprofit in which “we raise $30 million (and) we spend $30 million.” The gift from Scott has enabled Homeboy to put a reserve in place, Vozzo said.

In addition, while Homeboy’s focus has been helping people re-enter society after incarceration, Vozzo said they are now looking into solving one of its population’s biggest issues — and California’s: a persistent shortage of housing. The organization is working with a developer and architect to acquire a piece of land that would provide more than 100 beds for people transitioning out of dependency on state institutions.

“As we think about the future, what we’ve realized is that there are still so many people who come in needing our services,” Vozzo said. For Deck, the new level of funding signals a shifting mindset around criminal justice.  He highlighted the words of Pope Francis, who has talked about a church called “to be a missionary,” in a world that is experiencing “a change of epoch,” as noted by America Magazine.

Deck acknowledges that this change is “not just in the church … but rather in our whole world.”

It might sound a bit utopian, Deck said, but he added: “Now what we’re seeing is, this is real money.

“This is real commitment. This is a real track record. These are solid outcomes in dealing with what is a very ongoing issue that we’ve had not just in our country, but in the world, about the whole question of the rehabilitation of people who break the law,” Deck said. “It’s really quite extraordinary.”

News
US Catholic bishops elect Archbishop Timothy Broglio as conference president
Follow us on Facebook!
Submit your photos to RNS