A 21-foot bronze sculpture mounted on a massive 40-foot pedestal, it was primarily funded and conceived by the Ladies’ Lee Monument Committee, a predecessor to the United Daughters of the Confederacy, which has its headquarters in Richmond to this day. The statue’s dedication on May 29, 1890, was accompanied by three days of events (including a choral performance by the Young Men’s Christian Association) that drew an estimated 100,000 people.

Beside the statue, special stands were constructed to contain hundreds of white children wearing red, white and blue who were arranged to create a living Confederate battle flag.

RELATED: Despite white Christianity’s role in Capitol assault, some signs of hope and change

The title of the Richmond Times editorial that week captured how the city’s white residents understood the meaning of this new landmark: “Conquered Though Not Vanquished.” As historian Karen Cox summarized it, “This was not just a monument to the region’s most cherished hero; it was about the restoration of Confederate men’s honor.”

It was also a declaration of a war on the terrain of culture and politics as Virginia, like many Southern states, threw off the reforms of Reconstruction and set up legal and cultural systems of segregation and the suppression of voting by African Americans.

The Lee monument was the down payment by the city’s white elite on a multidecade effort to create the broad leafy outdoor corridor that would eventually be punctuated by five traffic circles, each containing a massive monument to the Confederacy. 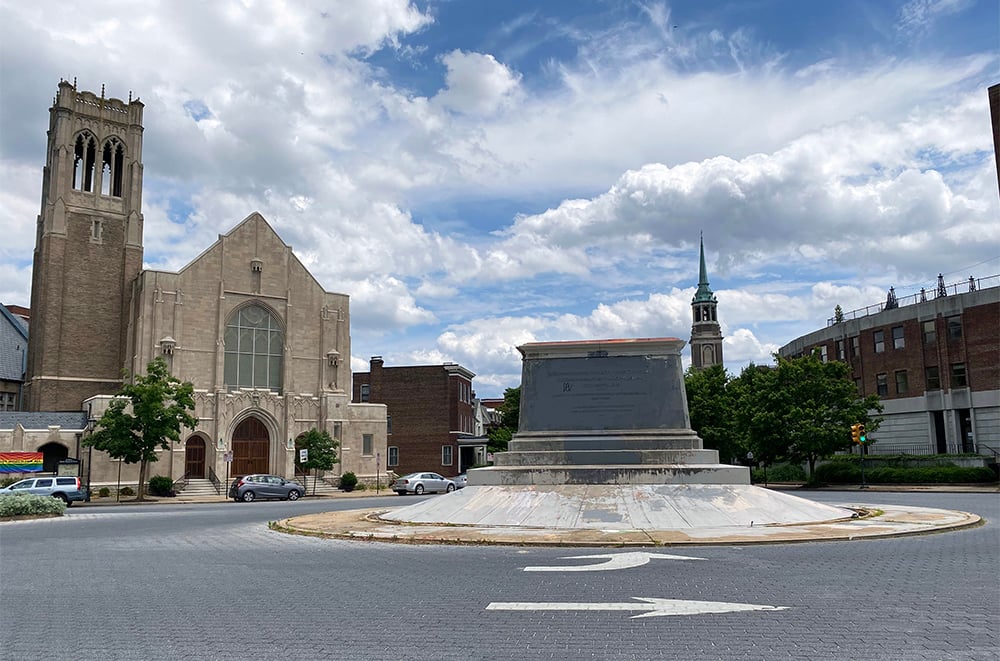 An example of churches surrounding traffic circles for Confederate monuments on Monument Avenue in Richmond, Virginia. The J.E.B. Stuart Monument pedestal remains. The statue was removed in 2020. Photo by Robert P. Jones

Between 1890 and 1930, the wealthier white residents not only moved their homes but also rebuilt at least seven of their churches out along Monument Avenue in the shadow of these monuments. The architectural interplay between monuments dedicated to the Confederacy and sanctuaries dedicated to God performatively expressed the motto emblazoned on the five-story column behind the statue of Jefferson Davis: “God will vindicate.”

Over the past few years, I’ve spent several weeks in Richmond, conducting research in the archives of the UDC for my book “White Too Long” and tracking the unfolding drama as the city and its churches are attempting to extricate themselves from the Lost Cause narrative and create a new story that looks to the future, rather than the past. The juxtapositions, and contradictions, can be jarring.

When I first visited in July 2019, the city had just renamed one of its central streets — one that historically fronted the national headquarters of the UDC along with “Battle Abbey,” originally built to hold Confederate reliquary and now the Virginia Museum of History & Culture — after native son and international tennis star Arthur Ashe Jr. 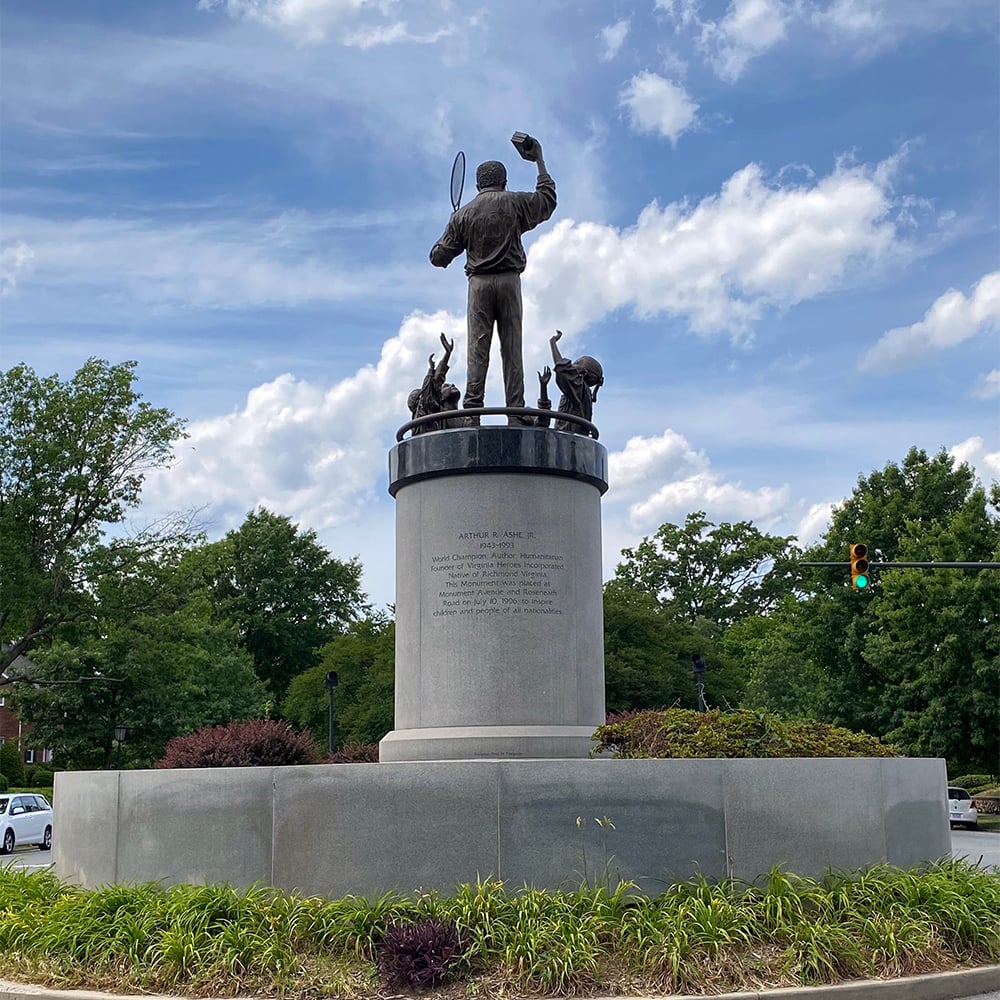 As a youth, Ashe had been banned from playing tennis on Richmond’s public courts because of his race. As an adult, he dedicated his life off the court to international civil rights work, philanthropy and scholarship.

That summer, the VMHC had hung large banners of Ashe outside the building, and there were images of him on large placards along the sidewalk. Just 30 feet or so down the sidewalk in front of the UDC building, half a dozen pro-Confederate protesters had hoisted large Confederate battle flags on makeshift poles over placards that read, “Save our monuments.”

When the UDC archivist handed me her business card, it had already been updated to show their location on “Arthur Ashe Boulevard.” 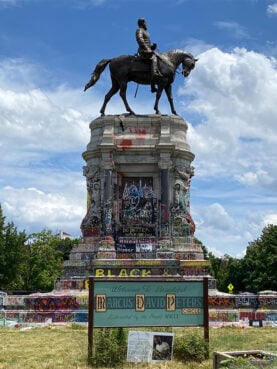 Interestingly, this is not the first time that Richmond’s residents have called on Ashe to oppose Confederate forces in Richmond. In 1996, three years after his untimely death, the city placed a memorial to Ashe on Monument Avenue. The 12-foot-tall statue, resting on a 21-foot pedestal, sits on a traffic circle just beyond the last of five Confederate monuments along the venue. About 500 people attended the unveiling of the monument, with some holding up Confederate flags in protest.

When I visited in 2019, I was struck by how diminutive Ashe seemed in the context of Monument Avenue. His likeness, anchoring one end of the avenue, was roughly half the size of the Lee, Davis and Jackson monuments nearer the city center. But when I revisited this past summer, the statue of Ashe, with a book held high in his right hand and a tennis racket slightly lower in his left (a pose explicitly requested by Ashe himself to emphasize the importance of education) loomed larger.

Four of the five Confederate statues were removed by the city in response to the Black Lives Matter protests of 2020. The statue of Lee had been covered with graffiti that transformed it into an internationally recognized site of performance art for racial justice.

RELATED: The battle over CRT is a manufactured crisis. Here’s why we still have to fight it. 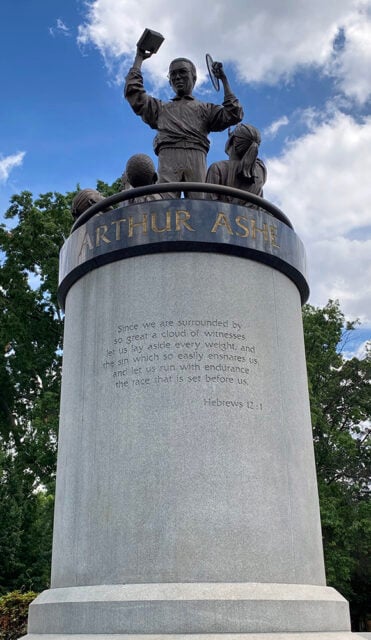 For the first time in 130 years, a trip down Richmond’s Monument Avenue will not entail an involuntary Lost Cause pilgrimage. Rather — and this is the surprisingly moving experience I had biking down that street this past July — the empty pedestals will stand as silent indicting witnesses to the past valorization of white supremacy by a city’s white leaders and churches.

The monument to Arthur Ashe Jr. prominently incorporates a biblical inscription from the New Testament’s Letter to the Hebrews on the front of its pedestal: “Since we are surrounded by so great a cloud of witnesses, let us lay aside every weight, and the sin which so easily ensnares us, and let us run with endurance the race that is set before us.”

I don’t know everything Ashe and his family had in mind with that selection, but today it seems fitting for the last man standing on Monument Avenue.

(Robert P. Jones is the CEO and founder of PRRI and the author of “White Too Long: The Legacy of White Supremacy in American Christianity.” This article was originally published on Jones’ Substack #WhiteTooLong. Read more at robertpjones.substack.com. The views expressed in this commentary do not necessarily reflect those of Religion News Service.) 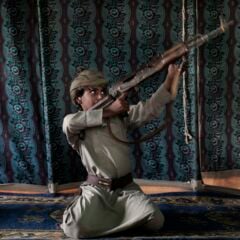