(RNS) — On Jan. 20, 2021, President Joe Biden became the first commander in chief to use the words “white supremacy” in an inaugural address.

Naming “the cry of racial justice four hundred years in the making” and its corollary, “a rise in political extremism,” he called out white supremacy as a “domestic terrorism that we must confront, and we will defeat.”

The backdrop of the U.S. Capitol Building on that sunny, crisp winter day was as poignant as it has been since Abraham Lincoln gave his first inaugural address in front of its unfinished dome in 1861. Devoid of the usual inaugural crowds due to the pandemic, the Capitol’s windows and doors had also been hastily repaired following the damage done by Trump supporters who, encouraged by the outgoing president, staged a violent insurrection on Jan. 6 attempting to prevent the certification of the electoral college vote.

The building’s gleaming white exterior, neatly trimmed with American flags and red, white and blue bunting, and the symmetry of the sparse, socially distanced chairs, presented a surreal contrast to the chaos just two weeks prior.

On Jan. 6, an undulating sea of rioters revealed, with their flags and signs and totems, that this attack on our democracy was animated not just by fealty to a single leader but also by deeper allegiances to both white supremacy and Christianity. Antisemitic tropes and groups were prevalent, including at least one protester who sported a “Camp Auschwitz” hoodie. Wide camera shots of the mob showed large Confederate battle flags.

Shamefully, these 21st-century insurrectionists managed to do something the Confederate Army was never able to accomplish during the Civil War: fly the Confederate battle flag inside the Capitol. One widely shared image showed a rioter with the flag strolling by a portrait of William H. Seward, an anti-slavery advocate and Abraham Lincoln’s secretary of state, who was seriously wounded in the assassination plot that killed Lincoln in 1865.

Comfortably intermingled with these tributes to white supremacy were Christian symbols and rhetoric. There were numerous Bibles, crosses, “Jesus Saves” signs and “Jesus 2020” flags that mirrored the design of the Trump campaign flag.

A Trump supporter carries a Bible outside the Capitol on Jan. 6, 2021, in Washington. (AP Photo/John Minchillo)

Some Christian participants had organized as part of a “Jericho March” in the days before the attack, blowing shofars as they encircled the Capitol, imitating the siege of the city of Jericho by the Israelites described in the book of Joshua in the Old Testament. One video depicted the Christian flag — white with a red Latin cross inside a blue canton, officially adopted by the Federal Council of Churches in 1942 — being paraded into the congressional chamber through breached doors just minutes after members of Congress had been evacuated through underground tunnels.

That flag was familiar to me, as it would have been to many from my church, where it flanked the pulpit along with the American flag, and where, as a child in vacation Bible school, I remember being led in a pledge of allegiance to both flags.

The Atlantic’s Jeffrey Goldberg, who interviewed rioters on the Capitol grounds, wrote that “the conflation of Trump and Jesus was a common theme at the rally,” citing statements such as these: “It’s all in the Bible. Everything is predicted. Donald Trump is in the Bible. Get yourself ready.” “Give it up if you believe in Jesus!” And then: “Give it up if you believe in Donald Trump!”—which elicited loud cheers from nearby rioters.

The US Capitol riot was a stain on U.S. history, ending more than two centuries of pride in an American democracy that had provided 44 consecutive peaceful transitions of power. But these awful events had one value: They put on plain display the unholy amalgamation of white supremacy and American Christianity that lives among us today.

These unsettling connections among white supremacy, white Christianity and support for the former president are not confined to the extremists who attacked the Capitol. There is a strong correlation between voting for Trump in the 2020 election and median scores on the Racism Index — a composite measure of attitudes about systemic racism I developed in my recent book, “White Too Long” — among white Christian subgroups.

By contrast, only 26% of white religiously unaffiliated Americans voted for Trump, a level roughly in line with their much lower median Racism Index score of 29.

Clearly, we white Christians have barely begun the work of reckoning with white supremacy, much less the effort to bind the wounds we have inflicted on our Black and brown citizens or to recover our own ability to live more faithfully in the world. But there are signs of hope and change.

There have been significant symbolic transformations in our cultural landscape, catalyzed by the massive marches in support of the Black Lives Matter movement that erupted throughout the summer of 2020 in the wake of the killing of George Floyd by a white police officer.

In my home state, the Mississippi Baptist Convention, the local arm of the Southern Baptist Convention, came out strongly in support of legislation to remove the Confederate battle flag from our state banner, the last state flag in the country that continued to incorporate it. Dr. Sean Parker, the executive director of the MBC, called removing the emblem a “moral obligation” and “a matter of discipleship for every follower of Jesus Christ.” That legislation passed quickly and was signed into law on June 30, 2020. On Jan. 11, 2021, just five days after the Capitol riots, a newly designed “magnolia flag” rose over the Mississippi State Capitol, marking the first time since 1894 that the Confederate battle flag had not been visible in that place.

The civic landscape of the former capital of the Confederacy, Richmond, Virginia, has also been transformed. During the weeks I spent there conducting research in the summer of 2019, I took regular walks down Monument Avenue, the verdant, linear park built to host five massive monuments to the Confederacy. But across the few summer months of 2020, Black Lives Matter protesters toppled the statue of Jefferson Davis, and Mayor Levar Stoney ordered the removal of three more.

As city workers took away the monument to General Stonewall Jackson, staff members at the prominent First Baptist Church, which directly faces the monument, took turns ringing the church bell. This seemingly simple event marked a significant inflection point in the arc of the bell’s, and the church’s, history.

While today’s parishioners were not of one mind about the removal of the Jackson monument, Pastor Jim Somerville believed the sounding of the bell to be the fitting response, declaring, “It’s time for us to come down on the right side of history again by working for justice and by celebrating people who are so glad to see the symbols of oppression being removed from Monument Avenue.”

Harkening back to Lincoln, Biden noted in his inaugural address that at great moments of national crisis, Americans’ “better angels” have prevailed; that at these turning points, “enough of us came together to carry all of us forward.” The tumultuous events of 2020 have called the question about where we white Christians stand on white supremacy. History is recording a roll call vote that requires us to declare our position. 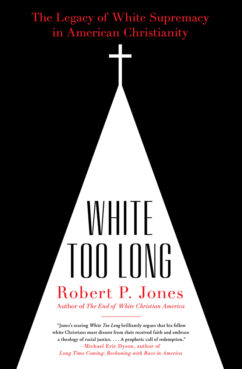 At this time of reckoning, we can remain loyal to our heritage and ancestors through defensiveness and inaction. Or we can rededicate ourselves to the work of handing down a healthier faith and country to our children and our children’s children. But we can’t do both.

My hope is that enough of us will awaken from the fevered nightmare of white supremacy and finally choose a future in which we work shoulder to shoulder with our Black and brown brothers and sisters to achieve the promise of a multiracial, multireligious America.

(This post was adapted from the afterword in the new paperback edition of Jones’s recent book, “White Too Long: The Legacy of White Supremacy in American Christianity.” Copyright © 2021 by Robert P. Jones. Reprinted by permission of Simon & Schuster, Inc. All rights reserved. The views expressed in this commentary do not necessarily reflect those of Religion News Service.)