(RNS) — In September 1996, a young graduate student at Stanford University accompanied her seeker husband on a trip to the holy city of Rishikesh in India. A vegetarian who loved Indian food, she knew nothing about India or its central religious tradition: Hinduism. She had grown up Jewish.

Hot and sweaty from a day of travel and wanting to cool off by the banks of the Ganges, which Indians call Ganga, she walked down to the river to dip her toes in the water Hindus revere as a goddess.

What happened there — and at an ashram just a few feet away — was an intense spiritual experience, an awakening to the divine that changed her life forever.

Sadhvi Bhagawati Saraswati, as she is now known (she does not reveal her given name), quit her Ph.D. program, divorced her husband and became a Hindu renunciate, someone who takes vows of chastity, simplicity and nonattachment. 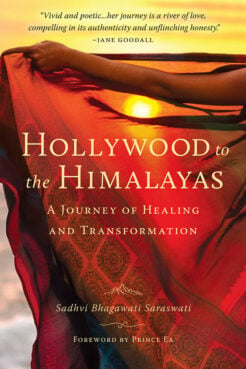 “Hollywood to the Himalayas: A Journey of Healing and Transformation” by Sadhvi Bhagawati Saraswati. Courtesy image

Now she’s written a memoir about her life — “Hollywood to the Himalayas: A Journey of Healing and Transformation” — in which she reveals a less than happy Los Angeles childhood of sexual abuse at the hands of her father followed by the eating disorder bulimia.

But most of the memoir is devoted to the 25 years she has spent at the Parmarth Niketan ashram in Rishikesh working alongside its president and spiritual leader, Pujya Swami Chidanand Saraswati.

There she helped edit The Encyclopedia of Hinduism, a multivolume compendium conceived by Chidanand Saraswati and written by a group of international scholars. But she has also devoted herself to seva, a Sanskrit word meaning “selfless service.” Alongside her guru, the two have undertaken multiple humanitarian and environmental projects to alleviate poverty by installing toilets, building schools and health care clinics, and providing emergency relief after natural disasters. They also travel around the world to teach about Hinduism.

Religion News Service spoke to Sadhvi Bhagawati Saraswati while she is in the U.S. to care for her mother, who suffered a stroke, as well to promote the memoir.

The interview has been condensed for length and clarity.

Why did you decide to write a memoir of your life? What did you want readers to take away from it?

I always knew I had a good story. White Jewish American, Stanford graduate, comes to India at 25 with a backpack because her husband is on a spiritual quest. She has a spiritual awakening, stays back and becomes a Hindu holy woman. That’s a story. But I wasn’t aware until recently about how important it was to tell in its fullness. For 25 years I’d been telling it as a five-minute story or as an 18-minute TED Talk. All the previous versions of this story began when I arrived in India. The only part of the pre-India they included was a 30-second summary of the life of privilege I came from. I realized it was a disservice to not share the full history. It would be of infinitely more value to people who struggle with addiction, depression, anxiety, abuse, abandonment, betrayal, to know I also struggled. That was really the motivation. I travel all over the world. I interact with people of every race, religion and culture. There’s this pervasive sense people have that they’re not worthy of grace, of deep joy and peace because of things that happened to them. I wanted people to know: Grace doesn’t discriminate. Not only had I had all those difficult and traumatic experiences. I wasn’t someone who meditated. I wasn’t a religious person. Nonetheless grace was there. That’s the message I wanted everyone to get. When you talk about grace, a lot of people might think you mean the Christian concept of grace, a free gift usually associated with belief in Jesus. What do you mean by grace?

How common is it for women to become renunciates like you in the Hindu tradition? Are there others?

It’s quite uncommon but not unheard of. There are some lineages that have a lot of women, but you just don’t see them as publicly as you see the men. Percentage-wise it’s minuscule. What’s unusual is women renunciates who live in the man’s world, rather than in the equivalent of a nunnery. 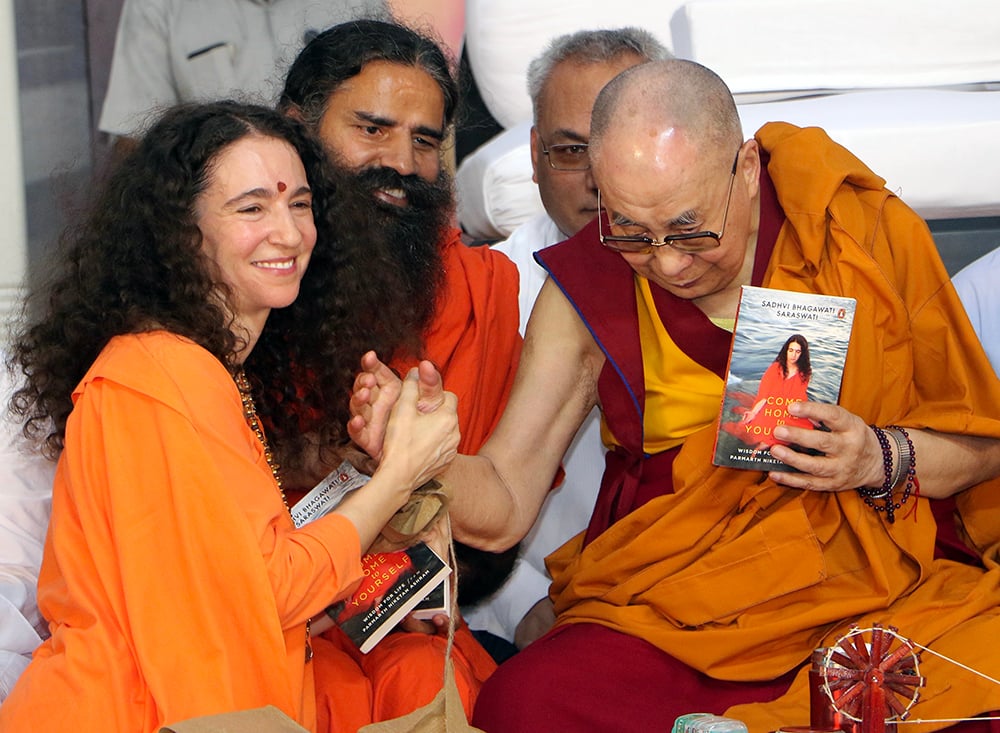 The Dalai Lama at a book launch for Sadhvi Bhagawati Saraswati’s 2019 book, “Come Home to Yourself,” in New Delhi.  Photo courtesy of Parmarth Niketan, Rishikesh

Do you see other women following your path, coming to India on a spiritual exploration and taking up Hinduism?

In the overwhelming number of cases, those who come are touched and inspired and transformed by the culture and the tradition but do not change their religion because there’s nothing in Hinduism that says you have to change your tradition to benefit from this. The teachings are universal. They go back as more grounded, more anchored, more awake. They don’t become Hindus. Even for me there was never any sense of conversion. There’s never been a time when I was asked to leave behind any of my Judaism.

Did you know what the Ganges River — the Ganga — meant in Hinduism when you went there?

I had no idea that Ganga was holy. I didn’t know anything about Indian culture or Hinduism. What I knew was that it was a river and I knew there were mountains. I was always a nature person. I spent as much time in the mountains as I could. I read about Rishikesh in our Lonely Planet guidebook. I saw a river and mountains and I thought: That sounds really nice. When we got there, I was hot and tired. I wanted to put my feet in the river. I came down to the banks of Ganga not knowing anything about the sacredness of this river. It happened really suddenly and unexpectedly. I later learned Ganga is a goddess who lived in the heavens and came down to Earth in this form as a river. She came down to Earth to grant liberation to souls. About a third of India is fed by food grown in the Ganga River basin. So she’s the bringer of life and health as well as the bestower of liberation to souls. It’s also believed a bath in Ganga purifies us from sins we’ve committed in our ignorance. When we emerge from Ganga we are new. Our minds are purified. We have been shown the light and experienced liberation. 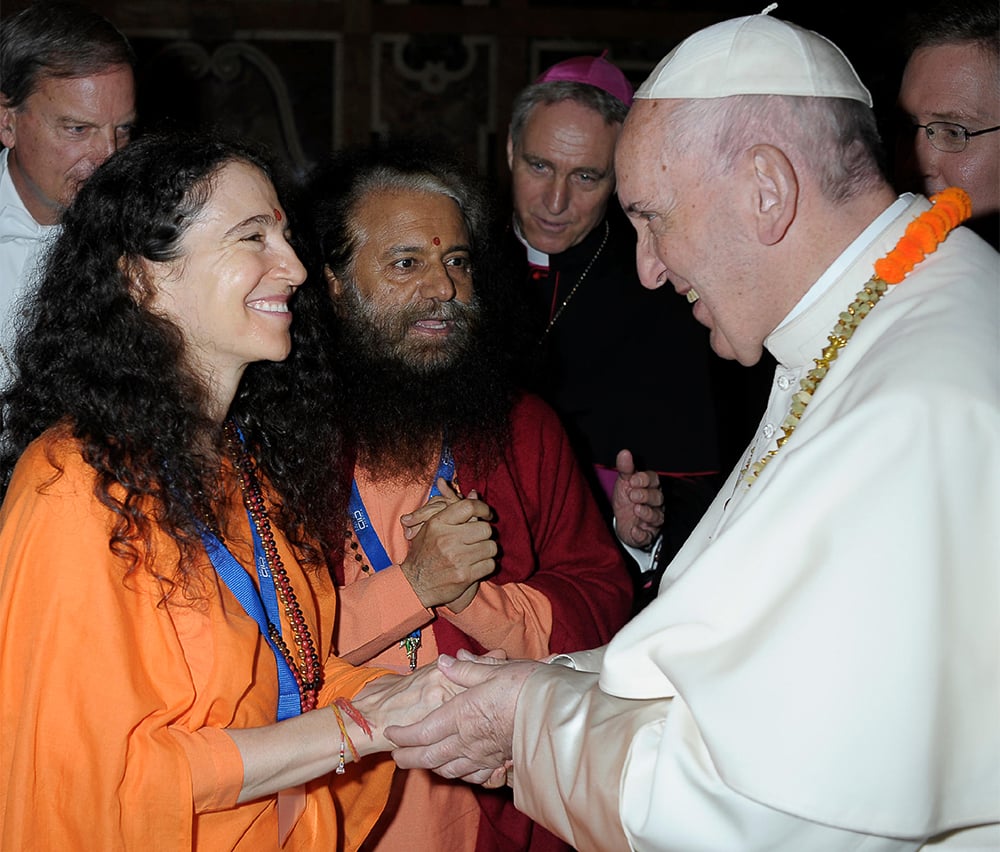 You write that your guru, Pujya Swami, is fighting to clean up the Ganga, which has been so badly polluted. Has it improved?

It’s improving but the population of India continues to expand. There’s a lot of great work being done that our central government leadership is doing around sustainable development. There’s still a lot of need for education. Because Ganga is the goddess, the idea that she is polluted or dirty is seen as a sacrilege. We’ve had to change our communication style. We talk about the trash that washes up on the banks of the river and gets eaten by cows and then the cows die. You have to educate people in a way that doesn’t negatively impact their religious sensibilities; otherwise they disregard it. People might buy a big bouquet of flowers to offer Ganga. They come to the banks of the river and they say their prayers and they’re full of piety and devotion. And then when they go to offer the flowers, they offer them in the plastic bag the flowers came in. Clearly they care, but they just don’t have the awareness to understand how that plastic bag so negatively impacts Ganga. That’s where we’ve had to change the messaging.

Is it harder to live in India nowadays because of the Hindu nationalism promoted by Prime Minister Narendra Modi? 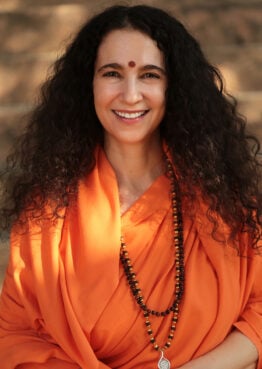 While there has been a resurgence of a lot of aspects of fervor and vigor for the Hindu tradition, it hasn’t been in my experience exclusive or discriminatory against the other. When you’ve got a country of 1.3 billion people, the sheer number of representatives of the BJP government is huge. You’re going to have people say inflammatory things. You’re going to have people who are prejudiced and discriminatory. We’re getting a lot more access to information on what’s happening on the village level that we never had access to before. Now, every altercation and argument becomes something on social media. My feeling that a lot of this is being inflamed and portrayed in ways that are not true on some level and really exaggerated for reasons that have to do with people’s own agendas. I have seen no evidence in any of the platforms I’m on of increased discrimination against the other. What I am seeing is increasing pride in being Indian. There’s a renewed pride of being Indian or coming from India.

How do you see your future?

My prayer to God every day is simply, “May I be a vessel of your grace here on Earth.” It’s like St. Francis’ prayer — “Let me be an instrument of your peace.” The opportunity I have been given to be that vessel, whether purely logistical — in terms of all the charitable and humanitarian programs we run, free education, free vocational training, empowerment programs for women and girls, environmental and disaster relief work — or whether it’s on the spiritual healing level — of spiritual discourses, counseling, writing — it’s been such a blessing. I love India. I love Rishikesh. I love Mother Ganga. I love being in the lap of the Himalayas. I don’t know what’s going to happen in five or 10 years. The only thing I have control over is my own consciousness, my own intentions. If my intention is to be an energetic transmitter of love and peace, then whatever form love and peace are going to take, it feels like a great blessing. At the moment, I feel exactly where I am is the way and the place to have the biggest ripple impact on the planet.

RELATED: In a Maoist-impacted region of India, an Indigenous activist continues to fight in memory of the children she couldn’t save

News
In a Maoist-impacted region of India, an Indigenous activist continues to fight in memory of the children she couldn’t save
Follow us on Facebook!
Submit your photos to RNS