A family on a plantation near Savannah, Georgia, in the late 1800s. The United States emerged from the Civil War fundamentally changed. For the first time, slavery did not legally exist within its borders. What this meant was the question before the nation. Photo courtesy of Library of Congress/Creative Commons

(RNS) — The pew from a church where Black people once were relegated to the balcony.

A pair of stained-glass windows honoring Confederate generals that were removed from Washington National Cathedral.

A Bible used during the study session at Mother Emanuel African Methodist Episcopal Church on the night when nine people were killed.

These and other religious artifacts are among the 175 objects featured in a new exhibition on the Reconstruction period, the time after U.S. slavery had recently been outlawed, at the National Museum of African American History and Culture in Washington. The exhibition, titled “Make Good the Promises: Reconstruction and Its Legacies,” opens on Friday (Sept. 24) on the museum’s fifth anniversary. The exhibition “Make Good the Promises: Reconstruction and Its Legacies” opens Sept. 24, 2021, at the National Museum of African American History and Culture in Washington. Photo by Josh Weilepp/NMAAHC

Curators and other museum experts said those artifacts demonstrate the resilience of African Americans in those times — when more than 4 million people moved from slavery to freedom — and underline the lingering racism that continues in America.

NMAAHC Director Kevin Young, speaking during a virtual news conference Wednesday, said the museum was grateful to receive artifacts belonging to a survivor as well as to someone killed in the 2015 massacre at the AME church in Charleston, South Carolina. In 2017, the National Cathedral removed stained-glass windows depicting Confederate generals Robert E. Lee and Stonewall Jackson that had been installed in 1953. The decision by the Cathedral chapter was prompted by the massacre at Emanuel AME Church in Charleston, South Carolina, and the Unite the Right rally in Charlottesville, Virginia, events that drew national attention to the embrace of Confederate symbols by white supremacists. Photo by Ken Cobb/© Washington National Cathedral

“It’s really powerful to see the parable of the sower being one of the things being taught that day, to see the Bible with the page folded down,” he said, of an item that is on loan for the exhibition. “I think that’s a reminder of this legacy, but also religion as both a balm but also as a site of, unfortunately, this conflict in this moment.”

After the massacre, leaders of the National Cathedral decided to remove stained-glass windows depicting Confederate generals Stonewall Jackson and Robert E. Lee. The Lee window is now on loan from the cathedral in the new exhibition.

The United Daughters of the Confederacy paid for the 1953 window honoring Lee, including a plaque that described him as “a Christian soldier without fear and without reproach.”

The cathedral is scheduled to hold an event Thursday during which it will announce plans for replacements for the windows, which will be designed by a “world-renown artist” and be installed above stonework inscribed with words by a poet who is a Pulitzer Prize finalist.

Spencer Crew, the museum’s emeritus director, said the balcony pew, which is on loan from The Charleston Museum, tells a story of change that occurred during Reconstruction in a church on Edisto Island, South Carolina.

“It says an awful lot,” he said. “That was in the balcony, where the enslaved had to sit and listen to sermons, sermons that probably told them to be good servants, to obey their masters.”

The segregated seating continued until the Civil War. When U.S. troops arrived, white church members left and the newly freed Black congregants were able to worship on the main floor. But white members returned in 1866 to reclaim the building. The African American worshippers departed and started their own church. This is one of the pews from the segregated balcony of the Presbyterian Church on Edisto Island. It was removed when the church was renovated in 2002. On loan from The Charleston Museum.

The exhibition explores themes of religious freedom and changes in economic and political power even as racial violence, including lynchings, terrorized formerly enslaved people.

“Because the church is an engine of so much, civically and spiritually and educationally, it’s recognized as a target,” he said. “So it’s a sanctuary, but it’s also imperiled. And the forces of racism understand that.” 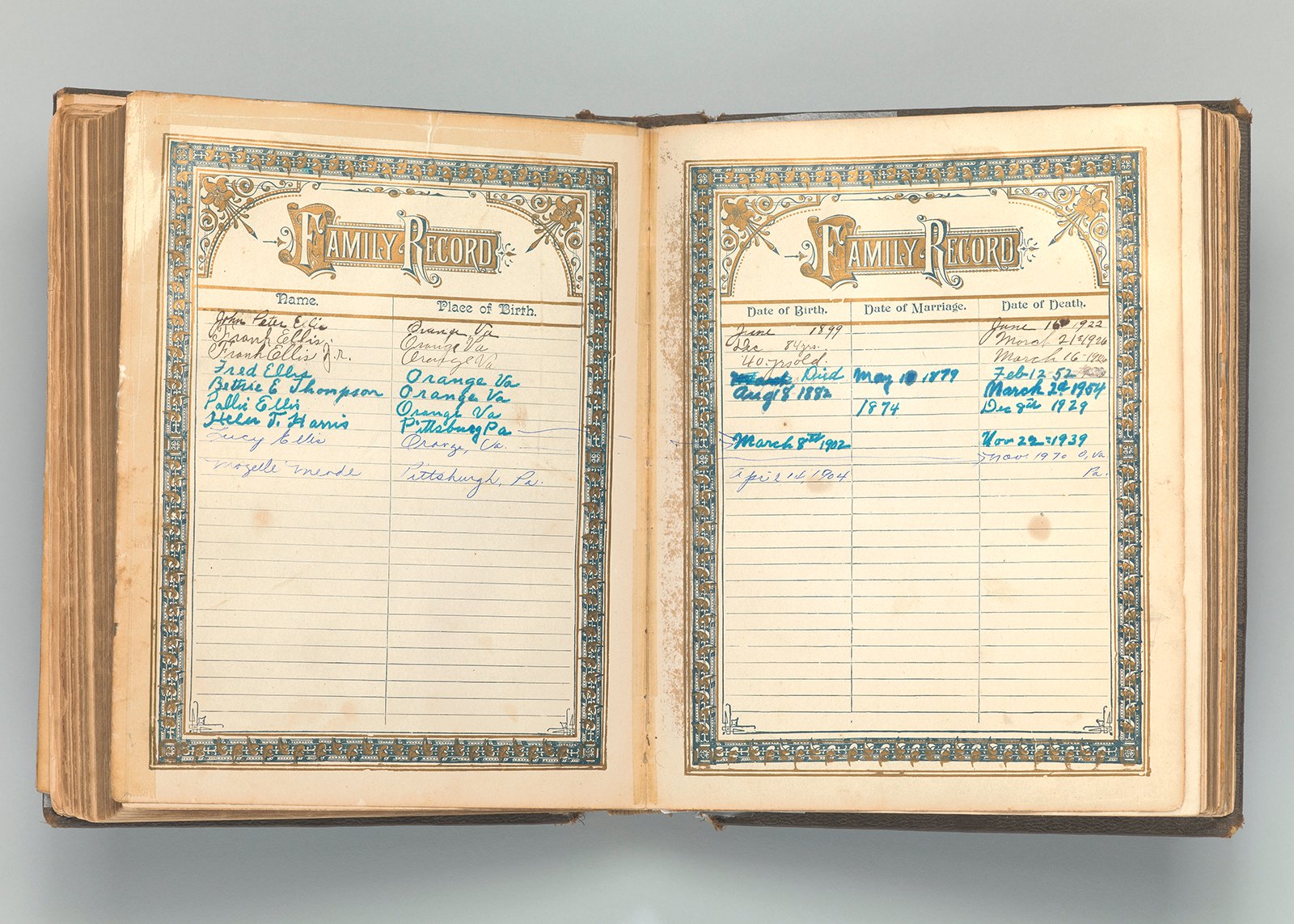 Ellis Family Bible. Clara Ellis Payne’s ancestors were enslaved at Montpelier, the home of President James Madison. After emancipation, her great-grandfather Squire May purchased land nearby in Orange County, Virginia.
The Ellis family Bible was passed down through the generations and contains important information about family members. It was a valuable tool in the reconstruction of the May-Ellis family history. Collection of the Smithsonian National Museum of African American History and Culture, Gift of Clara Ellis Payne