(RNS) — Egypt’s national dish is getting some unlikely global attention. In a word, Koshari is hot right now. The spiced tomato dish has received favorable coverage everywhere from USA Today to Chowhound in recent months. Yet, it’s a national dish with a mysterious past. Unlike the national dish of other nations, the origins of Koshari are much disputed, and it may have come to Egypt by way of religious minorities.

Historians of Egyptian food believe Koshari was brought to Egypt — but in a country that has for millennia been a stomping ground for various empires and an important entry point for trade across the Mediterranean and beyond — no one is quite sure who first introduced the popular food.

Koshari is at its core a hearty mix of carbohydrates: rice, macaroni, lentils and dry-fried onions mixed with a spiced tomato sauce. Chickpeas are added for protein. That might not sound good on paper, but in practice, the results on your plate are quite delicious.

As for condiments, a small slice of lime is often served with the dish, and the tables at Koshari joints also include a garlic-vinegar sauce and often a very spicy chili sauce. Sometimes dried pita crackers are served or available for purchase. Of these, the garlic vinegar is the most popular condiment — you’ll see some diners drown their bowls in it, while others prefer a light garnishing. Koshari is served warm and often tightly packed into plastic tins for takeaway. Experimentation has happened on the margins, and at Koshari Fil-Fil (Koshari Pepper Pepper), a stone’s throw from Cairo’s Tahrir Square, one can purchase the dish with Shwarma meat on top.

It’s a popular belief in Egypt that the dish’s origins come from Egyptian Jews. The theory goes that “Koshari” is a reference to Jewish “Kosher” dietary laws. A quite similar dish known as “mujaddara” has long been enjoyed across the Arab world and consists of rice, lentils and onions. It was enjoyed by Arab Christians during Lent, and Arab Jews traditionally ate it hot on Thursday evening and cold on Sunday.

However, the presence of the macaroni pasta and tomato sauce have led some to speculate it was introduced not by Egyptian Jews but rather by Italian immigrants. On the eve of World War II, only Greek immigrants outnumbered Italians as the largest immigrant group in Egypt. Both languages have given Egyptian colloquial Arabic scores of loan words. Yet, the two theories are not mutually exclusive, as the first Italian immigrants to move to Egypt in the 19th century were Jews.

Amongst academics, the most popular opinion holds that Koshari is, in fact, from South Asia. In this theory, the word Koshari is again a corruption, but of “khichri,” an Indian dish of lentils and rice. This theory holds that the dish was introduced by Indian soldiers at some point between the start of the British occupation of Egypt in 1882 and the end of World War I. It’s true a visit to a Koshari restaurant can feel like entering a military mess hall — in part because such restaurants often serve the dish in metal dishes and bowls, but also because it takes a small army to make Koshari. Each ingredient is labor-intensive, and the creation of a bowl of Koshari can resemble an assembly line.

A similar theory holds that the dish’s South Asian roots were not due to the dietary needs of British colonial troops but rather sustained contact between Egypt, the Arabian Peninsula and South Asia. The theory is that over time, South Asian culinary touches influenced the preparation of mudjarra through trade and the hajj. Aiding this theory is the ubiquitous presence of Koshari in the booming Arabian Gulf cities today. In Doha, Qatar, the popular fast-food chain Petra, which dates to the early 1980s, serves Koshari with curry-flavored vinegar as a condiment option.

Yet, this theory has some problems with it as well, given that over the centuries, it was Alexandria that had the most visitors from South Asia. One would assume the culinary needs of South Asian seamen — often referred to as lascars — would be an issue. Koshari hot sauce is one of the hottest condiments in Egyptian cuisine, which is usually not spiced with chilis. Yet, if there is any place in Egypt where chili-infused food is popular, it would be Alexandria. The city’s most well known local dish is Liver Iskanderani, one of the spicier dishes in Egyptian cuisine, with a recipe that calls for chili, cumin, garlic and cardamom.

Numerous interviews over the past decade suggest that the presence of Koshari in Alexandria, Egypt’s second-largest city, is a relatively recent phenomenon. Indeed, as recently as 2006, it was difficult but not impossible to find Koshari for sale in the city.

Who knows? Arab Jews, hajj pilgrims, Italian immigrants or South Asian lascars — perhaps all contributed to the Koshari we know today. A fitting national dish for the melting pot of Egyptian history and society. 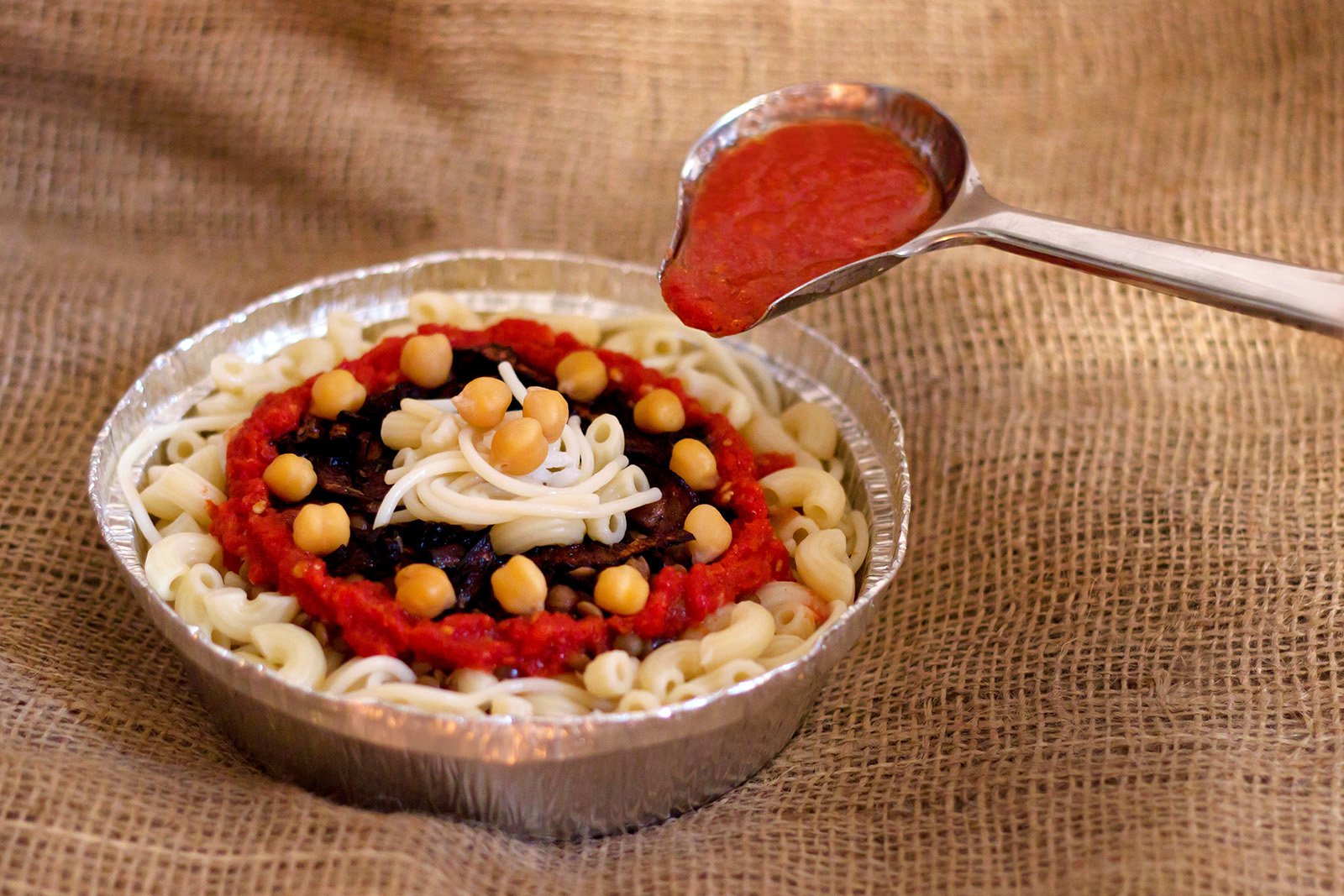 A spiced tomato sauce is drizzled over a dish of Koshari. Photo by Basma/Wikimedia/Creative Commons