(RNS) — Now that the High Holy Days are over, I have been studying a new “sacred” text.

I am talking about the award-winning Apple TV+ series “Ted Lasso.”

Ted’s acclimation to his new geographical location, his new job and his changing family situation is simultaneously funny, poignant and wise.

What can rabbis — and other clergy — learn from Ted Lasso?

Ted Lasso is from somewhere else.

As are most rabbis and clergy. In my experience, most clergy have not grown up in the communities they serve.

Like the founders of Western religion — Abram and Sarai — who make their initial appearance in this week’s Torah portion. They come from somewhere else. They are from across the River. They are Hebrews/Ivrim — the people from the other side, foreigners, the Other.

That might actually be what makes clergy effective — that they are from somewhere else. An older colleague once described his rabbinate as being “one-quarter pastor; one-quarter teacher; one-quarter manager; and one-quarter visiting anthropologist.”

That last item on the invisible job description can be a blessing, because it prompts clergy to be openly curious about what they experience, and then interpret that experience.

It is also a curse, or a mild curse, because, obviously, you have to learn the culture. That is always a learning curve. Depending on geography, sociology and one’s own instincts, that task  can take time and energy — and it often comes with errors and a pile of faux pas.

Trust me. Been there, done that.

Ted is clearly out of his depth in his new situation. His personal style — Midwestern, folksy, aw shucks — clashes with his new environment. This earns Ted the unseemly British nickname of “wanker.” (Look it up.)

In one episode, Ted appears at a local school, and a kid calls out: “Wanker!”

Unfazed, Ted goes on to introduce the team captain, Roy Kent (Brett Goldstein), and the kids enthusiastically welcome him. The contrast to the reception for Ted is palpable.

If this upsets Ted, he does not show it. In that sense, he demonstrates what Jewish mysticism calls tzimtzum — the ability to contract into oneself and to let others have power.

Or, if you will, the words of the Talmud:

Our Rabbis have taught: those who are persecuted and do not persecute in turn; those who listen to contemptuous insults and do not reply; those who act out of love and are glad of sufferings — concerning them, Scripture says: “They that love God are like the sun going forth in his strength.” (Judges 5:31)

Clergy get a lot of criticism. Sometimes, that criticism actually morphs into something like abuse, often from well-meaning people who simply do not know how to better articulate their needs. (To my knowledge, no one has called me a “wanker.” At least, not to my face.)

It takes moral courage and inner clarity to swallow it — to say “this only seems to be about me, but something deeper is going on” — and not to “hit back.”

Ted Lasso is clear about his mission, even if it means being unpopular.

In the first season, Ted benched the popular and narcissistic Jamie Tartt. This did not make Ted particularly beloved.

It did not matter to him. He was able to keep his eye on the ball (figuratively and literally). Ted showed the team that it could win, even without Jamie’s efforts.

Ted’s one-word credo is: Believe. Without some kind of fundamental emunah — faith, belief, security, value system — you simply cannot be in the game. Whatever that game is.

Ted Lasso embraces his own vulnerabilities.

Season 2 spoiler here: Ted has panic attacks. He confronts his demons (with the help of a therapist), deals with his own broken family of origin and learns to be OK with the fact that a supposed friend outed him to a local newspaper.

The literary power of the Ted Lasso series is that each of the main characters embarks on a journey of vulnerability — Ted, Rebecca, Jamie and Roy.

It is not only that Ted wanted to adopt and maintain that British stiff upper lip. It was that he wanted to keep the focus on the team, and not on himself.

Likewise, with clergy. If you believe sharing your vulnerabilities will help others, go for it — judiciously and sparingly.

Because Ted knew, all along, that it was not about him.

His job: getting the players to work together, to hopefully win some games — but mostly, to get them to be the best versions of themselves.

That is an interesting way of viewing our vocation. We have a multileveled team — fellow professionals, a board, the congregation. Like all coaches, we can hope the teams under our tutelage will use their gifts to the best of their abilities. We know when we can push them and when the extra efforts will strain them.

The sports metaphor might be even more powerful than we had imagined.

In a midrash, we read:

That is how the ancient rabbis imagined the great chain of tradition, that went from generation to generation: as a ball that is tossed, playfully, from teacher to student.

Watch “Ted Lasso.” You will laugh. But, as the series develops, you will wind up with a small tear in the corner of your eye.

It is that tear that clergy know so well. 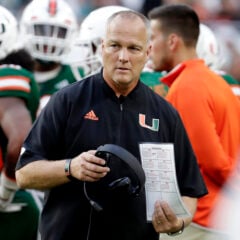 News
Coach Mark Richt in conversation with Maina Mwaura
Follow us on Facebook!
Submit your photos to RNS