(RNS) — A new survey of 15,278 religious congregations across the United States confirms trends sociologists have documented for several decades: Congregational life across the country is shrinking.

The most recent round of the Faith Communities Today survey, or FACT, found a median decline in attendance of 7% between 2015 and 2020.

The survey, fielded just before the coronavirus lockdown, finds that half of the country’s estimated 350,000 religious congregations had 65 or fewer people in attendance on any given weekend. That’s a drop of more than half from a median attendance level of 137 people in 2000, the first year the FACT survey gathered data.

As Scott Thumma, director of the Hartford Institute for Religion Research and the survey’s author, put it: “The dramatically increasing number of congregations below 65 attendees with a continued rate of decline should be cause for concern among religious communities.”

Produced by the Hartford Institute for Religion Research, the FACT survey consists of self-reported questionnaires sent out to congregational leaders every five years since 2000 — mostly through 20 collaborating denominations and faith traditions. It found that mainline Protestants suffered the greatest decline over the past five years (12.5%), with a median of 50 people attending worship in 2020. Evangelical congregations declined at a slower rate (5.4%) over the same five-year period and had a median attendance of 65 people at worship. Catholic and Orthodox Christian churches declined by 9%.

The only groups to boost attendance over the past five years were non-Christian congregations: Muslim, Baha’i and Jewish.

“One of the meta narratives of the last several decades is mainline decline and evangelical health,” said Mark Chaves, professor of sociology, religious studies and divinity at Duke University who conducted a similar analysis known as the National Congregations Study. “It’s clear in recent years there’s been a decline in evangelical churches as well. Mainline decline is not unique.”

The country’s changing demographics may be key to rural and small-town decline. Young people have been moving to urban areas; businesses and industries have also left these communities bereft of resources and talent. 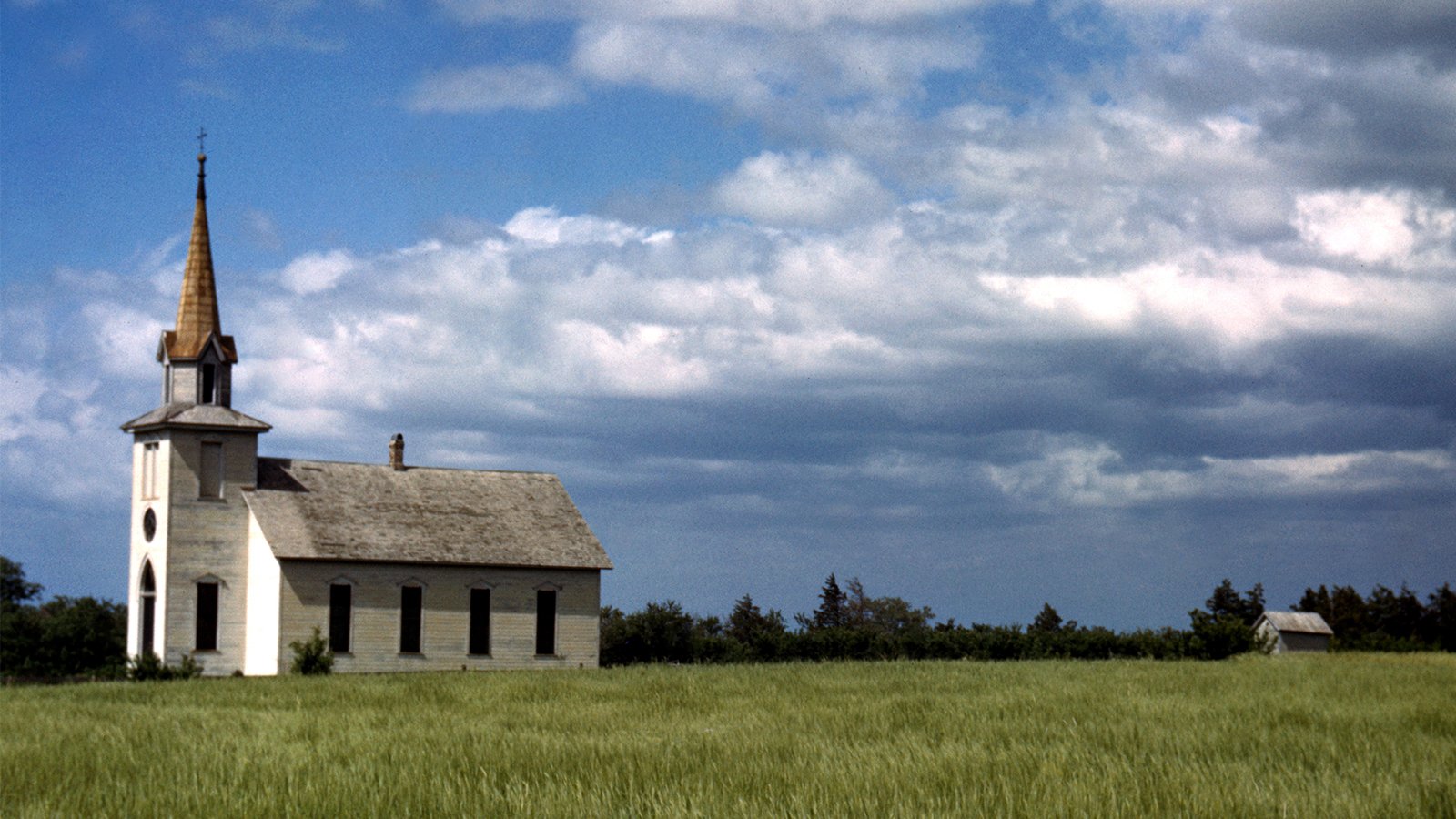 A rural church in Kansas. Photo by John Vachon/LOC/Creative Commons

That doesn’t mean small churches are all going to close. Allen Stanton, director of the Turner Center for Rural Vitality at the University of Tennessee Southern, said smaller congregations need to be judged on their own metrics.

“We’re asking rural churches to be more like large and suburban churches and they’re not designed to be,” said Stanton, author of “Reclaiming Rural: Building Thriving Rural Congregations.”

Measures taken by larger churches, such as increasing the number of small groups or attracting more youth, may not be feasible in these communities, Stanton said. But these congregations can still hold their own, with part-time leaders or volunteers.

However, the FACT survey finds it’s midsize churches with an attendance of 100 to 250 that have declined the most precipitously — the median decline was 12%.

“These congregations were built in the post-World War II era,” said Thumma. “They’re struggling to have enough staff to satisfy everybody. And they don’t have all the programs of larger churches.”

Congregations with 1,500 people in attendance were best able to avoid decline; 71% of those large churches grew over the past five years. That may suggest many people are abandoning midsized congregations for megachurches that have full-time clergy, greater financial and physical resources and a diversity of ages and races among members. 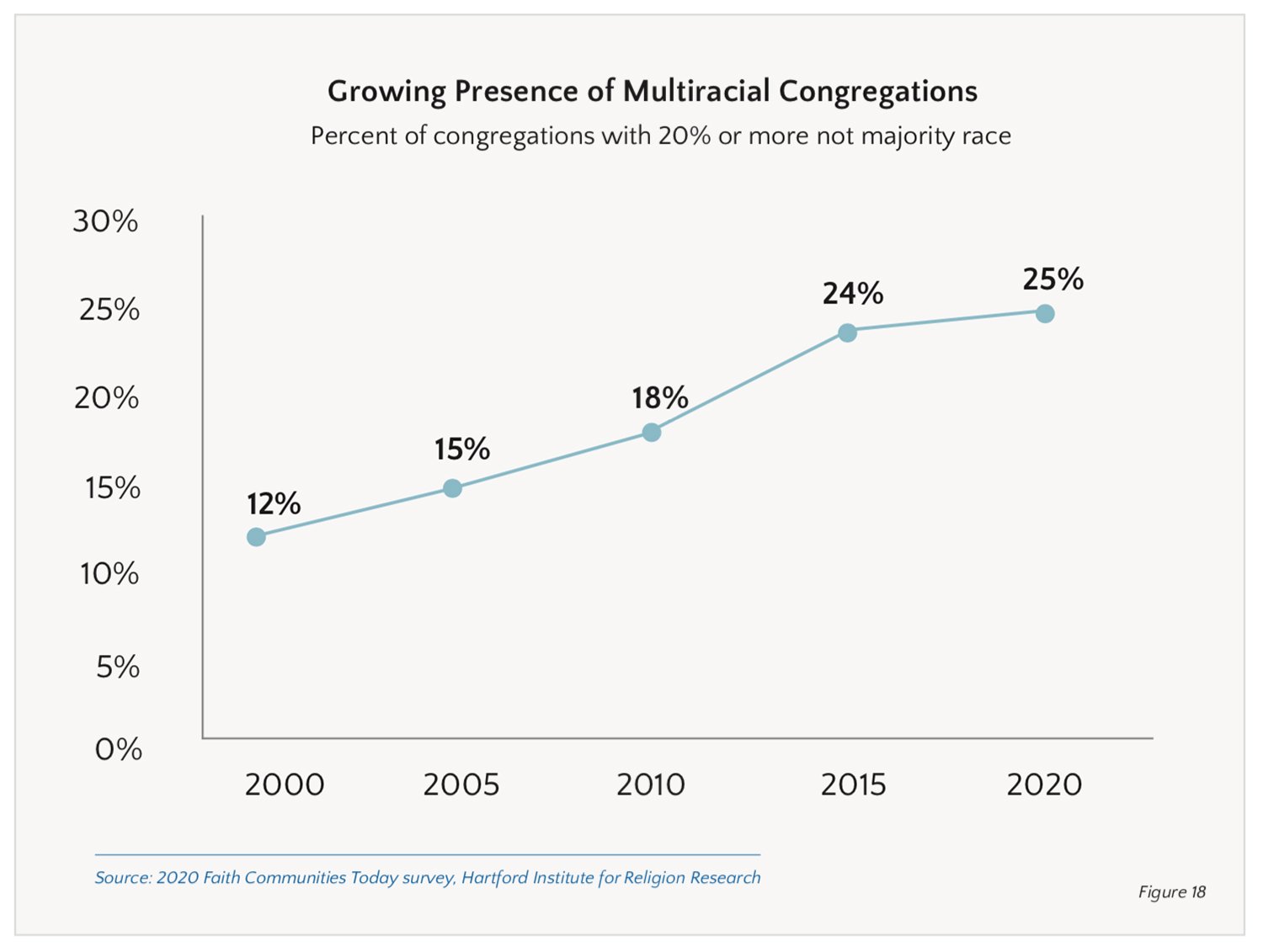 One bright spot in the study: Congregations are becoming more racially diverse. In 2000 only 12% of congregations were multiracial. In the latest survey, the figure climbed to 25%.

The survey defined multiracial congregations as those where 20% or more of participants are not part of the dominant racial group.

Many researchers are now investigating if racial diversity also equals integration in relationships — or if people are simply attending church together. Previous research has also found increased diversity is one-directional.