(RNS) — Pastor Talbot Davis routinely knocks on doors in the neighborhoods around his Good Shepherd Church, offering to pray a blessing over a new home or a new homeowner.

Over time, he realized his congregation did not reflect the growing diversity of the neighborhood. So about 20 years ago, he set about transforming his church, located on the southern tip of Charlotte, North Carolina, near the border with Fort Mill, South Carolina, into a multiracial congregation.

Pre-pandemic, Good Shepherd had a Sunday attendance of 2,000, and has grown to become not only the largest United Methodist church in the Charlotte area, but also its most diverse. About 65% of worshippers are white; the rest, Black and Latino.

Now, a new study published in the academic journal Social Forces suggests Davis’ strategy is not an anomaly. The study, which examined data from over 20,000 United Methodist congregations between 1990 and 2010, found that racial diversity inside a church is associated with higher average attendance, especially when the church is in a white neighborhood.

As the study points out, the 6.6 million-member United Methodist Church is predominantly white. But its racially diverse congregations are faring better than white churches at a time when the denomination as a whole is experiencing declining attendance. The study found that the average attendance at United Methodist churches dropped to 64 people in 2010, down from 81 people in 1990.

“If the Methodist pattern is true of other denominations, pursuing racial diversity is a strategy for growth,” said Kevin Dougherty, associate professor of sociology at Baylor University and the lead author of the study.

That’s a startling result coming on the heels of other longitudinal studies showing that attracting and retaining a mix of different races within a congregation can be challenging. It may also seem counterintuitive to many Americans emerging from a season of racial strife.

At least since 1970, conventional wisdom held that successful churches were racially, ethnically and culturally homogeneous. That year, a book called “Understanding Church Growth” by a Fuller Theological Seminary professor and church growth expert suggested the more people had in common — such as race, education, income and geography — the fewer the barriers would be to Christian conversion and subsequently church growth. 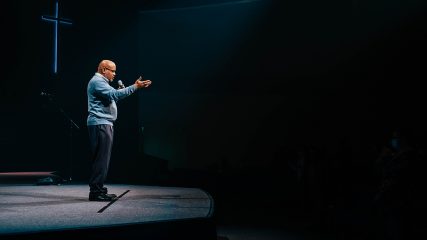 Good Shepherd, started in the early 1990s, was one; it identified suburban, middle-class whites as its target group. But by 2000, the congregation came to the conclusion the homogeneous unit principle was “heresy.”

“We decided to be purposeful in growing a church that foreshadows Revelation 7:9,” said Davis referring to a biblical passage describing heaven as a “great multitude” with people “from every nation, tribe, people and language.”

“If that’s what’s going on in heaven we ought to make every Sunday a dress rehearsal,” Davis said.

Davis hired several Black and Latino associate pastors as well as racially diverse worship and music leaders. One of its services is entirely in Spanish.

Davis thinks the church has a long way to go to continue to diversify. But he is amazed at changes that have taken place so far.

The longitudinal analysis found only an association between congregational diversity and congregational attendance; it did not suggest a cause. But changes in the American landscape may provide some answers. American neighborhoods became increasingly racially diverse between 1990 and 2010. More Americans married someone of a different race. And younger Americans grew more accustomed to interacting with different races and ethnicities in the workplace, in classrooms and socially. 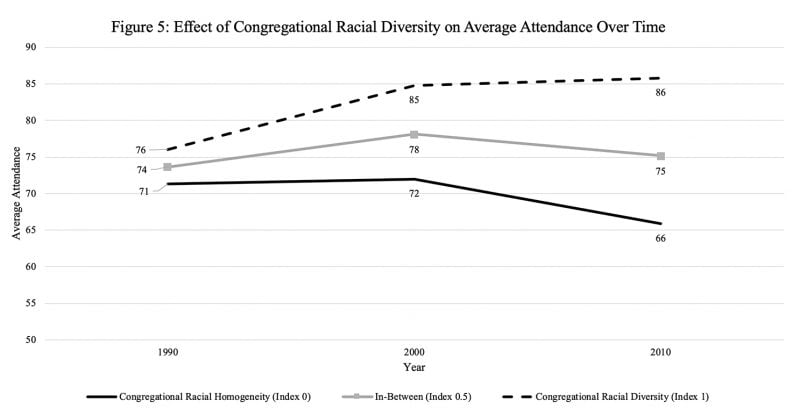 According to this chart, congregations with racial diversity have seen a continued increase in attendance from 1990 to 2010, in comparison to the racially homogenous and in-between churches which have seen decreases in attendance over the same time period. Chart courtesy of Professor Dougherty

“There’s a rising demand for opportunities to interact in diverse settings,” said Dougherty.

“A lot of times, conflict is just what we need, so we come out of our comfort zones and we’re able to be honest and vulnerable with each other,” said DesVignes. “It’s part of what it means to be a family of faith.”

Having a “teachable spirit” and being open to learning is key, she said.

The congregation’s 175 members have identified four core values they are committed to fostering: welcoming, gathering, listening and offering.