(RNS) — Derwin Gray and his wife, Vicki, founded Transformation Church in Lancaster County, South Carolina, 10 years ago, with the goal of gathering a congregation that reflected the racial demographics of the public schools in the area just across the border from Charlotte, North Carolina.

They more than succeeded. The nondenominational church led by a Black pastor and a white woman is about 58% white; the rest are Black, Latino and Asian. (The county is 71% white and 21% Black.)

With thousands of people watching its online-only weekend services, the congregation is thriving. The paper, based on the fourth wave of the National Congregations Study, finds that the number of multiracial congregations in the United States has increased substantially over the past 20 years, a welcome change to the Rev. Martin Luther King Jr.’s famous complaint that 11 o’clock Sunday is the most segregated hour in America.

The way football-player-turned-pastor Derwin Gray sees it: “We have a fundamental belief that the work of Jesus Christ not only forgives people of sins but creates a family of different color skins. This is the family promised to Abraham.” 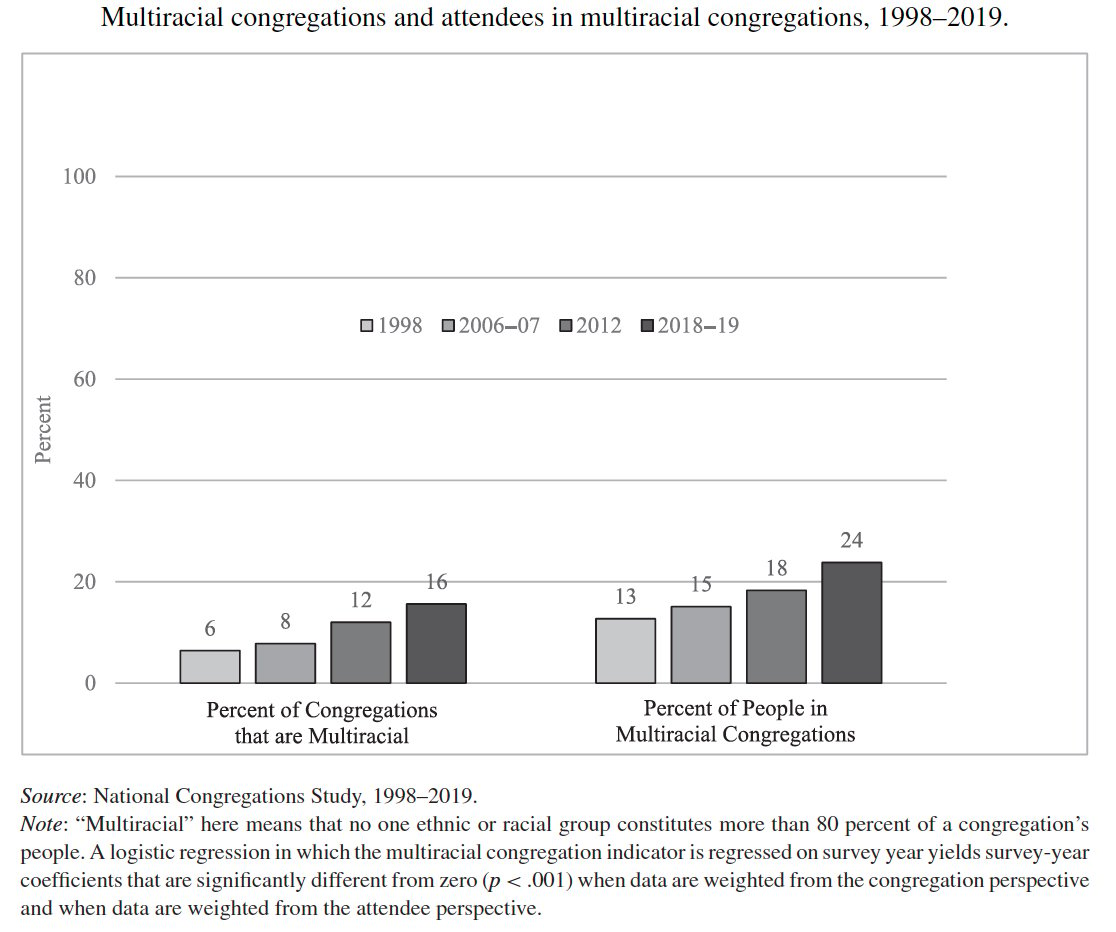 The study also found Black pastors, such as Gray, are increasingly leading these multiracial churches.

The expansion can be found across the Christian spectrum, but particularly among mainline Protestant churches such as Methodists, Lutherans and Episcopalians, and evangelical and Pentecostal churches. Catholic churches saw the smallest growth in multiracial congregations.

The latest wave of the study consisted of a nationally representative sample of 1,262 respondents consisting of clergy or congregational leaders.

“The percentage of Black congregations bringing in white worshippers is less than 1%,” said Kevin Dougherty, a sociologist at Baylor University and one of the study’s co-authors. One reason may be that Black churches are typically smaller and poorer, with fewer programming options.

But in spite of the good news, scholars caution that many multiracial congregations fail. 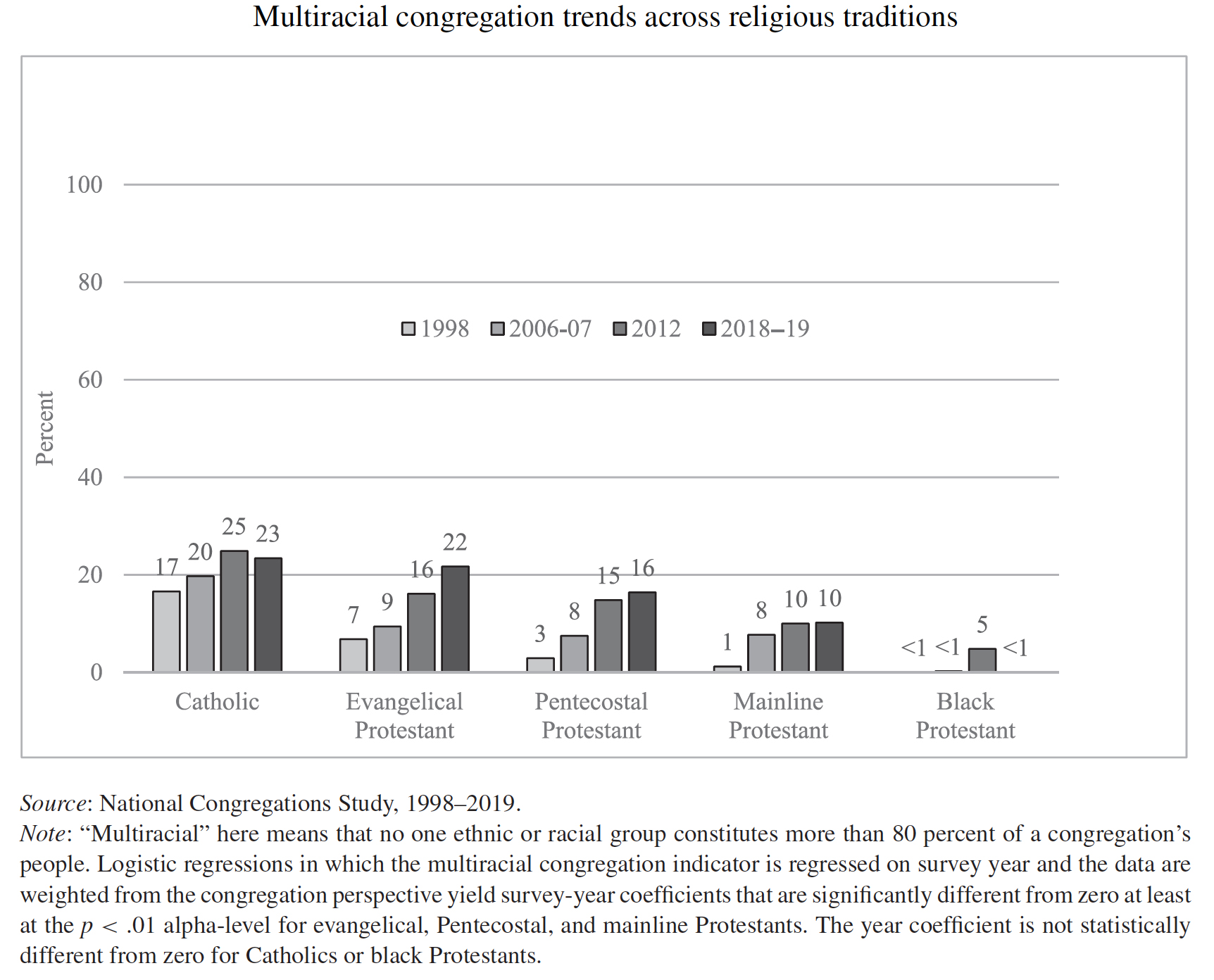 “These spaces can actually create a good deal of pain for people of color,” said Korie Little Edwards, a sociologist at Ohio State University who wrote “The Elusive Dream: The Power of Race in Interracial Churches.”

“In many ways (people of color) are expected to assimilate to the dominant white culture. They end up having to hide or let go of their own cultural preferences and minimizing their ethnic and racial identity.”

White congregations began initiatives to diversify churches in the 1990s as part of an earlier racial reckoning, said Gerardo Marti, a sociologist at Davidson College, but many of the initiatives were superficial. Black people were featured in church literature or website photos. Black gospel or Latin hymns were added to the worship mix. Churches hired nonwhite worship leaders.

“After attempting to do this for quite a while, most churches have given up on the project,” said Marti. “That energy has dissipated. It’s too hard.”

Churches that were conceived as multiracial congregations may be better off, according to Gray. “To truly do a multiethnic church it has to start off as a church plant,” he said.

Even then, the format requires patience and intentionality.

“It’s not a church-growth strategy,” said Ryan Brooks, the Black pastor of Vertical, a 7-year-old multicultural church in Hillsborough, North Carolina. “It’s a gospel strategy. If you want something to grow very big and very fast, make it extremely comfortable.”

In this election season, that has been particularly difficult.

Racial tensions arising from President Donald Trump’s support for white nationalists have stymied diversity initiatives. Many evangelicals have pushed back against the Black Lives Matter movement. In the Southern Baptist Convention, some conservative pastors have made known their opposition to “critical race theory.”

RELATED: Beyond the Most Segregated Hour

“The project of creating a multiracial church has become more suspect among some conservative white churches,” said Marti, author of “American Blindspot: Race, Class, Religion, and the Trump Presidency.” 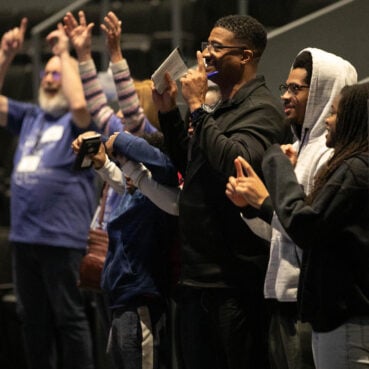 But for those churches that started with an intention to be multiracial, the work is ongoing and worth it.