WASHINGTON (RNS) — The spiritual head of Eastern Orthodox Christians called on religious and political leaders to fight climate change during a visit to the nation’s capital on Monday (Oct. 25), discussing environmental concerns and other issues of religious freedom in meetings with President Joe Biden and various dignitaries.

Eastern Orthodox Patriarch Bartholomew was briefly hospitalized after his arrival in the U.S. over the weekend, but he resumed a busy schedule on Monday that included a trip to the White House.

“The President expressed relief at the Ecumenical Patriarch’s speedy recovery,” read a White House readout of their conversation. “They discussed efforts to confront climate change, steps to end the global COVID-19 pandemic, and the importance of religious freedom as a fundamental human right.”

According to pool reports, Bartholomew expressed “abundant satisfaction” with the meeting. In addition, he said he revealed to Biden plans to team up with Pope Francis, the archbishop of Canterbury and unnamed “Muslim and Jewish religious leaders” to encourage the world to get vaccinated against COVID-19.

“We shall make an appeal to the whole world to facilitate the vaccination of everybody, especially poor people and rich, wealthy countries who have the poorest ones, so that everybody may be safe,” the patriarch said, adding that Biden “accepted our common initiative with great satisfaction.” Biden is also slated to meet with Pope Francis later this week.

Bartholomew, the patriarch of Constantinople who is sometimes referred to as the “green patriarch” because of his environmental advocacy, also met with Secretary of State Antony Blinken earlier in the day. A readout of their meeting from church officials said the spiritual leader of some 200 million Orthodox Christians again raised the need for “immediate political action in response to the climate crisis,” but also expressed concern about the plight of persecuted Christians in the Middle East.

The patriarch closed out his day — which also included a virtual address to the Museum of the Bible — with a visit to Georgetown University, where he met with Cardinal Wilton Gregory, head of the Roman Catholic Archdiocese of Washington.

“I would like to join the Holy Father, Pope Francis, in offering my warmest congratulations on your 30th anniversary of your election as archbishop of Constantinople and Ecumenical Patriarch,” Gregory said. “Your presence among us is a blessing for Georgetown University, the Roman Catholic Archdiocese of Washington and our nation.”

Bartholomew responded by noting his “brotherly friendship” with Pope Francis and pointed to their shared concern to “work for the protection of the environment.” 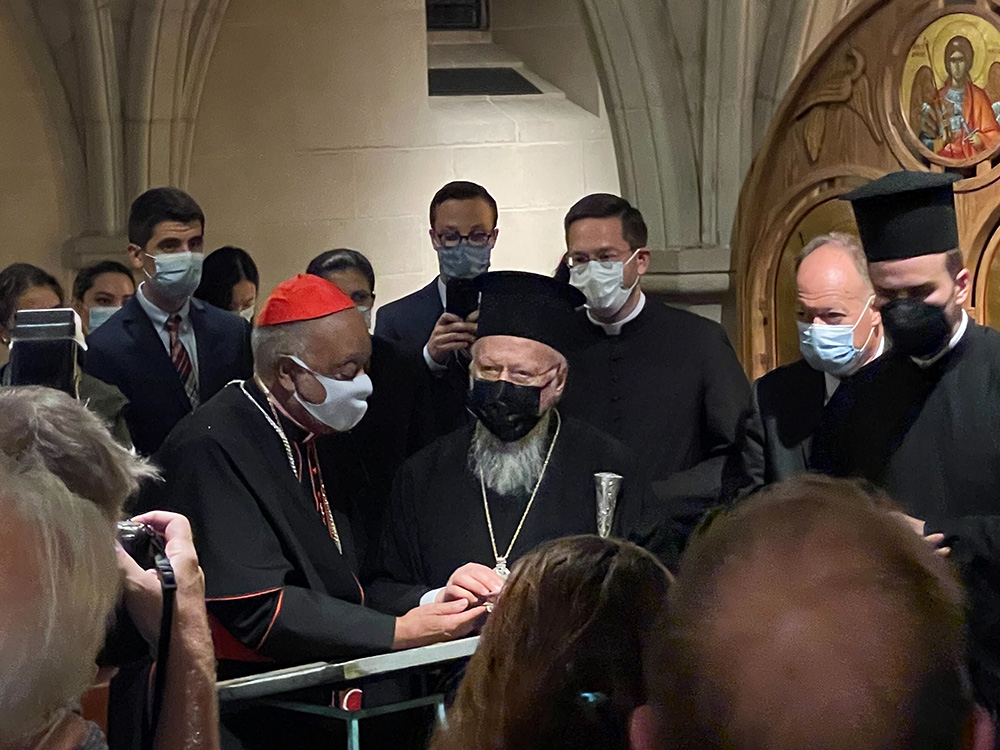 While offering remarks in a dinner that followed, the patriarch again turned his focus to climate change, insisting care for the environment is a religious duty.

“There have been those who have not been able to grasp the connection between the Creator, creation and the human person — as the mediating steward, as the priest of creation,” he said, adding that environmental advocacy “is not an ephemeral exercise” but is mandated by the gospel, which commands Christians to be “faithful and wise stewards of all with which God has entrusted us.”

He added that his environmental campaigns are not simply a reaction to climate change but “constitute a vital expression of the core identity and ethos … of the ecclesial event.”

Bartholomew is scheduled to meet with members of Congress on Tuesday.