(The Conversation) — India’s position as a secular nation is under threat.

Under Prime Minister Narendra Modi’s pro-Hindu nationalist Bharatiya Janata Party, the country’s 200 million Muslim minority population has been increasingly targeted. Over the past few years, so-called cow vigilante groups have attacked Muslims for consuming beef, an act that many Hindus consider to be sacrilegious.

The ruling party has also come down heavily on free speech.

Concerned by these developments, 53 American universities, including Harvard, Stanford, Princeton and Columbia, co-sponsored a three-day conference, “Dismantling Hindutva” in September 2021 in which scholars discussed the rise of Hindu nationalism.

India is the world’s biggest democracy. But according to several experts, that democracy is under threat.

As a scholar of South Asian affairs, I’d argue that it is important to understand that India’s move to a Hindu identity has roots in the early 20th century, when it was part of the British colonial empire.

In 1923, an anti-colonial revolutionary, Vinayak D. Savarkar, first invented the term Hindutva, which loosely translates to “Hindu-ness.” This view emphasized that a native of India, even if not a Hindu, could fully embrace the geography, languages, and religions of “Mother India.”

A movement inspired by a non-believer

Savarkar was an atheist, with little interest in religion, other than for political use. In 1910, he was sentenced to life imprisonment for his participation in the plot to assassinate the British Assistant Secretary of State Curzon Wyllie.

It was during his imprisonment that Savarkar wrote his foundational treatise, “Hindutva: Who is a Hindu?”

Christophe Jaffrelot, one of the most noted scholars on Hindu nationalism, calls Savarkar’s work “the first charter of Hindu nationalism.” Savarkar sought to unite religions native to India against Muslims and Christians, who were considered to be outside invaders.

Back then, Savarkar wanted to call the Indian subcontinent the great Hindu Rashtra, or nation encompassing a common geography, religion and culture. Adherents of other religions, such as Buddhists, Jains and Sikhs, would simply need to pay homage to Hindu culture and accept a national identity within the larger Hindutva framework. The same would apply to “foreigners,” such as Muslims and Christians, as long as they did not attempt to impose their own rule.

At first, the concept of a Hindu identity did not include a religious creed. Instead, it espoused bringing forward identity politics based on the perceptions of dominant ethnicity and nationalism.

The Khilafat movement, a 1919 pan-Islamist campaign that encompassed the Islamic world and had a profound impact in uniting the Indian Muslim community, radicalized Savarkar.

The unity of Indian Muslims during this period in contrast to the divided caste-based Hindu community amounted to a threat, according to Savarkar, and gave rise to a political party, the Hindu Mahasabha, in 1921, in which he was a leading figure.

In his 1963 book “Six Glorious Epochs,” written shortly before his death, Savarkar stated that Muslims and Christians wanted to destroy Hinduism. He also contended that India should enforce the kind of authoritarian rule that was imposed in totalitarian Germany, Japan and Italy during World War II. 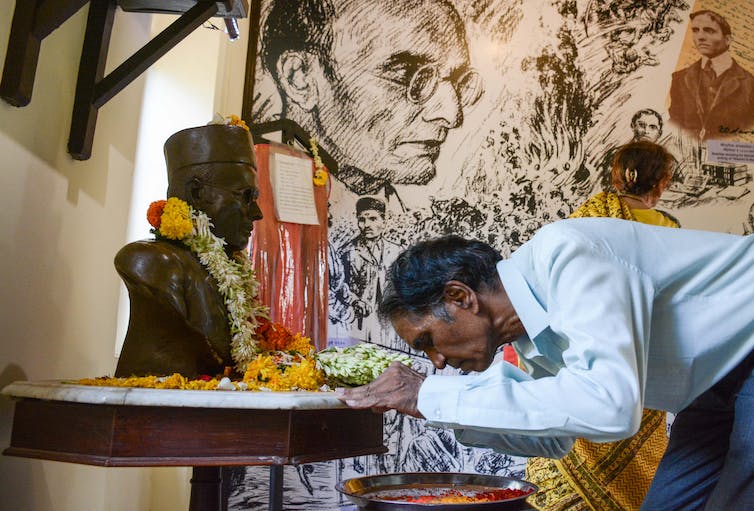 Savarkar also believed Muslims in law enforcement and the military were potential traitors and their numbers needed to be kept in check.

In 1925, another leader, K.B. Hedgewar, emerged near Mumbai and created the Rashtriya Swayamsevak Sangh, or the RSS. Today, the RSS is the umbrella organization of the BJP, the ruling party.

By the 1940s, RSS membership base grew to 600,000 volunteers. Today, it has well over 5 million. Under Modi, Hindu nationalism has been brought to mainstream politics, and Hindu nationalists now hold prominent cabinet- and ministerial-level positions in government.

The RSS was twice banned as a political party. Once was after Mahatma Gandhi was assassinated in 1948 by former member RSS Nathuram Godse. The second time was more recent, following the demolition of Babri mosque – a holy site in the north Indian city of Ayodhya – in 1992. The demolition led to nationwide riots where 1,000 people, mostly Muslims, were killed. Hindu nationalists claim that the site is the birthplace of Lord Rama. In 2019, the Indian Supreme Court allowed a Rama temple to be constructed at the contested site.

After the first ban, the RSS and Mahasabha created their own political party called the Bharatiya Jana Sangh – the predecessor to the current BJP – in 1951. The Jana Sangh ran on a platform of “Indianizing,” or assimilating, all minorities into a unified Hindu nation.

For centuries, Muslims were perceived by many Hindus as another ethnic group or a subcaste within South Asia, not as an external threat that needed to be warded off. But Savarkar did not believe so. He wanted to bring about an internal cohesion among various Hindu groups to protect against any external invasion.

Savarkar’s treatise was the foundation for the 2014 BJP manifesto, which set the party’s agenda to mend the “discarded vision” of a Hindu nation.

Secularism is written in India’s constitution, but the BJP’s reelection in 2019 demonstrates that India may be undergoing a fundamental change and embracing a Hindu identity.

The Rama temple construction is expected to be ready before the next parliamentary election in 2024. The building and celebration of a Hindu temple on the grounds of a destroyed Muslim mosque is, I believe, emblematic of India’s transition.

(Saba Sattar, PhD Student in Statecraft and National Security, The Institute of World Politics. The views expressed in this commentary do not necessarily reflect those of Religion News Service.)