Perhaps it’s just the version of Larry David that Larry David plays on his HBO series, “Curb Your Enthusiasm.”

In the most recent episode, Larry accidentally spills coffee on a passerby’s white robe. It turns out it is a KKK robe, and its owner needs it in order to attend several hate rallies.

Larry agrees it is his responsibility to get the robe cleaned. He takes it to the dry cleaner, who is Jewish. You can imagine the rest. (At least the dry cleaner was not the seductive Hasidic woman of the old “Curb” episode, The Survivor.)

We can debate whether Larry actually had an ethical responsibility to get the robe cleaned. Apparently some of my colleagues have debated that in the Forward.

But then, Larry goes beyond imagined ethical responsibility. He actually befriends the racist miscreant. And, why? Because he seems like a nice guy — for a Nazi, antisemitic bigot.

If this sounds like a certain American president alleging there were “very fine people on both sides” in Charlottesville, well, exactly. That is what it’s saying. It’s saying you can actually befriend someone whose political and racial ideas are so totally beyond the pale.

Let us contrast this with a moment in the life of the real Larry David. This past summer on Martha’s Vineyard, Larry ran into professor Alan Dershowitz. Mind you: The two had been friends. Larry castigated Alan for his ties to the Trump administration.

Larry: “No. No. We really can’t. I saw you. I saw you with your arm around (former Secretary of State Mike) Pompeo! It’s disgusting!”

Contrast this, as well, with how Larry treats Judaism in the same episode.

Susie asks Larry to invite her rabbi, whom she admires, to play golf with him at his club. Larry demurs. He doesn’t want to hang out with the rabbi.

But the golf game ensues. The rabbi makes a little wager. If his golf game is better than Larry’s, then Larry has to attend services at the rabbi’s synagogue. Larry protests, saying it would be excruciatingly boring and distasteful.

Of course, the rabbi wins.

And, of course, Larry must attend services — on Rosh Hashana. This might be one of the worst-directed scenes about synagogue life in the history of television (and there is a lot of competition for that prize). The worshippers are sitting there, very informally clad — nothing like it would be in real life, and nothing like it was in the famous “Curb Your Enthusiasm” episode in which Larry scalps High Holy Day tickets at his synagogue in Brentwood.

Recall how Sarah Silverman recently called attention to how Jews “represent” and are represented?

I would say, therefore, this episode does a remarkably poor job of representing — Jews, Judaism and even the propriety of everyday behavior.

Ah, but this is a Jewish story, and therefore, it needs redemption.

I don’t want to give away the ending, but it might have provided that redemption. Along with a little revenge, thanks to Susie.

Watch it and see for yourself.

But one last thought.

There was a time in American Jewish life when a television episode like this would have caused the phone lines at American Jewish defense organizations, like the Anti-Defamation League, to light up like a defective Christmas tree.

In fact, it wasn’t all that long ago.

Today, we shrug it off — not only because there is so much content to watch (remember the old days of three stations?), but because American Jews are that much more secure.

So, was this most recent episode of “Curb Your Enthusiasm” good for the Jews?

And, that, in and of itself, is good for the Jews. 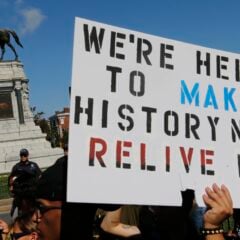 Religion Hub
Conspiracies about a ‘catastrophic takeover’ by Jews have long been an American problem
Follow us on Facebook!
Submit your photos to RNS