Stewart, like many of us in the pro-life movement, wants the court to completely overrule the two cases that primarily govern abortion law in the United States, Roe v. Wade and Planned Parenthood v. Casey. But if their decision in Dobbs fell short of completely overruling those precedents, he wanted to give the justices wiggle room to reject their central holding — that abortion must be legally available as long as prenatal children are not “viable” — able to live outside their mother.

For Stewart, this meant coming up with a different, more restrictive standard for regulations that would restrict legal abortion.

In the early going of the oral arguments, Justice Thomas, sensing a key moment, interrupted Stewart to ask what kind of standard he had in mind. Stewart said: “a clarified version of the undue burden standard untethered from any bright line viability rule.”

But later, when Justice Kagan asked him how the court should think about how a newly clarified undue burden standard would affect different public policies, Stewart ended up reaffirming his primary goal of simply tossing Roe and Casey and letting the states decide completely on their own without any guidance from the Supreme Court.

This kind of confusion has been around since 1992 when the majority in Casey said that restrictions on abortion could be passed only if they did not constitute an “undue burden” — which meant that the law’s “purpose or effect is to place a substantial obstacle in the path of a woman seeking an abortion before the fetus attains viability.”

Pro-choice legal scholars have worried for decades that the inherent slipperiness of this concept could lead some justices to interpret the standard in ways that meant more and more abortion restrictions would be constitutional. And, indeed, the concept of undue burden has changed over time in some of the ways they have feared.

The “clarified” version called for in Stewart’s back-up plan would essentially be made up by the court. One might think that conservative justices would be loath to do this, but questions from Chief Justice Roberts indicated that he may want to uphold the Mississippi law (which is in line with many European-style abortion restrictions) without overturning Roe and Casey completely.

Could the chief convince some others to go with him on a new version of undue burden? He might, especially if some pro-choice justices see it as better than nothing and some pro-life justices are worried about the consequences of a 5-4 decision that seems to hang vulnerable women out to dry. 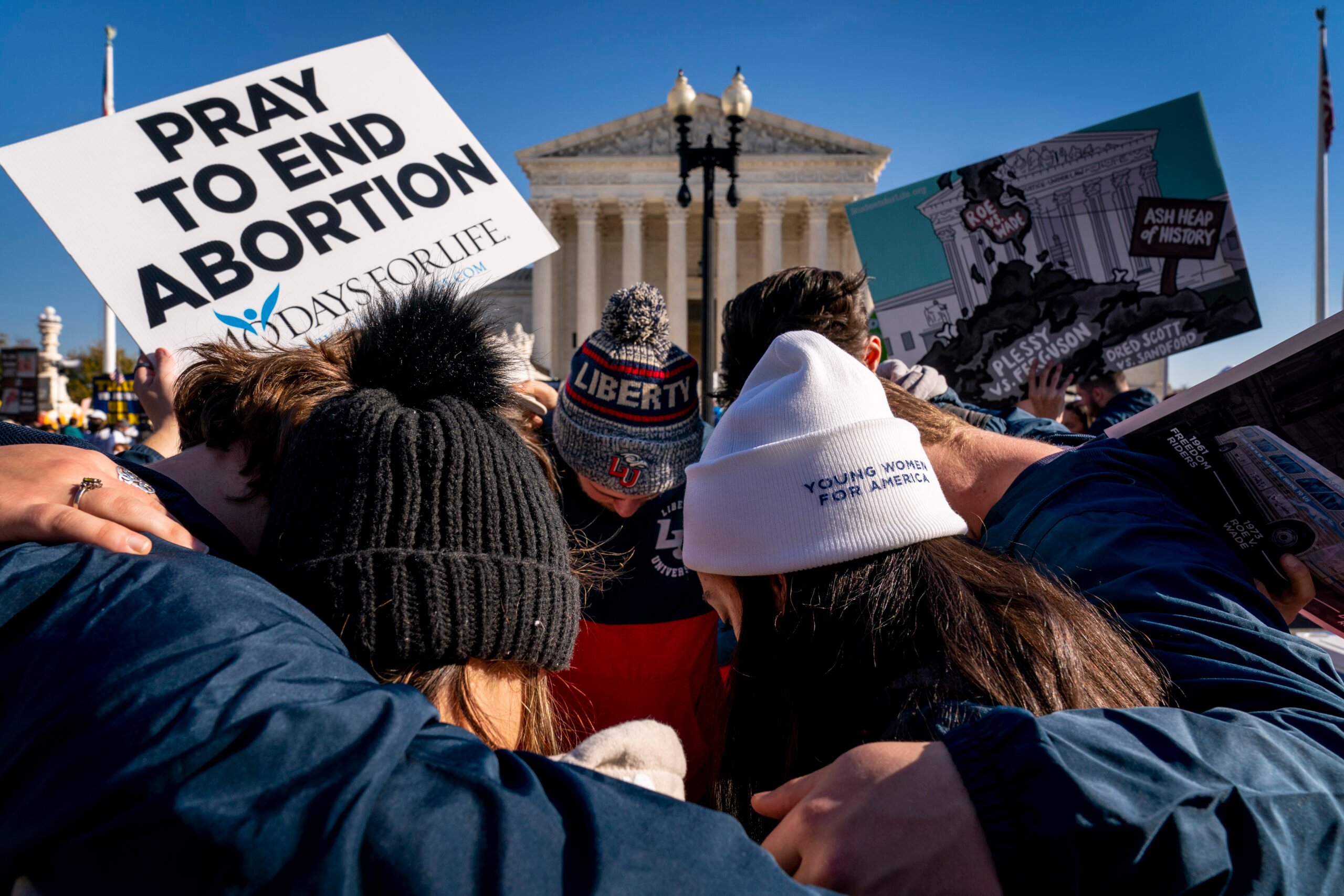 FILE – A group of anti-abortion protesters prays together in front of the U.S. Supreme Court, Dec. 1, 2021, in Washington, as the court hears arguments in a case from Mississippi, where a 2018 law would ban abortions after 15 weeks of pregnancy. (AP Photo/Andrew Harnik, File)

The key to any new undue burden standard is to think carefully about what kinds of abortion restrictions impose what kinds of burdens on women. Some very serious feminist thinkers believe that legalized abortion hurts women and argue that the court should be focused instead on the undue burden created by legal abortion. But let’s put their interesting and important argument aside for the moment and assume instead that restricting legal abortion does put a net burden on women — especially when it comes to their ability to make reproductive decisions that serve their economic, professional and familial interests.

As I am at pains to point out in my 2015 book “Beyond the Abortion Wars,” these kinds of burdens have changed significantly in the United States since the 1992 Casey decision, not least due to the implementation of many different kinds of social programs:

The ACA is particularly important in this regard, not only because it provided a very important expansion of Medicaid health benefits to poor women (and men) and access to graduated support for buying health insurance via private exchanges, but because it also included the following provisions of the Pregnant Woman Support Act:

These provisions by themselves would be more than enough for Roberts and his supporters to rightly argue that a modest 15-week abortion ban should no longer be considered an undue burden.

But what about abortion restrictions before this stage, such as the increasingly popular bills that restrict abortion after the prenatal child’s heartbeat can be detected? Here the court could still send the issue back to state legislatures and lower courts but with the following guidance: The more support women and families have in a particular state, the more abortion restrictions would not be considered undue burdens and thus would be constitutional.

Happily, conservatives like Ross Douthat, Patrick Brown, Karen Swallow Prior and many others have increasingly argued that we must go further in expanding social support for women and families.

Pro-lifers should follow their lead, break with the Republican Party and support many provisions of President Biden’s Build Back Better Act: especially free preschool for all 3- and 4-year-olds, massive support for childcare, extending the American Rescue Plan’s expanded child tax credit, closing the Medicaid Coverage Gap and reducing premiums for those who buy their health care insurance via the ACA exchanges.

RELATED: Build Back Better or quit? Time to choose

Beyond these substantial provisions, pro-lifers should also support more and stiffer penalties for workplace discrimination based on pregnancy and “new mother” status, create new and more robust mechanisms for collecting child support from absent fathers, overhaul the adoption industry and work to lower adoption stigma, and partner with groups focused on reducing intimate partner violence to address abortion coercion by men.

Pro-lifers should support these proposals, first and foremost, because they are what justice requires for women and families. This, after all, is what a “whole life revolution” in favor of both prenatal and post-natal justice requires.

We should also support them because they will continue to lessen the substantial burdens many women will feel if states are rightly given the opportunity to craft and pass new laws in support of prenatal justice. Indeed, doing this may be at the heart of what a post-Roe/Casey pro-life movement will look like.

Signs of the Times
What has the demise of Roe v. Wade cost the Catholic Church?
Follow us on Facebook!
Submit your photos to RNS