(RNS/AP) — When an opening for bishop arose in the Christian Methodist Episcopal Church in 2010, Teresa Jefferson-Snorton looked around to see if any women were offering to be candidates.

She knew that since its founding 140 years earlier by Black Methodists emerging from slavery, the denomination had never elected a woman bishop.

“I was like, oh my goodness, this can’t be,” she recalled. “If no one steps forward, it gives the church a pass.”

Jefferson-Snorton, who had spent decades as a pastor, chaplain and theological educator, undertook several months of intensive prayer before discerning she was “feeling a call to this” from God. Then she put her name forward.

“To an extent, it was a political statement,” said Jefferson-Snorton. 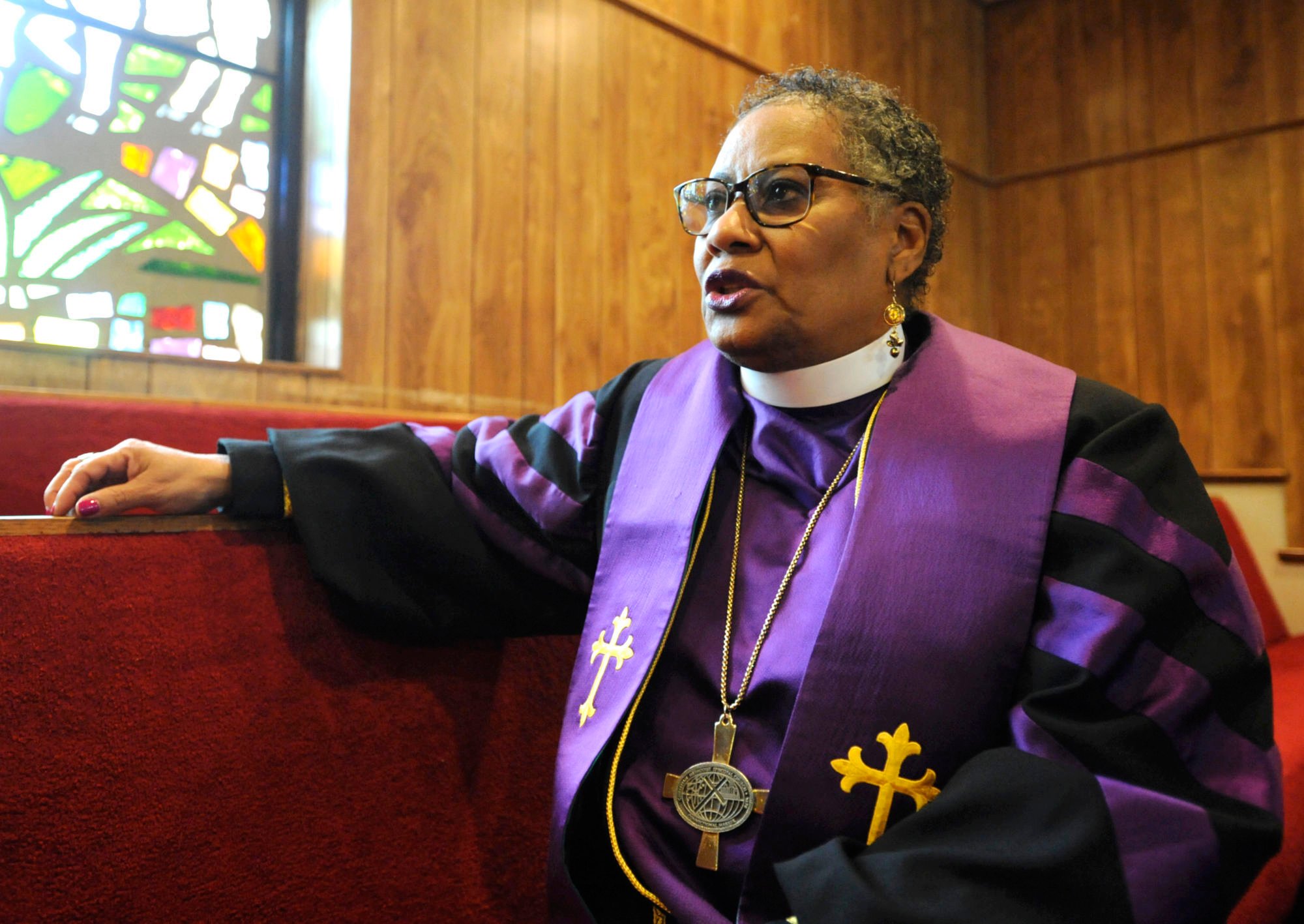 Despite opposition from some who said the denomination wasn’t ready for a woman bishop, she was elected the CME’s 59th bishop, overseeing 217 churches across Alabama and Florida.

Jefferson-Snorton said people there have come to accept her in the role — if awkwardly at times.

Eleven years later, she remains the CME’s only woman bishop, a status made vivid in an official photo of the church’s college of bishops, where she sits among 16 men, all in purple and white vestments.

Most major Black Christian denominations in the U.S. have no doctrinal bar to ordained women leaders in the way that Catholicism and some other denominations do, and women have preached and been ordained in historically Black churches since at least the 19th century.

Yet denominational leadership remained all-male until the 21st century, and women are still the exception in the top rungs. 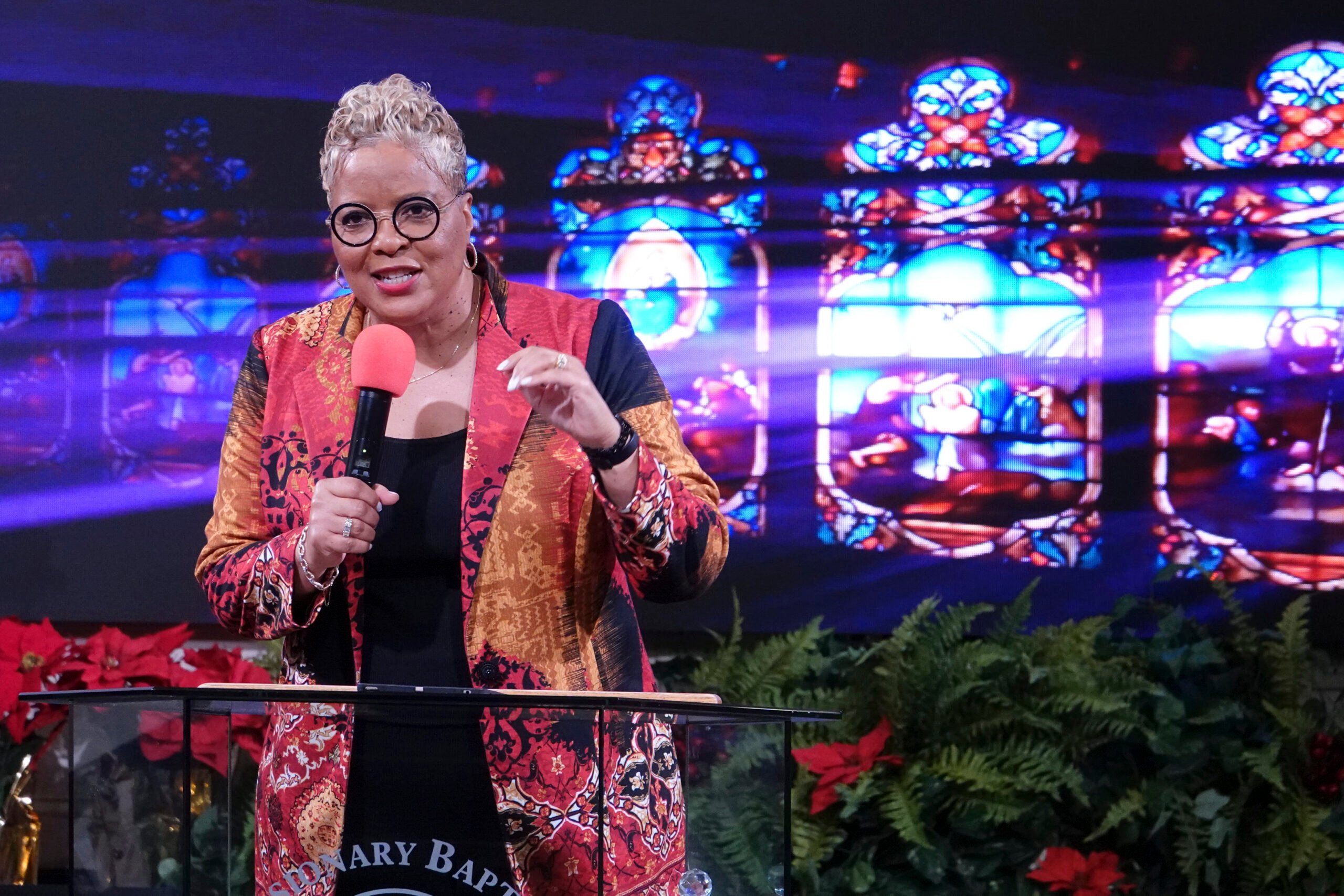 “Whenever a woman is placed in a role that is traditionally male, there’s always some negativity that surrounds it,” Stewart said, but in her first 90 days as president, she has received congratulatory calls from some male denominational leaders and support from her male predecessors, without encountering “any major resistance.”

“There’s a shifting taking place,” Stewart said, noting that more women have been promoted to lead important departments in the church.

“We know that it’s long overdue,” added Stewart, who is the senior pastor of Christ Missionary Baptist Church in Memphis, Tennessee. “But we give those organizations that are making the effort credit, taking the initiative and giving women that opportunity.” 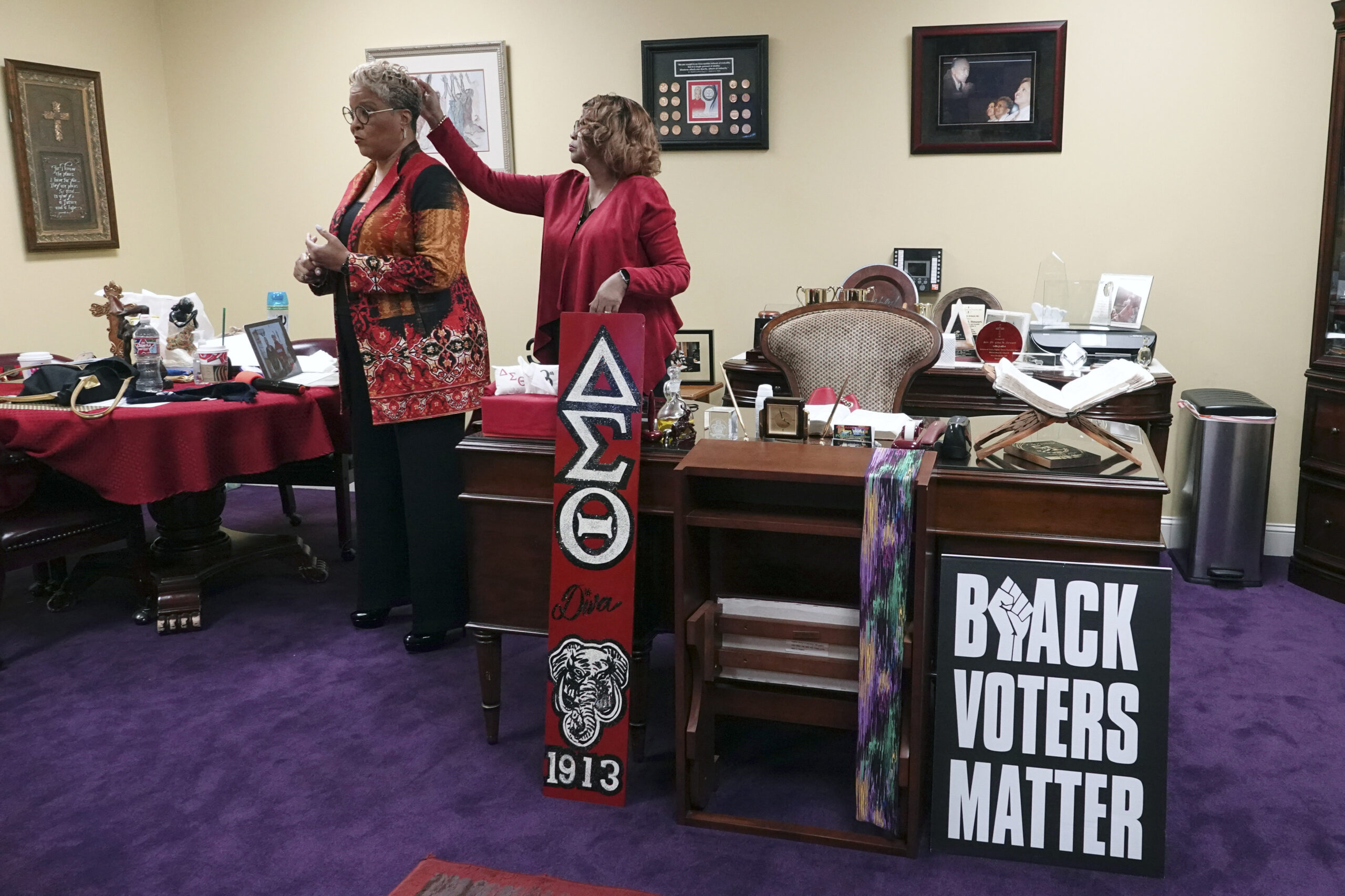 Religious organizations still need to do more to provide women chances for leadership development, said the Rev. Maisha Handy, associate professor of religion and education at the Interdenominational Theological Center, a consortium of historically African American seminaries in Atlanta.

“We’ve certainly made strides around that in recent years, in recent decades, but we still have a long way to go,” said Handy, who is also executive director of the Center for Black Women’s Justice at ITC.

“It’s not just about ordination. It’s about placement,” said Handy.

When Black denominations got their start in the late 18th and early 19th centuries, according to Handy, their biblical interpretations were affected by the cultural attitudes around them. “When you think about the kind of patriarchy and misogyny that is intrinsic to American history and culture, it makes sense that it was reflected also in those denominations,” she said.

To be sure, women have long exercised authority in non-ordained roles, outnumbering men in local church membership and also leading their own organizations within denominations.

But from the first, women had limited access to the pulpit, though some challenged those barriers.

“If the man may preach, because the savior died for him, why not the woman?” Jarena Lee, the first woman lay preacher in the African Methodist Episcopal Church, asked in the early 19th century. 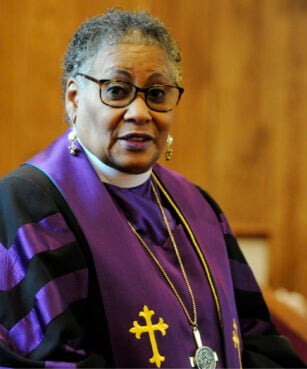 A sister denomination, the African Methodist Episcopal Zion Church, ordained Mary Small, its first woman minister, in 1898. By the mid-20th century, the CME and AME churches were ordaining women as well. Records are less precise among the more decentralized Baptists, but women’s ordination was long the exception among them.

In 2000, Vashti Murphy McKenzie was elected the first woman bishop in the AME Church. McKenzie, now retired, was later joined by more women bishops, though men still comprise most of the AME episcopacy. The AME Zion Church followed, electing Mildred “Bonnie” Hines bishop in 2008, as did the CME with Jefferson-Snorton in 2010.

Jefferson-Snorton, who in October was elected chair of the governing board of the National Council of Churches, said she is still sometimes questioned about biblical passages that are cited to justify giving men sole power to preach or lead. She cites other passages, such as one declaring that in Christ there is neither male nor female.

“I often start with the story of Resurrection morning,” when Jesus’ female followers were told to “go and proclaim” he had risen from the dead, she added.

“If Jesus had not intended for women to be bearers of good news, that would never have happened,” said Jefferson-Snorton.

But to those who are “more hostile” in questioning women’s ministry, “I often say to them, ‘God called me to this ministry, so if you have a problem with it, you need to talk to God, because I did not call myself,’” she said.

In the Church of God in Christ, a historically Black Pentecostal denomination, women have made their influence felt in other ways. Traditionally only men have been recognized as ordained ministers or bishops, while women have led its Women’s Department, which oversees auxiliaries. COGIC officials didn’t respond to questions about women’s roles in the denomination. 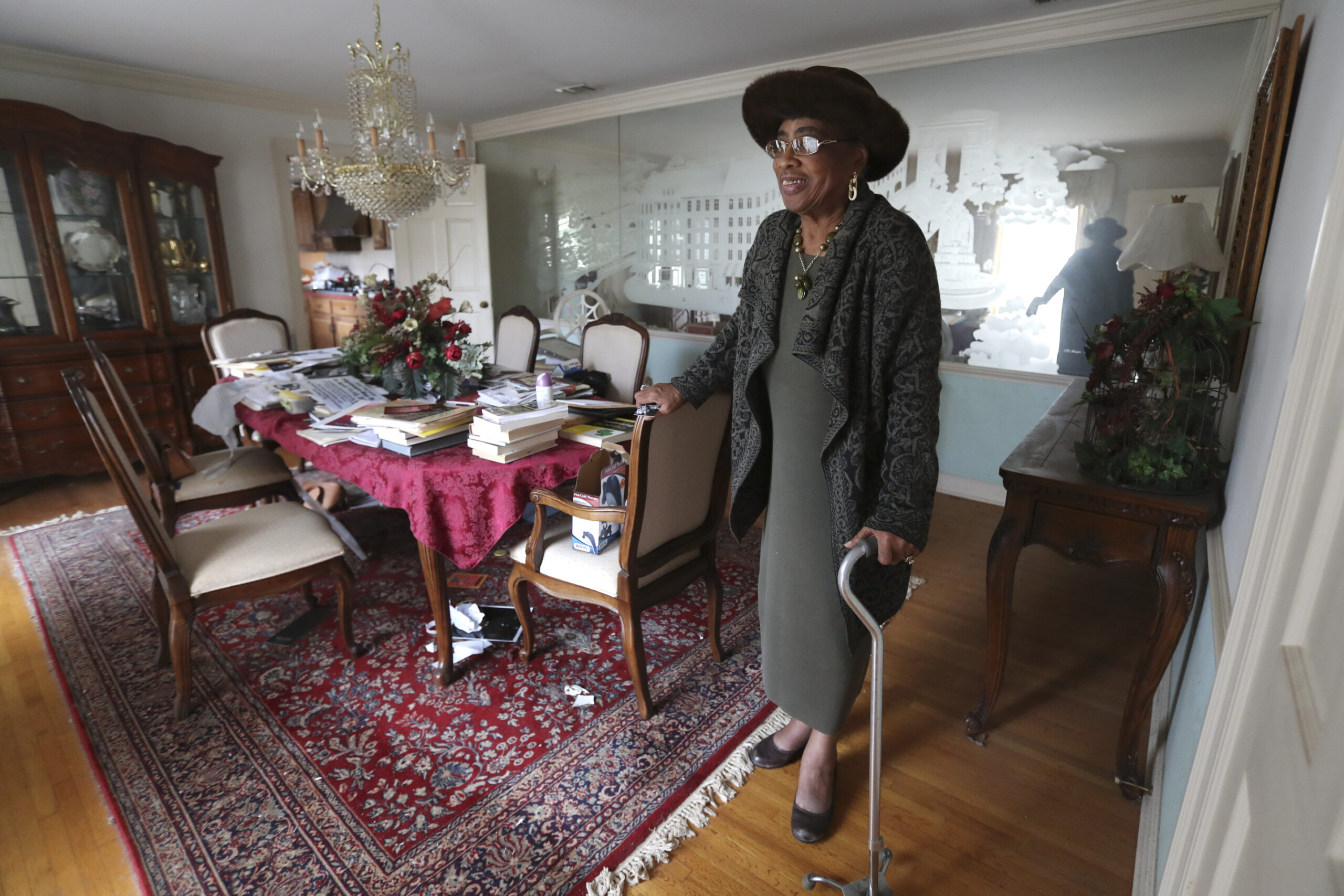 Mother Mary Patterson, poses at her dining room table in her Memphis, Tenn., home Dec. 1, 2021. The material on the table was used by Patterson in her recent campaign to post historical markers about Church of God in Christ leaders. In the Church of God in Christ, where only men have traditionally been recognized as ordained ministers or as bishops, women like Patterson have nevertheless played key roles in its Women’s Department — which oversees auxiliaries — and in other ways. (AP Photo/Karen Pulfer Focht)

But after the death of her husband, COGIC’s first elected presiding bishop, Mother Mary P. Patterson, a retired real estate agent who headed her own travel agency, founded the Pentecostal Heritage Connection, dedicated to planting historical markers honoring COGIC leaders across the South. In November, a ceremony unveiling the final marker, an 8-foot aluminum sign on a corner in Little Rock, Arkansas, was attended by regional religious leaders, a representative of the governor and scholars who traveled to the state for the occasion.

Sherry Sherrod DuPree, a Florida historian and former president of the Society for Pentecostal Studies, said Patterson’s effort is an example of how women lead in a denomination known for its patriarchal hierarchy.

“She is a quiet praying lady who ‘stays in her lane’ but is active in getting jobs done without fanfare, one of the skills of COGIC women,” said DuPree.

Patterson said, “it shows other young women that you don’t have to be behind the pulpit in order to do a work for the Lord.”