(RNS) — It’s that time of year, for many of us, for shiny packages tied up with a bow. But don’t expect the majority of Gen Z, which likes its faith “unbundled,” to accept the traditional holiday packages of rituals, practices, and beliefs that churches offer.

One of the most important findings from our new report, “The State of Religion & Young People 2021,” is that young people ages 13 to 25 embrace a faith that combines elements from a variety of religious and non-religious sources, rather than receiving all these things from a single, intact system or tradition.

Though majorities of Gen Z say they’re religious (71%) or spiritual (78%), less than a quarter (24%) counted attending a religious service among “the most meaningful things I do” during the winter holidays (e.g., Christmas, Thanksgiving, Hanukkah, Diwali, etc.).

Whether it’s through tarot cards, acts of protest, or being in nature, Gen Z instead expresses its spirituality in nontraditional ways, outside of traditional religious institutions.

Both of these young people might also engage with the political theory of Karl Marx or Ayn Rand, the poetry of Rumi or St. Francis of Assisi, or the nonviolent philosophy of Martin Luther King Jr. or Gandhi as they examine life’s deepest questions. 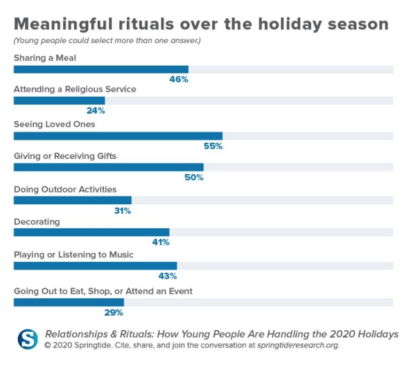 It’s easy to simply categorize Gen Z as less religious than previous generations, but our findings show that Gen Z is simply different when it comes to religion: They don’t conform to traditional definitions of what it has meant to be a Catholic, Hindu, Baptist, Sikh or even atheist.

Most nonetheless feel a hunger for something spiritual in their lives and look for ways to mark the spiritual significance of Christmas, Hanukkah, Kwanzaa, or Rohatsu, even if they are uneasy with traditional, institutional ways of doing so.

Even in this rapidly changing context, their elders can have influence in their lives this holiday season. Undoubtedly, droves will attend religious services whether they want to or not, but it’s unlikely that faith leaders will influence young people in these settings.

Rather, the timeless building blocks of relationship still pertain: reaching out, expressing curiosity, listening authentically and pairing expertise with genuine care. We call this approach “relational authority,” a hallmark of last year’s “State of Religion & Young People 2020.” Young people are far more likely to be influenced by adults who demonstrate care about their lives than those — even experienced faith leaders — who focus on offering traditional rituals and seasonal cheer.

Here are three suggestions for faith leaders and others who want to make the most of their time with young people this holiday season:

Don’t shrink back from talking about tough topics.

A major theme from “The State of Religion & Young People 2021″ is the uncertainty that marks the lives of young people today. This past year has only amplified that sense. Yet, that nearly half (47%) of young people told us “I don’t think religion, faith, or religious leaders will care about the things I want to talk about or bring up during times of uncertainty” proves otherwise.

Affirm as much as possible Gen Z’s approach to faith that includes making space for variation and personalization.

Nearly 6 in 10 young people (58%) agree with the statement “I do not like to be told answers about faith and religion. I’d rather discover my own answers,” while 53% agree that “religion, faith, or religious leaders will try to give me answers, but I am looking for something else.”

Rather than feeling threatened by the first proposition in each of these sentences, celebrate the second: Young people are seeking to discover answers about faith and religion. They just don’t feel comfortable adopting a rigid system of beliefs and behaviors wholesale. Encourage their imagination and curiosity.

Consider how to make your community safe for young people to be their full selves.

You might find it surprising that someone would feel unsafe in your synagogue, church or mosque, but consider some of the dominant identities, perspectives and political orientations that prevail there. Young people tell us frequently that they won’t attend places of worship where their friends of marginalized identities wouldn’t be accepted, even if those friends aren’t present. Be bold in sending the message that young people are welcome in your community just as they are.

But know that this is just the first step. Trusting that this is true is something that will need to be built slowly over time, through relationship.

(Josh Packard (@drjoshpackard) is executive director of Springtide Research Institute and author of “Church Refugees.” The views expressed in this commentary do not necessarily reflect those of Religion News Service.)