These are the words of the liberal intellectual Irving Howe to his conservative counterpart, Ruth Wisse, one of the pre-eminent scholars of Yiddish literature, professor at Harvard University and one of world Jewry’s great public intellectuals.

“Try to understand that I genuinely did not wish to get into a fight with you.”

Neither did I – though I once did.

Ruth and I were at a conference, and we found ourselves involved in a small but heated exchange about a particular presidential candidate. She supported him; I did not.

As far as I can tell, the ensuing years have done little to change her views — as they have failed to change mine.

I have long been a fan of Ruth Wisse’s immense literary output; the clarity with which she states her opinions; her opening of Yiddish literature to me and to countless others (novelist Dara Horn is one of her students).

That is why I found her recently published memoir, Free As A Jew: A Personal Memoir of National Self-Liberation, to be such a delight.

Ruth Wisse tells her story — the story of a young woman, born into a family of refugees; she  was born in Czernowitz/Chernivtsi, in western Ukraine.

She grew up in the Old World Jewish atmosphere of Montreal — a city with a thickness of Jewish culture that is only rivaled by New York. We meet Montreal’s Jewish luminaries — the poet A.M. Klein; the poet-songwriter Leonard Cohen; the novelist Mordecai Richler, best known for “The Apprenticeship of Duddy Kravitz”; and the distiller-philanthropist, Samuel Bronfman.

Montreal was also where she first encountered the late theologian and thought leader, Rabbi David Hartman.

When she first heard Rabbi Hartman teach, she was “like one awakened from sleep.” Ruth made me smile; so was I, and his many other students, as well. I smiled, as well, at her borrowing of that biblical phrase; it is one of the things that identifies her as a true Jewish literary heroine.

This is how the late singer-songwriter, Debbie Friedman, rendered it: “Laugh at all my dreams my dearest; laugh and I repeat anew; that I still believe in man [sic]; and I still believe in you….my soul has not been sold to the golden calf of scorn…”

When they were considering songs to be the national anthem of the state of Israel, apparently “Tzach’ki” was the runner up to “Hatikvah.” Who knew? On the one hand, a song about a hope; on the other, a song about the rejection of cynical laughter.

I am grateful for Ruth’s juicy bit of literary gossip. That alone was worth at least a half hour of pondering and meditation.

Her memoir is a “who’s who” of the Jewish literary and cultural world. Over the years, she has known the Yiddish writer, Isaac Bashevis Singer, whom she encountered at a pidyon ha-ben (redemption of the first born) ceremony; the modern Orthodox thinker, Rabbi Irving (Yitz) Greenberg; the literary figure, Hillel Halkin, the author Saul Bellow; the former Commentary editor Norman Podhoretz (who endorsed the book), and her fellow literary and social critic — and ideological opponent, Irving Howe.

There you have the inescapable part of Ruth Wisse’s identity. She is a political, social, and cultural conservative. As a “brand plucked from the fire” (the prophet Zechariah’s phrase), her faith, and the faith of other children of refugees/survivors, roots itself in a stubborn refusal to surrender to illusions. Her credo re-states the rabbinic quip: “Those who are kind to the cruel will wind up being cruel to the kind.”

She shows no kindness towards Soviet Communism and its heirs. Ruth mentions how the former Soviet Union recruited American Jews who were members of the Communist party. Alas, the singer and Communist sympathizer, Paul Robeson, saw signs of Soviet torture, and that evidence failed to shake his support for the regime; he was not alone in his clinging to the dream. Others were more perceptive, and bailed on Communism.

Neither does she show kindness to the anti-Zionists of the New Left, whose anti-Zionism and even antisemitism she traces to Karl Marx. She has little patience with those Jews who are hyper-critical of Israel’s policies, like her ideological “frenemy” Irving Howe: “Those….who toyed with Israel’s security from abroad struck me more like spectators at Roman gladiatorial games turning thumbs down on their own brothers.”

I understand the intellectual vigor that is at the heart of her conservatism, though i do not share it.

But, one piece of that conservativism frustrated me. That is her rejection of women rabbis — at least, Conservative women rabbis. She accuses the Jewish Theological Seminary of simply bowing to feminist pressure:

Even someone as deficient in Talmudic expertise as I could see that the movement’s avowedly cautious and “conservative” approach to innovation had been unceremoniously sacrificed to modern feminist pressure. Had JTS’s rabbinic authorities really framed their arguments for this decision in conformity with the movement’s own guidelines? Had a cohort of female Talmudists risen to rival or surpass their teachers in mastery of sources? Had growing synagogue membership and intensified devotion on the part of conservative women required such a tradition-defying innovation?

To which I would say, as someone outside the Conservative movement: Yes, a non-Orthodox Judaism that chooses to respond, albeit cautiously at times, to the waves of history and modernity did have to act the way it did.

So, how do you handle the work of someone whose politics sometimes enrages and/or frustrates you?

You sift through what you don’t like, and you look for the things that you do like.

For those of us whose education in modern Yiddish culture and literature has been deficient, and/or limited to folksy vulgarities, the book fills in some very precious and sweet blank pages.

Ruth notes that, on his deathbed, her father asked:  “Vos vet zayn mit di goldene keyt? What will happen to ‘The Golden Chain?’”

He was referring to “The Golden Chain,” a literary quarterly founded in Tel Aviv by the Yiddish poet, Avrom Sutskever in 1949.

“The Golden Chain” was also the title of a drama by I. L. Peretz (ancestor of former New Republic editor and publisher Martin Peretz, who endowed Ruth’s chair at Harvard). The drama portrayed four generations of a rabbinic dynasty, each representing a different approach to leading the Jewish people in modern times.

Was Father asking about the fate of the journal, about the corresponding fate of the Jewish people, or about our own family?…I should have stroked the hand that wasn’t attached to the intravenous tube and reassured him that he could count on his children and grandchildren to preserve and strengthen the golden chain.

Ruth Wisse and I will fervently agree: whatever we do, we have to preserve and strengthen the golden chain. 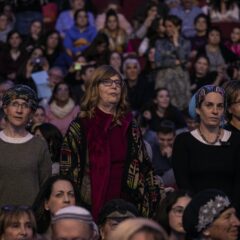 Opinion
Jews need allies. Here’s how to be one.