I saw it again just days ago in Tel Aviv.

The arrival of Jewish immigrants to Israel is an extraordinary sight to behold under any circumstance. Routinely, they descend the steps of the airplane, bend to their knees and kiss the ground in gratitude to God.

Whether young or old, they arrive these days during a rise in antisemitism around the world. Because the State of Israel allows Jews anywhere in the world to immigrate to the country, many from around the globe have found a refuge there.

I’ve been to Israel a number of times but have been unable to visit for the past two years due to the COVID-19 pandemic. Now that the country has reopened to the world, I returned last week and met diplomats from Islamic-majority countries, representatives in various ministries of the Israeli government, religious leaders of all types, professors from the University of Haifa, technology entrepreneurs, archeologists and even Israel’s famed Muslim parliamentarian-turned-kingmaker, Mansour Abbas.

I also enjoyed a Shabbat dinner with a mentor and friend and made near-daily trips to meaningful places like the City of David and the Western Wall.

Yet, long after those memories have faded, the sight of Jewish immigrants from Ukraine arriving at Ben Gurion Airport Sunday morning will remain in my memory.

I was to greet a flight sponsored by the International Fellowship of Christians and Jews, a charity my company works with. Aboard the flight were 77 Ukrainian Jews leaving their home in Europe to start a new life in Israel. As they arrived, the drums of war were already beating loudly back in Ukraine, home to one of the largest Jewish populations in the world outside Israel.

I watched Yael Eckstein, who runs the fellowship, help an elderly woman named Koronina Nelia down the stairs. Nelia’s mother was pregnant when World War II began, and she never met her father, who was killed in that war.

“I am so relieved to be in Israel,” Nelia said. “I am not a healthy person, but since arrival to Israel, I feel cured.”

A young couple, Evgeni and Jana, carried their exhausted little girl down the stairs, relieved to have arrived. Later, Jana told the Times of Israel that everyone back home had been worried about the likelihood of a war with Russia. 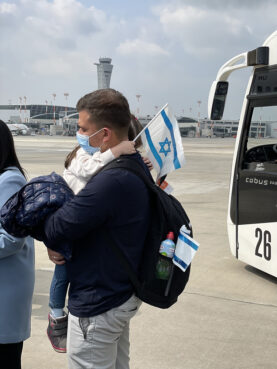 “Until the last moment,” she said, “we were worried that the flight would be canceled due to the situation.”

Not everyone was as fortunate as Nelia and Evgeni and Jana. Some of the Ukrainians on that flight’s manifesto were unable to make the trip. They tested positive for COVID-19 on the way to the aircraft and had to delay their immigration.

The image of Evgeni holding his daughter — her head resting on his shoulder — brought the reality of the war in Ukraine home to me. My wife and I have a daughter not much older than Evgeni and Jana’s daughter, and I wondered what it would be like to have my daughter’s head resting on my shoulder after having fled a war zone.

Still, we aren’t beholden to our political leadership in order to save lives. Democracies have given us the world’s greatest charities, from Israel to America. Now, they need our help to save more lives.

Sometimes, our best defiance of those who want to wreck our world is to preserve the lives they want to destroy. As the Jewish sage says, “Whoever saves a single life is considered by Scripture to have saved the whole world.”

RELATED: Next year in Kyiv?

(The Rev. Johnnie Moore is the president of The Congress of Christian Leaders, founder of The KAIROS Company and a recipient of the Simon Wiesenthal Center’s prestigious “medal of valor.” He was twice appointed by the president of the United States to the U.S. Commission for International Religious Freedom. The views expressed in this commentary do not necessarily reflect those of Religion News Service.)