(RNS) — The Rev. Franklin Graham said his Christian humanitarian relief organization was sending disaster response teams to Poland, Romania and Moldova to assess how it can meet the needs of Ukrainians fleeing their country.

Graham said at least 24 Samaritan’s Purse personnel will be on the ground in those countries bordering Ukraine this weekend.

“First of all we’re concerned for the people,” said Graham, president and CEO of Samaritan’s Purse in a phone interview with RNS Friday (Feb. 25). “I can’t imagine the fear these families are going through.”

The Russian assault on Ukraine is leading to a massive exodus of people fleeing war.

Axios reported that more than 50,000 Ukrainians have fled their country in the past 48 hours. (Ukraine is not allowing men of military age, 18 to 60 years, to cross the border, so the majority of Ukrainians escaping are women and children.) 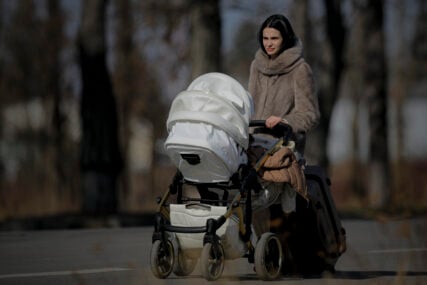 A woman pushes a baby stroller after crossing the border from Ukraine at the Romanian-Ukrainian border, in Siret, Romania, Friday, Feb. 25, 2022. Thousands of Ukrainians are fleeing from war by crossing their borders to the west in search of safety.  (AP Photo/Andreea Alexandru)

Graham noted that these Central European countries aren’t set up to accommodate a large influx of refugees and will need infrastructure to support them. He said Samaritan’s Purse can help with food, clothing, housing and other needs and would work with officials in those countries to best assist the displaced.

Samaritan’s Purse is also ready to send an emergency field hospital and will have one ready to ship from Greensboro, North Carolina, if needed. He said the advanced response team now arriving in Europe will include medical professionals.

Graham was widely criticized last week for tweeting, “Pray for President Putin.” A conservative and a supporter of former President Trump, Graham met with President Vladimir Putin in 2015 and has praised the Russian president for “protecting Russian young people against homosexual propaganda.”

Graham has also held multiple meetings with Russian church and government officials since then.

But Graham made clear Friday he does not support Putin’s invasion into Ukraine. 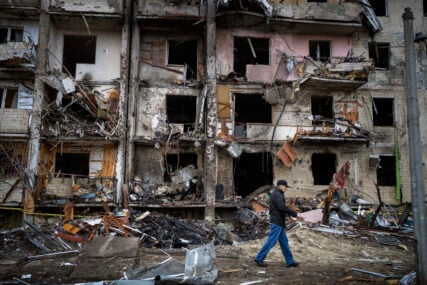 A man walks past a building damaged following a rocket attack in the city of Kyiv, Ukraine, Friday, Feb. 25, 2022. (AP Photo/Emilio Morenatti)

Graham reiterated that praying for world leaders is something Christians do and that in this particular instance he was praying that “God would work in his heart.”

“We want to try to prevent conflict and do all we can. Asking for prayer for a person isn’t supporting him. It’s asking God’s wisdom and favor to give direction.”

For now, Graham said he was staying put in the U.S., though he might also send his son, Edward Graham, to Central Europe to work alongside the disaster response teams.

“If this drags out for another week or two or three, the refugees could be in the millions,” Graham said. “They’re going to need lots of help.”

News
Faith leaders call for Putin to extend Christmas truce into a permanent cease-fire
Follow us on Facebook!
Submit your photos to RNS