LENOIR, N.C. (RNS) — On a cold, gray January morning, the field hospital Samaritan’s Purse erected on the asphalt parking lot in the rear of the city’s hospital was ready to do battle with COVID-19.

In addition to 30 hospital beds set up in four heated tents, the mobile medical unit outside Caldwell UNC Health Care was equipped with a pharmacy tent, a medical supply tent, a PPE “donning” area, a PPE “doffing” area and a trailer for showering.

Outside the tents, workers attached bright magenta tape to the ground around the asphalt lot to mark off the areas where personal protective equipment — gowns, masks, gloves, face shields and bouffant surgical caps — were required, the so-called “hot zone.”

By now, Samaritan’s Purse has it down. Nearly a year into a raging pandemic that has killed nearly 2 million people worldwide, the evangelical humanitarian relief organization has trained healthcare workers or treated COVID-19 patients in 30 countries around the world — including erecting four field hospitals.

The new unit, in the foothills of the Blue Ridge Mountains, 75 miles north of Charlotte, is among the smallest. It does not have an ICU equipped with ventilators like previous field hospitals in Cremona, Italy, and New York City. 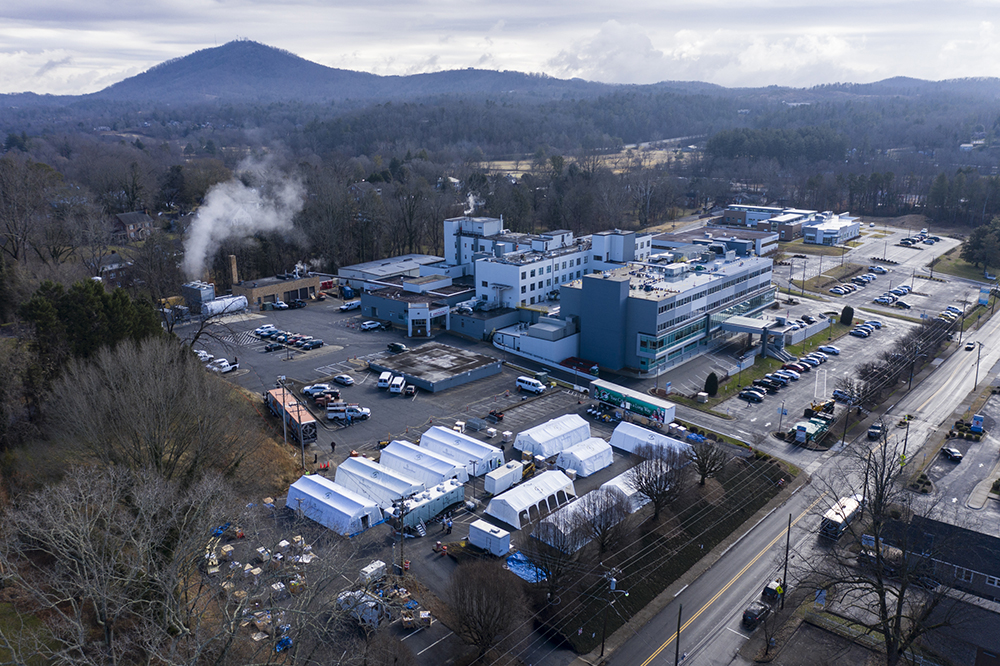 But it’s just as needed. North Carolina’s case count is breaking records each day. The state is seeing, on average, 100 deaths a day, bringing the total since the pandemic began to 7,567, according to the state Department of Health and Human Services. The Lenoir field hospital will serve patients from five regional hospitals that are nearly full or have reached capacity. Hospital administrators said in the past week alone, hospitalizations rose by 20%. Statewide, nearly 3,800 are hospitalized.

Late Thursday afternoon (Jan. 7), the field hospital admitted its first patient, a 58-year-old man. By Monday, it had treated 23 patients and discharged four.

This latest field hospital is close to home. Samaritan’s Purse, founded and led by the Rev. Franklin Graham, is based in Boone, just 30 miles north. As Edward Graham, one of Franklin Graham’s four children, told those assembled Thursday for a short opening ceremony, the organization wants to share its resources.

“I believe here at Samaritan’s Purse we’ve been entrusted with talent,” Edward Graham said. “God expects us to go out and use that.”

Samaritan’s Purse field hospitals have been much in demand. The organization has just agreed to open another, larger 50-bed facility on the grounds of Antelope Valley Hospital in Lancaster, California. On Monday, a cargo plane airlifted components of the mobile field hospital to Los Angeles.

Some 20 to 25 health care workers — doctors, nurses, paramedics — will work at the Lenoir site, most of them contract workers who have committed to a two- or three-week rotation, which they described as part of their service to God. (The medical team receives a per diem stipend.) Edward Graham, the son of the Rev. Franklin Graham and an employee of Samaritan’s Purse, speaks at the opening reception for the emergency field hospital, Thursday, Jan. 7, 2021, in Lenoir, North Carolina. RNS photo by Yonat Shimron

Despite a storm of criticism leveled at Samaritan’s Purse for requiring contracted workers to sign a statement of commitment to traditional heterosexual marriage, the organization’s health care team said they were ready to serve all-comers — including non-Christians and LGBTQ people.

“We’re going to treat every patient exactly the same,” said Erin Holzhauer, medical director for the Lenoir field hospital. “We will not deny anyone care. We’re medical professionals. That’s normal for us.”

Holzhauer, a nurse who was stationed at a Samaritan’s Purse trauma unit in Iraq a few years ago, said she treated Sunni militants from the Islamic State group the same way she has all her patients.

Nurses at the field hospital do pray with patients who want it. But they said they will seek out alternative chaplains for patients who are not Christians. (They’ll also coordinate kosher or halal meals for Jews or Muslims.) 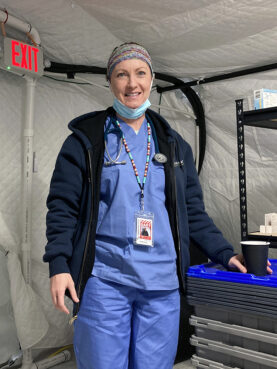 Shelly Kelly, a nurse practitioner from Tulsa, Oklahoma, will serve at the Lenoir field hospital for three weeks. RNS photo by Yonat Shimron

“We ask, ‘Can we pray with you?’” said Shelly Kelly, a 49-year-old nurse practitioner from Tulsa, Okla., who is working a three-week rotation in North Carolina. “If they say no, we don’t pray with them. We’re very respectful of their faith.”

Laura Easton, the Caldwell UNC Health Care president and CEO, said as hospital beds began to fill up in mid-December, she and other regional hospitals reached out to Samaritan’s Purse. The organization is well-known in the area, and some of its employees live in town.

Easton said administrators at the hospital system also called the CEO of Mt. Sinai Hospital in New York City, which partnered with Samaritan’s Purse last spring, to ask about its experience with the charity. What they heard reassured them of the organization’s professionalism.

“They’re highly competent and compassionate caregivers,” Easton said. “All my clinical staff — my doctors, my nurses, all the folks on the front line of our organization — feel nothing but gratitude and appreciation for the help they bring to patients.”

While some patients are initially wary of receiving care in a field hospital, rather than a steel and concrete building, Samaritan’s Purse nurses said most of those concerns are quickly allayed once they see how much attention each patient receives.

“They’re quite spoiled,” Kelly said. “They get whatever they want, whenever they want it. They have a nurse on hand almost immediately because the beds are so close together in the ward.”

“We nurse the family as much as the patient,” said Kelly. “It’s every nurse’s job to keep in touch with the family and keep them in a realistic mindset. We don’t just paint rainbows and unicorns for the family. We’re very honest with them.” 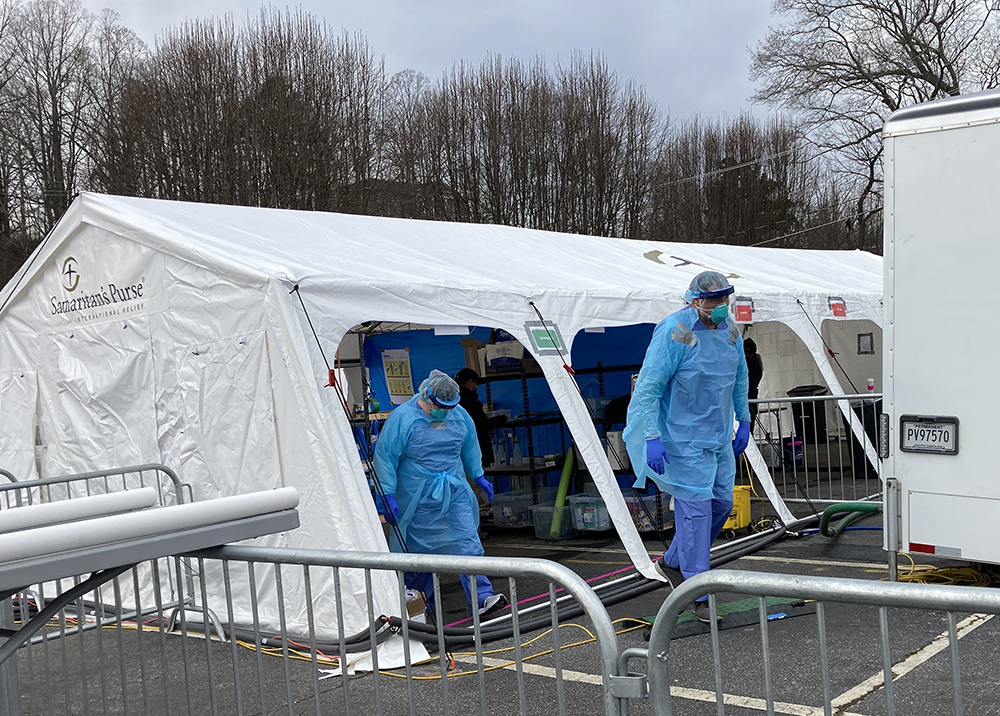 “If the current projections for a continued climb in the number of hospitalizations occurs, we will be able to meet that need,” said Easton.

Samaritan’s Purse plans to stay in Lenoir for as long as needed, though typically its field hospitals remain in one area for four to six weeks.

Kelly, who works at an urgent care clinic in Tulsa most of the year, said she loves nursing. But working for Samaritan’s Purse was more personally rewarding.

“It’s not just about the work we do, it’s about how we develop as individuals through our service and how we experience the love of Jesus ourselves so we can pass it on to our patients,” she said. “It’s very gratifying.”