MADISON, Wis. (RNS) — When she first became pastor of Lakeview Moravian Community, the Rev. Staci Marrese-Wheeler got a bit of advice from the church’s former pastor.

“Get to know your neighbors,” she recalled him saying.

She took the advice to heart, for both pragmatic and spiritual reasons. As a small congregation, Lakeview needed to work with other churches to serve their community. And working together sent a message that God was bigger than a single denomination.

That approach to ministry led Lakeview to partner with Zion Faith Community, a nearby Lutheran congregation, on some ministry projects and then later to create a new congregation called Common Grace, where the two congregations became one.

While each church maintains its own legal status and denominational ties, they worship together and operate as one congregation.

“We really felt strongly that our community needs to see churches working together,” said Marrese-Wheeler.

That belief in working together led Marrese-Wheeler and the Rev. Pat Siegler, her co-pastor at Common Grace, to join the first cohort of Awaken Dane, which hopes to create “a movement of churches awakening to God’s call, forming life-giving friendships and partnerships, and growing in love for their home communities” in Dane County, home to Madison, the state’s capital.

Funded by a grant from the Lilly Endowment, Awaken Dane brings together mainline, evangelical and Black congregations in the city — a rare feat in a time when churches remain divided along denominational and political lines in much of the country. Pastors of those churches spend two years together, building friendships and learning how to help their congregations engage in ministry outside the walls of the church.

RELATED: Why the minichurch is the latest trend in American religion

The idea is to “tell a better story,” said Jon Anderson, executive director of the Madison-based Collaboration Project, which has partnered with the Wisconsin Council of Churches, a campus ministry called Upper House and the University of Dubuque Theological Seminary to lead Awaken Dane.

Anderson, a pastor and community leader who settled in Madison after first moving there as a college student at the University of Wisconsin, spent about 20 years on staff at two of the largest churches in the county, working mostly on community development. 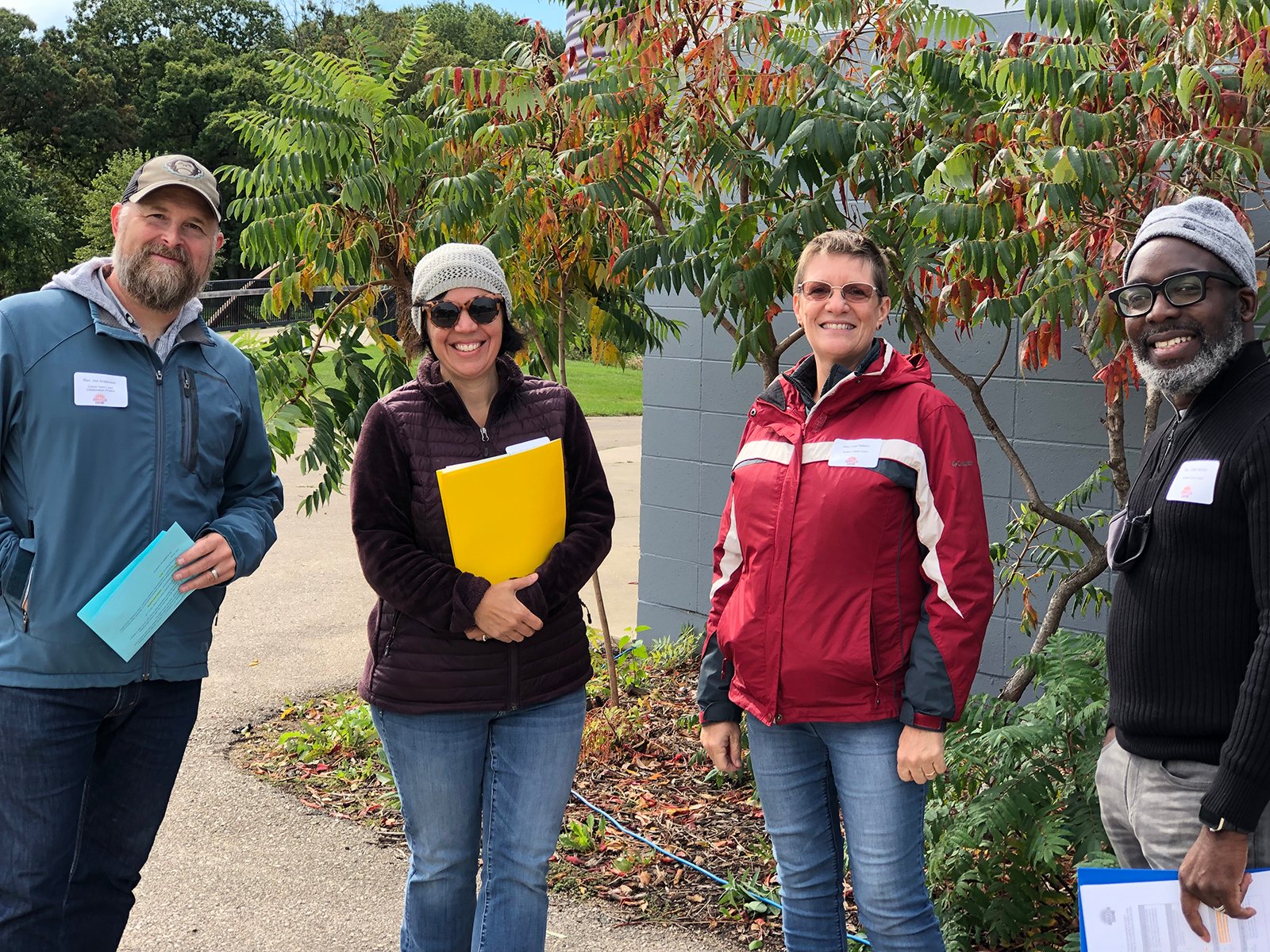 The goal of Awaken Dane, he said, is to find “common ground for the common good.”

“There is a growing disinterest in denominational divides, with people saying, ‘Can the church just be better?’” he said. “Can they tell a different story than what we’re seeing in the broader culture?”

Anderson has long been interested in helping churches find better ways to help the broader community thrive. For about a decade, he led a summer service program that brought young people to Madison to volunteer at local nonprofits. As part of that work, he said, Anderson built relationships with about 100 different nonprofits in the community and helped connect those nonprofits — who needed volunteers and resources — with churches that wanted to help the community but weren’t always sure how to do it.

That kind of collaboration, he said, often starts with relationships between leaders. And he came to realize that partnering on projects is a better way to build close ties among churches than making statements about unity. He hopes that leaders of the nine congregations in the first cohort of Awaken Dane will build close ties during their two years together — and that those relationships will lead to more collaboration between churches.

Awaken Dane is also informed by the work of Dubuque seminary professor Christopher James, who has studied churches in “post-Christian” settings. He also studies what he calls the “ecclesial ecology” — the relationships between clergy and congregations in a community.

He hopes the pastors and churches in Awaken will see themselves as part of a broader faith community — what he calls “the church of Dane County” — rather than as separate congregations doing their own thing.

“That informs how Awaken Dane is striving to help individual congregations thrive and to help the church of Dane County thrive,” he said. “The relationships that exist between the churches and the clergy are an important part of that.” 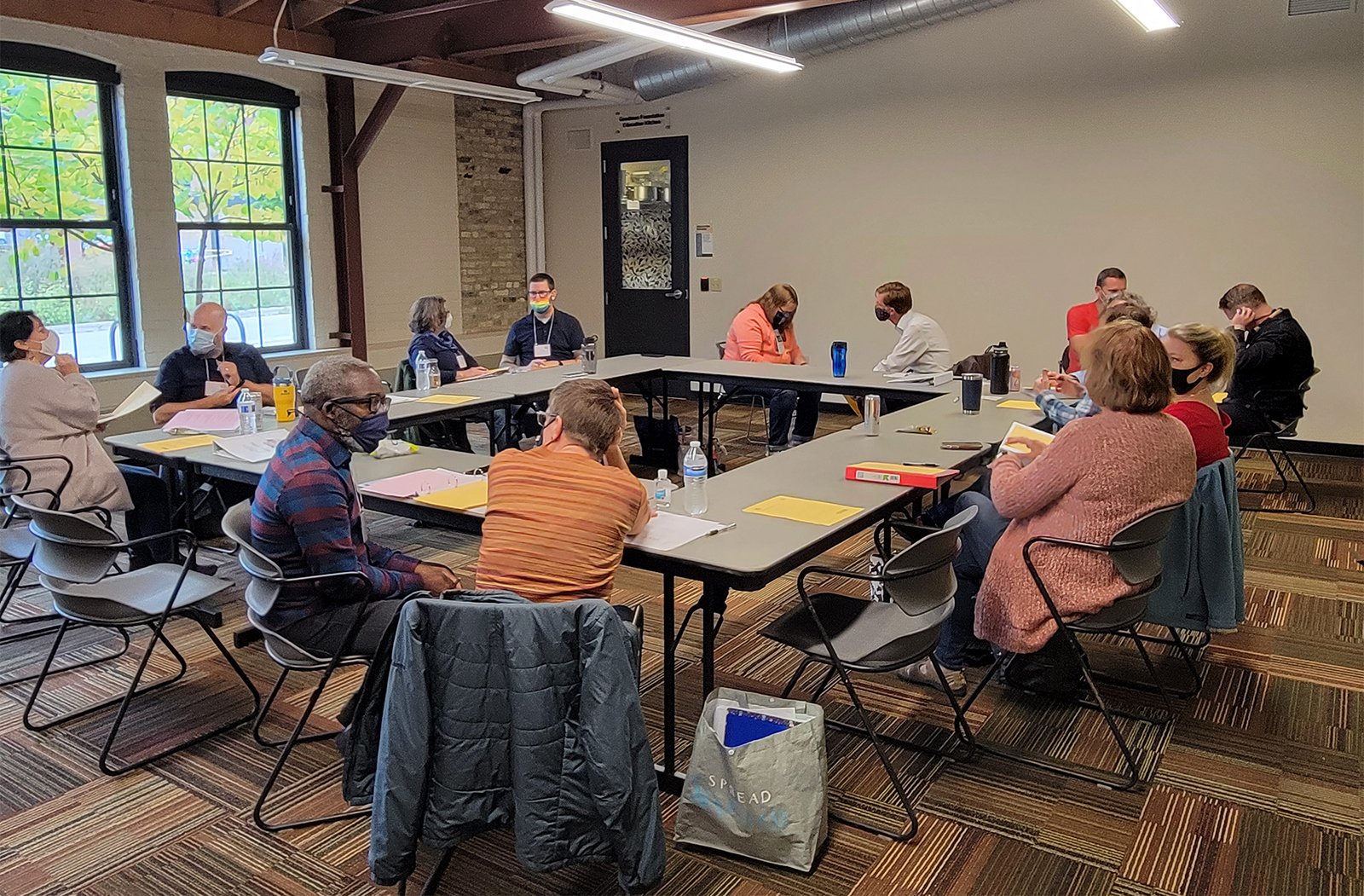 The pastors in the project meet on a regular basis for group discussions, using a curriculum called “Stepping Out,” designed to help church members get out into the community. The pastors each also lead a small group at their churches, using the same curriculum.

Nine congregations signed up to be part of the first cohort of the project.

In the mid-February gathering, the cohort of Awaken Dane pastors began with a practice called “Dwelling in the Word,” a process of Bible reading and reflection. The group read through a Bible passage several times, then broke into small groups to discuss it. The idea is not to dissect the text for meaning but to allow the text to speak to their life and ministry, said Rev. Lisa Nelson, a Lutheran pastor and one of the coaches working with the Awaken Dane cohort.

Often pastors and churches get so tied up in figuring out how to interpret a text that they forget to listen to the text, said Nelson. So, they may miss what the Holy Spirit wants to tell them, she said. By focusing on listening, the pastors can allow the Spirit to speak to them.

“What we want to do is follow the Holy Spirit’s lead — so that’s a key component,” she said.

Nelson, a life coach and pastor, said group discussions are meant to help pastors rethink their approach to ministry. In the past, she said, churches assumed that they had all the spiritual answers and that if people wanted to find God, they had to show up on Sundays.

Instead, the Awaken Dane project hopes to get churches to see that God is at work everywhere— and to get congregations to go out in the community to see what God is up to and to join in God’s work there. That approach, said Nelson, frees churches up from thinking they have to have all the answers. Nelson said her own small congregation — which is not part of Awaken Dane — has been working on ways to connect with neighbors, using a similar approach. Before the pandemic started, the church bought a gas fire pit and began setting chairs on the church lawn not far from the sidewalk. Members began greeting people who were walking by — and talking with them and their kids.

During the summer of 2021, the church started holding cookouts and inviting neighbors to attend. The church of about 20 people also has a food pantry and offers a free meal once a week.

Nelson said many small churches — like the one she serves — still feel they have something to offer, despite their struggles. This new approach, she said, has given her church, which has considered closing in recent years, some hope for the future.

“They don’t feel like God’s done with them yet,” she said.

RELATED: Tiny churches, big hopes: Why some thrive despite the odds