SPRING GREEN, Wis. (RNS) — The Rev. Derek Miller has seen the future of the church in America.

And it is small.

On a Sunday morning in early November, Miller, guitar in hand, stepped up to the microphone at Cornerstone Church of Spring Green and began singing the familiar Charles Wesley hymn “O for a Thousand Tongues to Sing.”

A handful of people scattered in the sanctuary sang along, including a church elder in the front row next to a pair of young kids tapping on tambourines. By the time all the latecomers had arrived, there were 12 people in the congregation.

Things used to be different. Five years ago, when the church was at its height, as many as 100 people would show up for Sunday service. But the 2020 election, the racial reckoning after the death of George Floyd and COVID-19 have taken their toll. On a good day, if everyone shows up, there might be 30 people.

Services are often a one-man show. On this Sunday, Miller led the singing, preached the sermon and even handled the video for the livestream of the service, moving the camera closer to the pulpit and greeting people online before preaching. And he wrote the song the congregation sang during Communion.

“Running over, I’m grateful for your sacrifice,” he sang in a cheerful baritone. “Running over, pour your blessings through my life.” 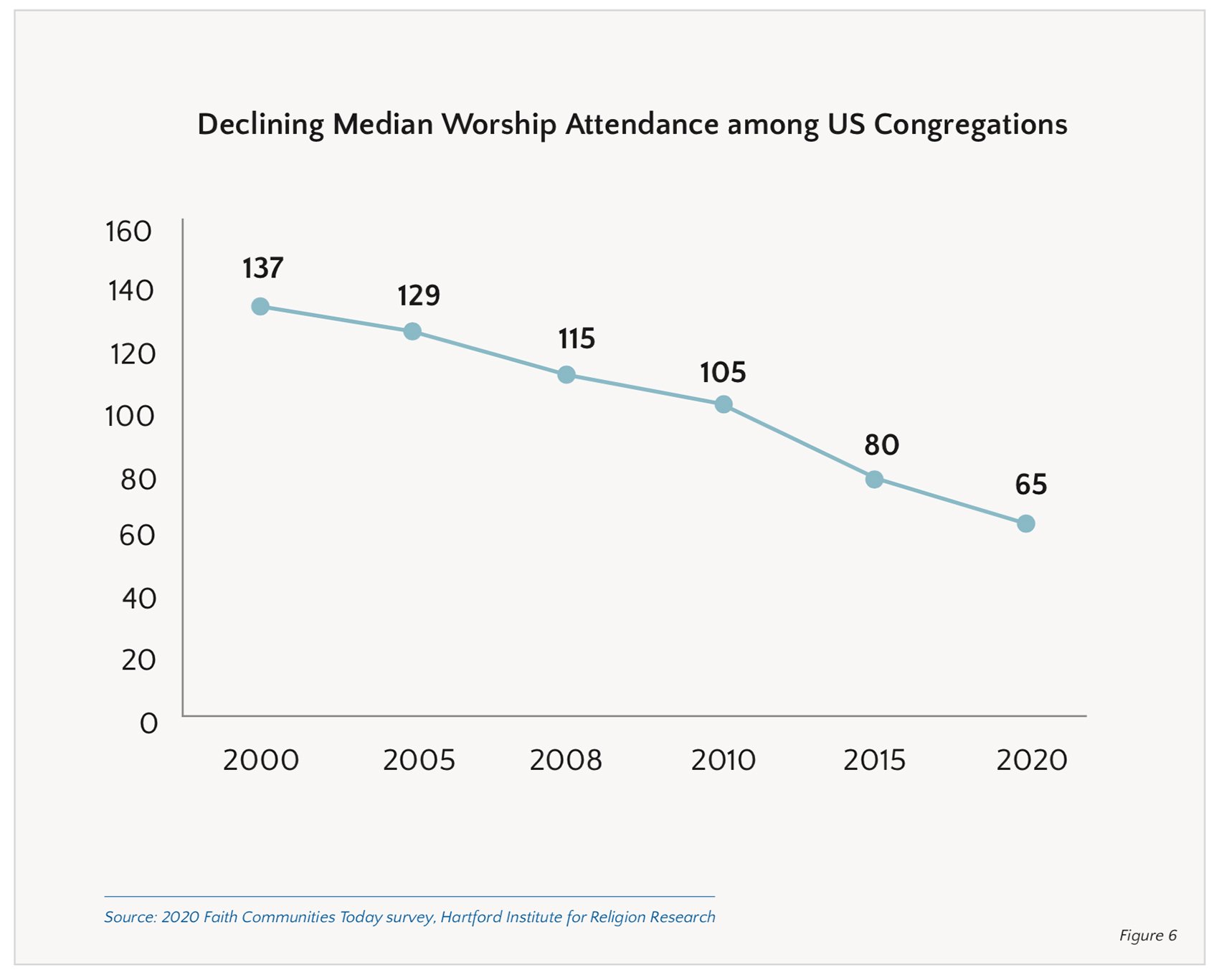 That’s a marked change from two decades earlier, when the 2000 Faith Communities Today survey found the median congregation had 137 people and fewer than half of congregations had fewer than 100 people.

RELATED: Some congregations got mega PPP loans. Others got tiny ones.

“Shrinking attendance figures coupled with an increase in the number and percent of small congregations obviously indicates that a good many congregations are not growing,” the study’s authors found. “Indeed, the median rate of change between 2015 and 2020 was a negative 7%,” meaning half of all congregations declined in attendance by at least 7%.

While most congregations are small, however, most worshippers attend a larger congregation. Another prominent report, the National Congregations Study, found that while the average congregation is small — about 70 people — the majority of churchgoers are worshipping in a congregation of about 400 people.

The report reflects the reality that religious Americans are being sorted into two kinds of churches — megachurches, and minichurches like Cornerstone. 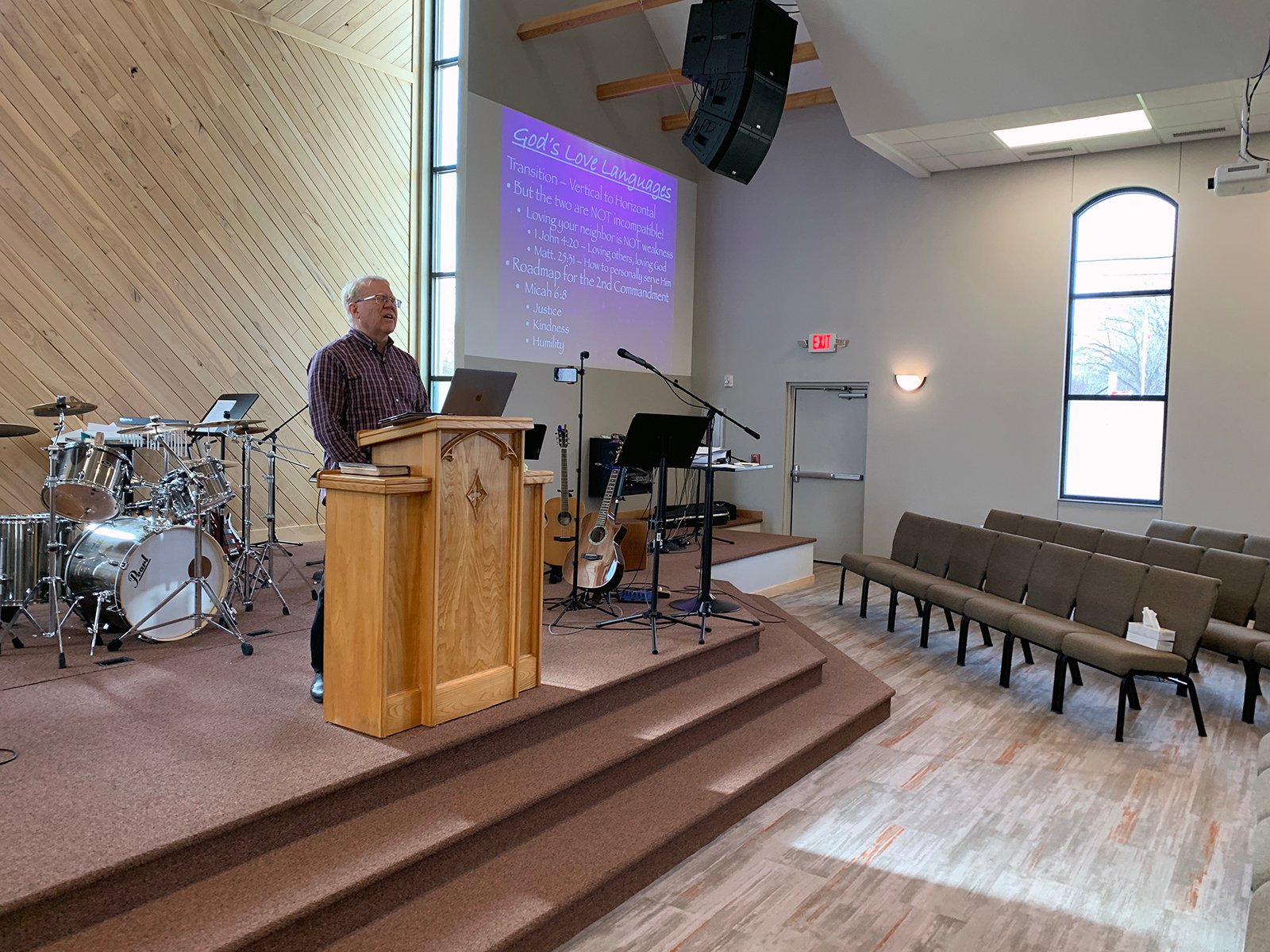 Among the worshippers at Cornerstone that Sunday was Lisa McDougal, a longtime friend of Miller and his wife, Deb. McDougal said she appreciates being part of a small congregation, where relationships matter more than the spectacle of a Sunday morning.

“It’s like a house church in a really nice setting or a small group,” she said. “I’m not interested in a large congregation.”

Ryan Burge, assistant professor of sociology at Eastern Illinois University, knows about the challenges of small churches firsthand. For about a decade and a half, he’s been pastor of First Baptist Church in Mount Vernon, Illinois, a small American Baptist congregation, a job he first started while a grad student.

Small-church pastors can often be under tremendous pressure, said Burge. They are often the only person keeping things running and it’s difficult to take time off because there’s no one else to preach or lead services. And if they leave, what will happen to the church?

Still, even among small churches, there are differences. 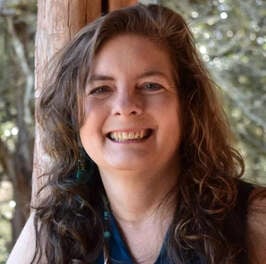 At Real Hope Community Church in Oswego, Illinois, a Free Methodist congregation about 50 miles west of Chicago, the Rev. Jill Richardson said her congregation of about 20 people tries to focus on building close relationships and reaching out to the community.

The church recently bought its first building, a three-bedroom house near downtown Oswego, which it hopes to rehab into a meeting space for worship and community events. Richardson hopes to have a community garden as well, though the project will take awhile.

The pastor feels like she’s right where God wants her to be.

“This is the best church I have ever been part of,” she said.

The Millers, who met at a Maranatha campus ministry while students at the University of Wisconsin, pastored a church in Madison for years before starting Cornerstone. They moved about an hour west to Spring Green, a small town that’s home to Frank Lloyd Wright’s Taliesin estate, after feeling God’s call to plant a new congregation. They hoped to build a church that had close ties to the community. 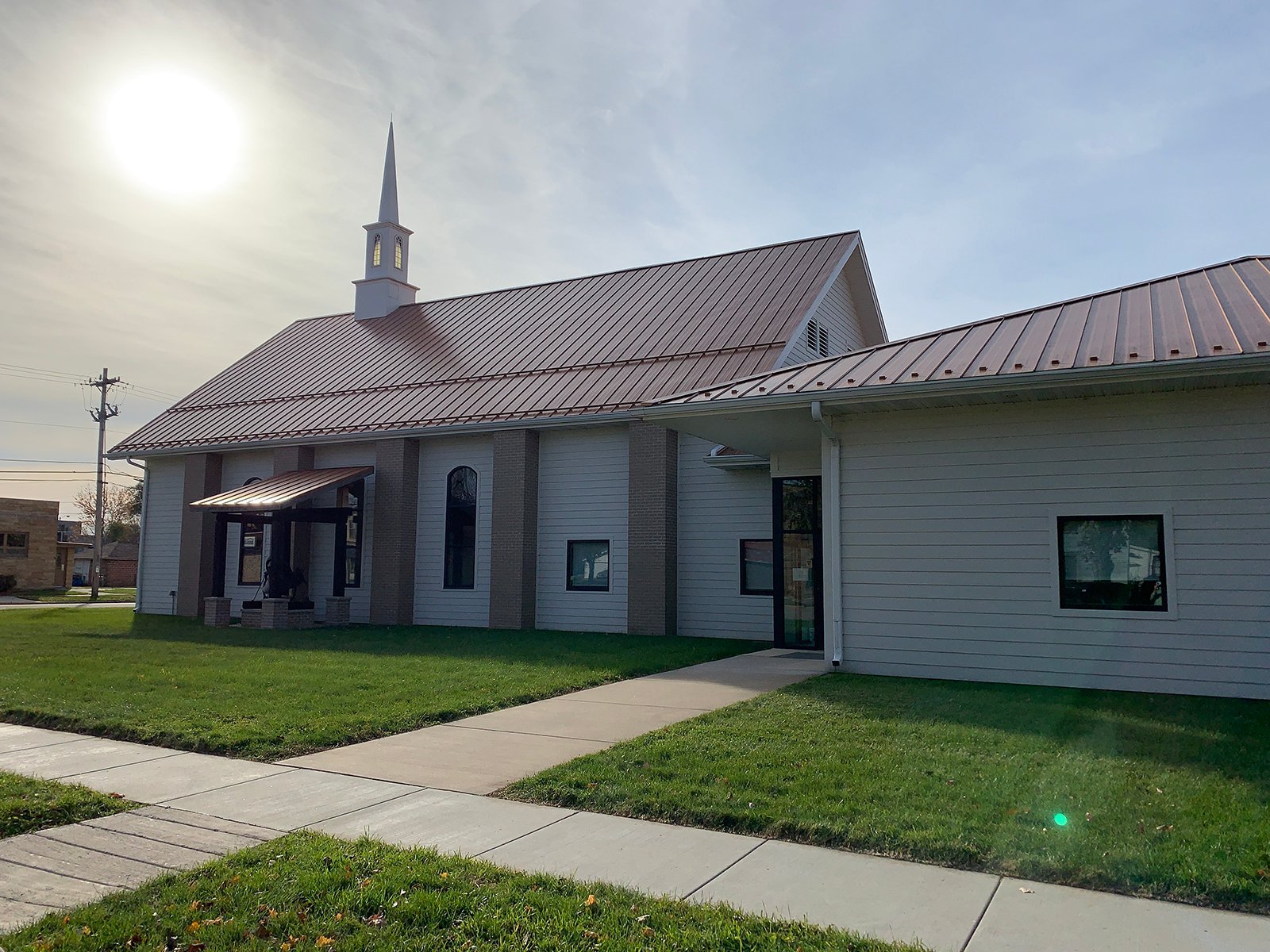 After a friend died of a heart attack during a friendly game of racquetball, Derek Miller decided to become trained as an emergency medical technician and join the town’s volunteer fire department. He now serves as the ambulance chief for the department, providing emergency care to people being transported to the hospital.

His volunteer work as an EMT — which during COVID-19 has meant providing testing and vaccinations — allows Miller to minister to the community.

“I really think more pastors, especially those in small communities, ought to do this,” he said. “I can’t say it helped grow the church — so my recommendation would come with that caveat. But I really do think it’s a great way to pastor your community.”

Five years ago, the church’s building — formerly home to a Congregational church — burned down. Little was saved from the building but some stained glass and the church bell, which is now displayed outside the new building that stands on the same site. The fire proved a catalyst for the church. Members rallied to rebuild and neighbors donated to the cause, providing about $30,000 in assistance.

The new building, which can seat about 200 people, features a large fellowship hall where the congregation hosted community meals pre-COVID, and a modern sanctuary equipped with a pair of projectors mounted on the ceiling. The back wall, which soars more than 30 feet high, is paneled in ash board, all milled from a more than century-old tree that once stood on the property and was taken down after the fire.

Things began to fray during the Trump era. The Millers were skeptical of Donald Trump as a candidate and, while they didn’t preach against Trump, if people asked, the Millers shared their doubts.

“That did not necessarily go over very well,” Derek Miller said.

Things got worse in 2020 after Deb Miller, who serves on the Spring Green village board, recorded a short home video detailing why she would not vote for Trump, despite being a lifelong Republican. The video was picked up by a group called Republican Voters Against Trump and went viral, eventually being shown in a montage during the Democratic National Convention — a turn of events that caught her by surprise.

“I didn’t expect anyone to see it,” she said.

The pandemic put Derek Miller’s roles as pastor and EMT in conflict. He saw people with COVID-19 die in the ambulance and when he insisted on social distancing and wearing masks in church, some people objected or left. One saving grace for the Millers has been that they don’t rely on the church for most of their income. An IT professional, Miller ran a consultant business for years and eventually went to work for a local utility about eight years ago.

Balancing all three roles can be a challenge and the life of a small-church pastor is never easy, even in the best of times. These days, with COVID-19, polarization and the ongoing splintering of the evangelical world, Miller wonders if there’s a place for a church like Cornerstone over the long haul. Will there be enough people who share the Millers’ conservative theological beliefs and their concerns for social issues like race and refugees — which they believe are also issues the Bible cares about — to make the church sustainable?

Still, he believes in the importance of small congregations. He worries that in larger congregations, it’s too easy to be a spectator or a consumer — or to feel cut off from involvement or decision-making in a church’s ministries.

“I believe in small churches because I believe ministry belongs in the hands of regular people,” he said.

RELATED: More than $689,000 raised for small churches threatened by COVID