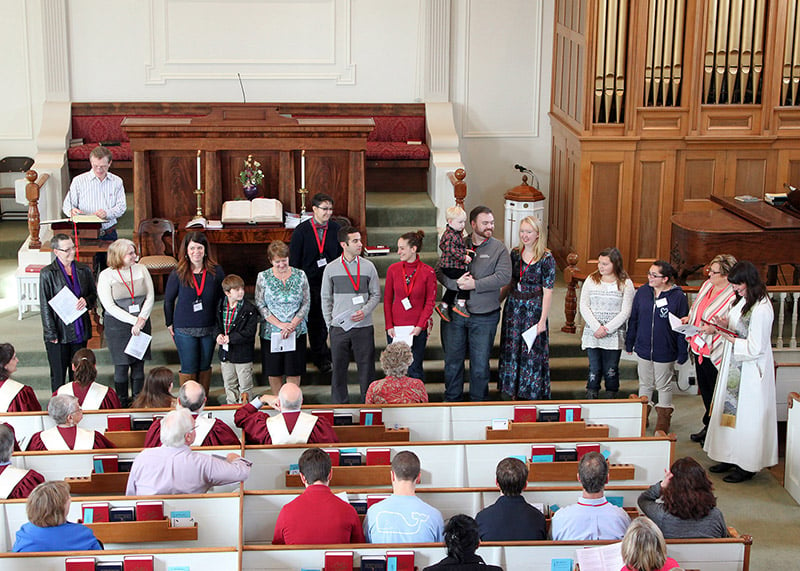 (RNS) Hope, by nature, is defiant, counterintuitive and lodged in surprising places.

So a new report detailing the spiritual, demographic and financial challenges faced by small religious congregations meant little to the Rev. Robin Bartlett.

She plants her hopes for First Church in Sterling, Mass., on firmer ground.

“This does not look like a dying and sad church. It looks like a vibrant and active church on a Sunday morning,” said Bartlett, who usually sees 130 people on Sundays, even though the sanctuary was built for the days when more than 300 came to worship.

Just this year, 30 new members have joined, including young adults such as Ann Taft, 28, who delighted in the warm welcome at First Church: “Everyone was just so excited that I was there.” 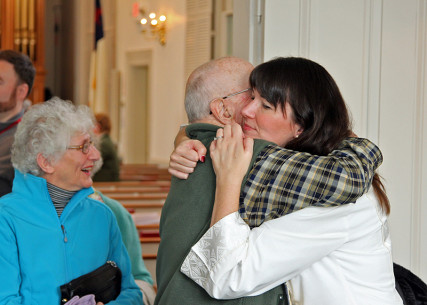 More people in the pews, more energy for programs, more funds to maintain the roof — these are all keys to survival for such small congregations, according to the latest Faith Communities Today report, released Monday (Jan. 4) by the Hartford Institute for Religion Research.

It finds that congregations with fewer than 100 in weekend attendance — the most vulnerable to collapse — rose to 58 percent in 2015, up from 49 percent five years ago.

Yet the report is optimistically titled: “American Congregations 2015: Thriving and Surviving.”

David Roozen, author of the report and retired director of the institute, wanted to highlight signs of hope in the research by asking about innovation, growth and positive change, particularly in those very small churches.

He analyzed data from clergy and senior church leaders at 4,436 U.S. congregations. Although congregations serving Jews, Muslims, Buddhists and other religions were represented, they were too few for analysis. Ninety percent of U.S. congregations are Protestant (22 percent mainline and 68 percent white evangelical or historically black congregations) and 6.5 percent are Catholic, said Roozen.

Survival is relatively easy to measure. 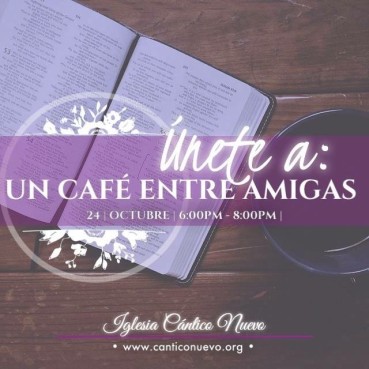 An invitation to an event at New Song Church in Longwood, Fla. Photo courtesy of Rev. Jonathan Iguina

When the Rev. Jonathan Iguina arrived at Iglesia Cantico Nuevo (New Song Church) three years ago, the Pentecostal congregation in a commercial plaza in Longwood, Fla., was on the verge of shutting its doors. The last 19 people in the congregation welcomed the new pastor the first Sunday — and never came back.

Iguina dug in. He cold-called former members. He found musicians to play the instruments left behind. He cut “unfruitful” programs such as “a visiting ministry that wasn’t visiting anyone” and boosted outreach to families with children.

As he concentrated on “nurturing the people I found, setting a focus on drawing closer to God,” Iguina said, attendance has inched up to 90 on Sunday mornings, and the church’s debt has been replaced by a surplus.

Cantico Nuevo is an exception, according to the study’s grim overall findings for congregations under 100 in weekend worship: Only about 18 percent say they’re thriving, and 29 percent declare themselves OK.

Meanwhile, two mainline churches in Northern Virginia are selling their grounds to nonprofit groups that will build affordable housing. And at the Southern Baptist Convention, a report showed an average of 1,000 churches a year disappeared from the denomination’s database.

Roozen found that congregations willing to “change to meet new challenges” fell to 62 percent in 2015, down from 74 percent a decade ago.

“Thriving,” however, is a more subjective term. “It comes down to being all you can be in a religious setting,” he said. “These congregations feel they are energetically living out their understanding of their call.”

Hope thrives where change is welcome, Roozen said. “Thriving congregations are nearly 10 times more likely to have changed themselves than are struggling congregations.”

“That’s critical,” said Nancy Ammerman, professor of sociology of religion at Boston University. She observes that those aging congregations slipping toward insolvency “can take a long time to die because a handful of really determined folks will keep it going. That works — if they are willing to revolutionize themselves.

“People haven’t lost the urge to congregate together spiritually. But how they do it is being expressed differently and the churches that do well are reshaping constantly,” she said.

To him, this congregation is “a treasure hidden in a field,” he said, echoing a parable in the Gospel of Matthew.

“If we are only concerned with the numbers, that becomes discouraging and a trap,” he said. “It could be that we have just a small faithful group of people continue to be the membership but there is a ministry to the community that is a powerful witness of God’s love and grace.”

Even as they streamlined the programs inside the congregation, members ventured outside, with simple, low-cost activities such as making empanadas to hand out at Pentecost or taking an occasional prayer walk through the city, asking strangers, “How can we pray for you today?”

Old Bergen Church has two advantages over many small, old, urban churches.It has an endowment to support the facilities and its downtown location is proving to be a blessing. Six new housing towers, designed for urban professionals commuting to Manhattan, are being built within four blocks of the church.

These advantages “take the anxiety and pressure off me as a pastor. We aren’t absolutely living on the edge. It’s very possible that our best days are still ahead of us,” said Brown.

In Roozen’s study, the percentage of congregations that reported more than 2 percent growth in worship attendance was at 45 percent, down from 57 percent in 2005.

Congregations that beat the 2 percent growth rate were:

Bethany Lutheran Church, an evangelical congregation in Bigfork, Mont., has none of those advantages.

It’s even smaller than it was when the Rev. Christopher Miller arrived nearly five years ago — down to 92 people at Sunday worship. A contentious split with the more liberal Evangelical Lutheran Church in America prompted young families to leave — and leave behind the debt incurred when the congregation expanded the sanctuary and built new facilities for the youth.

Still, Miller looks up:  “I don’t know what Bethany will look like on quantitative terms but by qualitative ones, God is showing himself faithful.”

His motto is from the Little Mermaid’s song in the Disney film: “I want to be where the people are … ”

READ: The megachurch boom rolls on, but concerns rise as well

That means building relationships, weaving young people into the life of the church, and the church into the community and beyond. The Bethany congregation has built six churches in Honduras with funds raised washing cars and selling huckleberry pies. Next up, installing a free library stand in downtown Bigfork where people who pause to browse can drop a prayer request in a mail slot below the books. The idea, said Miller, is to “show people what is important to them is important to us.”

Attracting young adults and families is a challenge in any location at a time when restless “church shoppers” move amid competing congregations, said Roozen. 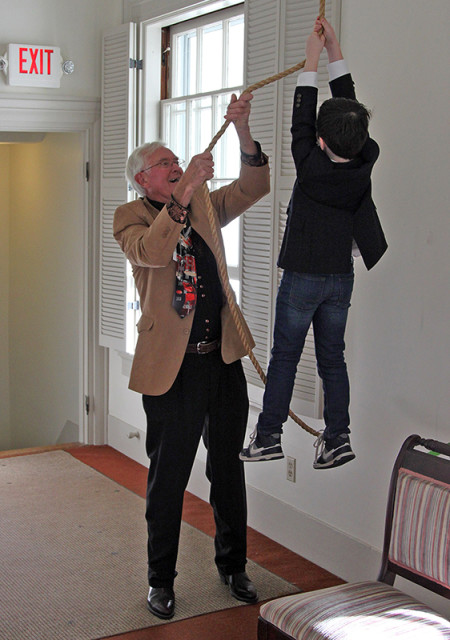 While more than 20 percent of the U.S. population is 18–34 years old, that age group represented only 10 percent of U.S. congregations in 2015, down from 15 percent in 2010, the congregations study finds. More alarming, Roozen said, is that fewer churches were making this age group a priority.

The latest Pew Research Landscape study to examine American’s beliefs and practices, released in November, found slow but steady decline from 2007 in the percentages of U.S. adults who say they believe in God, pray daily and regularly go to church or other religious services all have declined modestly in recent years. The chief reason: The rise of people, particularly Millennials, who identify with no religion.

Doug Davis, who grew up attending First Church in Sterling and at age 50 is the youngest deacon, said church elders looked around and saw few young adults in the pews. Davis said, “We realized we were falling behind in energy and that was no way to be vibrant.”

But Bartlett, the 39-year-old pastor, a married mother of three, says membership is 285 people — “They just don’t all attend at the same time.”

When Bartlett started a “pub theology” night aimed at millennials, it was such a hit that older congregants complained, “We like beer! We want this, too!” So she’s added a second night, open to all ages.

Ann Taft is part of the young adult group and looks forward to discussion nights, dubbed “Eat, Pray, Learn.” Her husband, Andrew, once a “militant atheist,” is now on the operations committee. She serves on a task force investigating how the church can be more open to gays and lesbians.

Taft recalls when they were new in town and church-shopping. She soon found “there’s no time to search out and explore every theology,” and ultimately, she took Bartlett’s advice:

“Choose one and go with it and let that be the way God is revealed to you.”