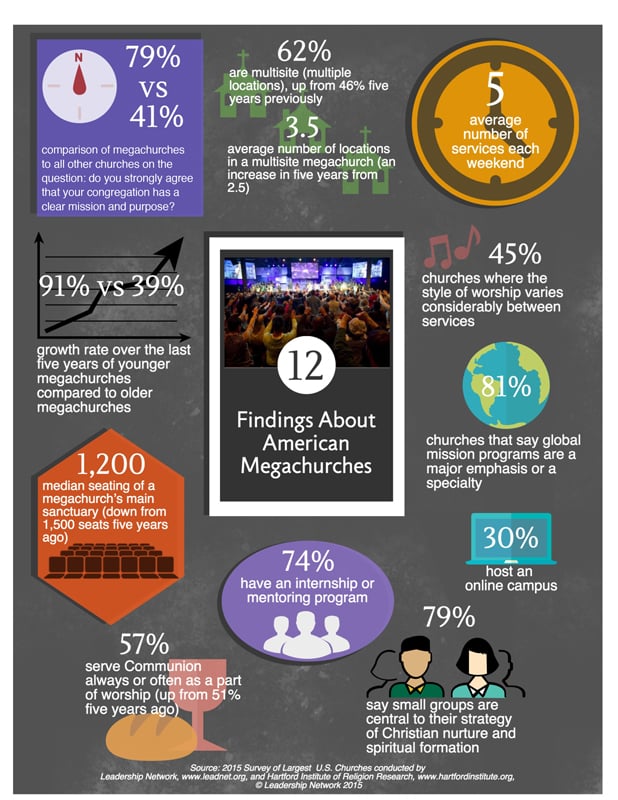 (RNS) Change is coming to American megachurches — those behemoths for believers that now dot the religious landscape.

There are more participants in megachurch worship than ever.

“Last weekend 1 in 10 adults and children who went to a Protestant church went to a megachurch — about 5 million people,” said Warren Bird, director of research for Leadership Network and co-author of a megachurch study released Wednesday (Dec. 2).

But individual attendance is down to once or twice a month — or less.

“They think ‘regular attendance’ is ‘I get there when I can,’” said the second co-author, sociologist Scott Thumma, director of the Hartford Institute for Religion Research. The study examines megachurches (2,000 people in weekend attendance is the basic qualifier) in comparison with other, smaller congregations.

“We found many of these large, successful congregations still have many of the same challenges of smaller congregations. They are not immune to the cultural dynamics in society,” said Thumma.

“Everyone is trying to attract new people and hold on to them and make them disciples. But, today, people are seekers and shoppers looking for a temporary experience of worship, not a long-term commitment,” said Thumma.

Megachurches, many launched a quarter century ago by baby boomers, now see slippage in the younger generations. Participation by millennials, ages 18-34, has flattened out at about 19 percent since 2010. But Gen-X attendees, ages 35-49, are drifting out the door — down from 28 percent in in 2010 to 23 percent today.

The fickle, fast-moving faithful have prompted other changes.

Megachurches are still being built. Indeed, the study finds those established since 1990 are growing at more than double the rate of older megachurches. But the study, funded by the Beck Group, which builds megachurches, finds the new churches are constructed very differently.

Congregations are “getting bigger by getting smaller,” said Bird. They’re building smaller main sanctuaries (median down from 1,500 seats to 1,200 seats) but holding more services on more campuses.

Bird recounts a comment from Pastor Larry Osborne, who built North Coast Church in Vista, Calif. “A woman told him, ‘I like your church because it’s so much more intimate and personal.’”

She didn’t realize North Coast Church serves 10,000 people in dozens of services — all with the same sermon but varying in worship styles and music — on four campuses, from a 40-acre plaza of worship settings in Vista to a recast movie theater setting serving San Marcos/Escondido.

Five years ago, 46 percent of megachurches had multiple locations. Now it’s 62 percent. And the number of their sites bumped up, too — from an average of 2.5 sites to 3.5.

Older megachurch congregations, such as North Coast, have a more diverse age range, higher member involvement in programming and $500 more in per capita giving than the big churches founded since 1990, the study finds. 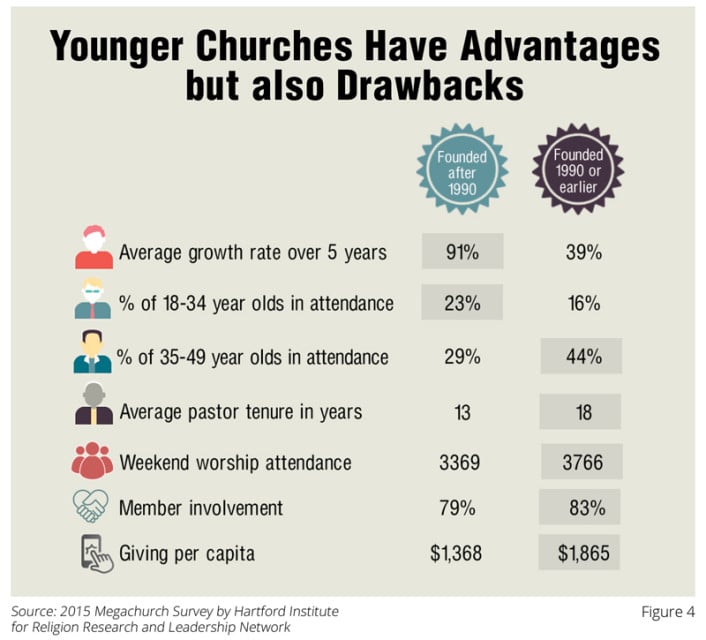 The report, based on a survey of “key informants” — senior pastors or executive staff of congregations — also found a shift in how these churches describe their religious self-image.

Every year since Thumma and Bird began studying megachurches in 2000, the percentage that describe themselves as “evangelical” has gone up. Now, it’s 71 percent, no matter what their denomination, said Bird.

About 40 percent of megachurches are nondenominational, and for those that do have ties, “it’s not really a draw. God and Rick Warren know Saddleback Church is Southern Baptist,” said Bird, but most people who worship there don’t.

Most pastors said denominational ties were unimportant or not very important to their congregation.

What is increasingly important is service to others outside their own congregations.

Thumma said that “for a very long time, the focus of megachurch programming was inward — taking care of our own people. Now there’s a huge shift to outreach: 43 percent said global missions were a specialty of their congregations, and 44 percent said one of their specialties was community service and helping those in need.”

Worshippers care most, Bird said, “about finding a church that knows where it’s going and what it’s about. They like clarity of vision in a church.”

News
#PandemicPastoring report documents a ‘new era in ministry’
Follow us on Facebook!
Submit your photos to RNS