That’s how climate scientist Katharine Hayhoe describes the recently released report by the United Nations Intergovernmental Panel on Climate Change. Thousands of pages of unrelenting evidence the climate is changing: Heat waves in the summer are getting stronger, flooding is increasing, invasive species are moving into new areas.

Still, the chief scientist for The Nature Conservancy does not think the planet — or humans — are doomed.

The bestselling author of “Saving Us: A Climate Scientist’s Case for Hope and Healing in a Divided World,” Hayhoe is dogged about not giving in to despair and about the power of individual and collective advocacy. She recently worked with Netflix to create a website encouraging viewers to take action to stop climate change after watching the Oscar-nominated film “Don’t Look Up.”

Raised in the Plymouth Brethren tradition and married to a pastor, Hayhoe also frequently speaks about the intersection of science and her Christian faith.

After all, when you are studying science, “what are you studying other than God’s creation?” observed Hayhoe, a Paul Whitfield Horn distinguished professor and the political science endowed chair in public policy and public law in the Department of Political Science at Texas Tech University.

On her way through Chicago while “bundling” a number of recent speaking engagements across the Midwest — doing them in one swoop makes for a smaller carbon footprint than multiple trips back and forth from her home in Texas, she explained — Hayhoe spoke with Religion News Service about faith, hope and science.

How do faith and science fit together for you?

I grew up in a home where my dad was a science teacher as well as a teacher in the local church, and so I grew up with the perspective that if we truly believe that the same God created the universe and inspired the Bible, then how could the two possibly be in conflict with each other? How could studying God’s written word be in conflict with God’s expressed word?

Now, of course, sometimes they appear to be in conflict. But isn’t that just because of our limited understanding of our theology or our science or sometimes both?

If we begin with the fundamental premise that if they come from the same place they can’t be in conflict, then we have a very different perspective on it than the one you commonly hear today in the United States, which is that somehow studying science is against faith, against God or against Christianity.

Is the idea that evangelical Christians reject science — and, in particular, climate change — accurate? 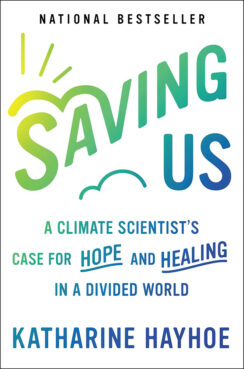 “Saving Us: A Climate Scientist’s Case for Hope and Healing in a Divided World” by Katharine Hayhoe. Courtesy image

Today, many Christians — and I say Christians deliberately; I do not only mean evangelicals, I also mean white Catholics — have objections to and commonly reject climate science. Why is that? It’s not because of any theology at all.

If you look at the Bible, book one, chapter one says God gave humans responsibility over every living thing on this planet. All through the Bible, it talks about God’s love and care for the tiniest and seemingly most insignificant aspects of creation. All through the New Testament, it talks about how Christians are to love one another; to be recognized by their love for each other; to care for the widows, the orphans, the poor, the vulnerable, the very ones who are most affected by climate change today. And in Revelation, it says God will destroy those who destroy the earth.

So why are Christians dragging their heels at the end in the United States? It’s because we have confused our politics with our theology. For many people today, their statement of faith is written first by their political ideology and their cultural beliefs, and only a very distant second by the Bible. And if the two come into conflict, they will go with ideology over the Bible.

What are some things that you find helpful in speaking across that divide?

If we want to bridge the divide, don’t begin the conversation with what divides us. Begin the conversation with something we have in common, that we agree on. It sounds so simple, but it’s so profound, because what we’re doing is we’re expressing that we agree. We’re on the same page. I respect you. I respect what you care about. I respect your values and I share them. Then because of what we both believe, or what we both care about, let me share with you why this issue is so important to me, why I’m so concerned about it. And — this is really important — let me share a positive, constructive solution.

I still remember the first time I spoke at a Christian college. I began with a statement of faith: We believe that God created this amazing planet we live on. We believe that he gave humans responsibility over every living thing on this planet. We believe that we are to love others as we’ve been loved by God. And so with this shared understanding, let’s look at what we are doing to our planet, and let’s look at how our actions are impacting our sisters and our brothers here, as well as on the other side of the world.

I’ve started conversations over a shared appreciation for food or for wine or the fact that we both knit or we’re both moms or we both lived in Chicago or enjoy skiing. As long as we start with something we truly have in common, then we can build the bridge to why it matters to both of us and what we can do to fix it. And if we don’t know what we have in common, then ask questions rather than telling people things.

RELATED: For Christians, the green revolution is stalling — and politics may be why

What are your takeaways from the latest IPCC report?

The IPCC reports are like doorstops of doom — thousands of pages that summarize the results of tens of thousands of peer reviewed scientific studies that are once again clearly stating that climate is changing, humans are responsible, the impacts are serious and the time to act is now.

So what’s new about this latest report? It shows why it matters. It says: Here’s what is already happening right here, right now. No matter where you live, here’s how climate change is affecting your water, your food, the safety of your homes, your economy, your energy systems, even national security, our ecosystems, our agriculture. Here is how these changes are affecting us. Here is how unequally these changes are distributed. It shows very clearly how the impacts of climate change fall disproportionately on the poorest and most vulnerable people. The 3.5 billion poorest in the world have produced 7% of heat-trapping gas emissions, yet they’re bearing the brunt of the impacts. And that speaks profoundly to us as people of faith.

What the report also says is that we are not adapting fast enough to the changes we’ve already seen, and if we don’t cut our emissions as much as possible, as soon as possible, we will not be able to adapt. 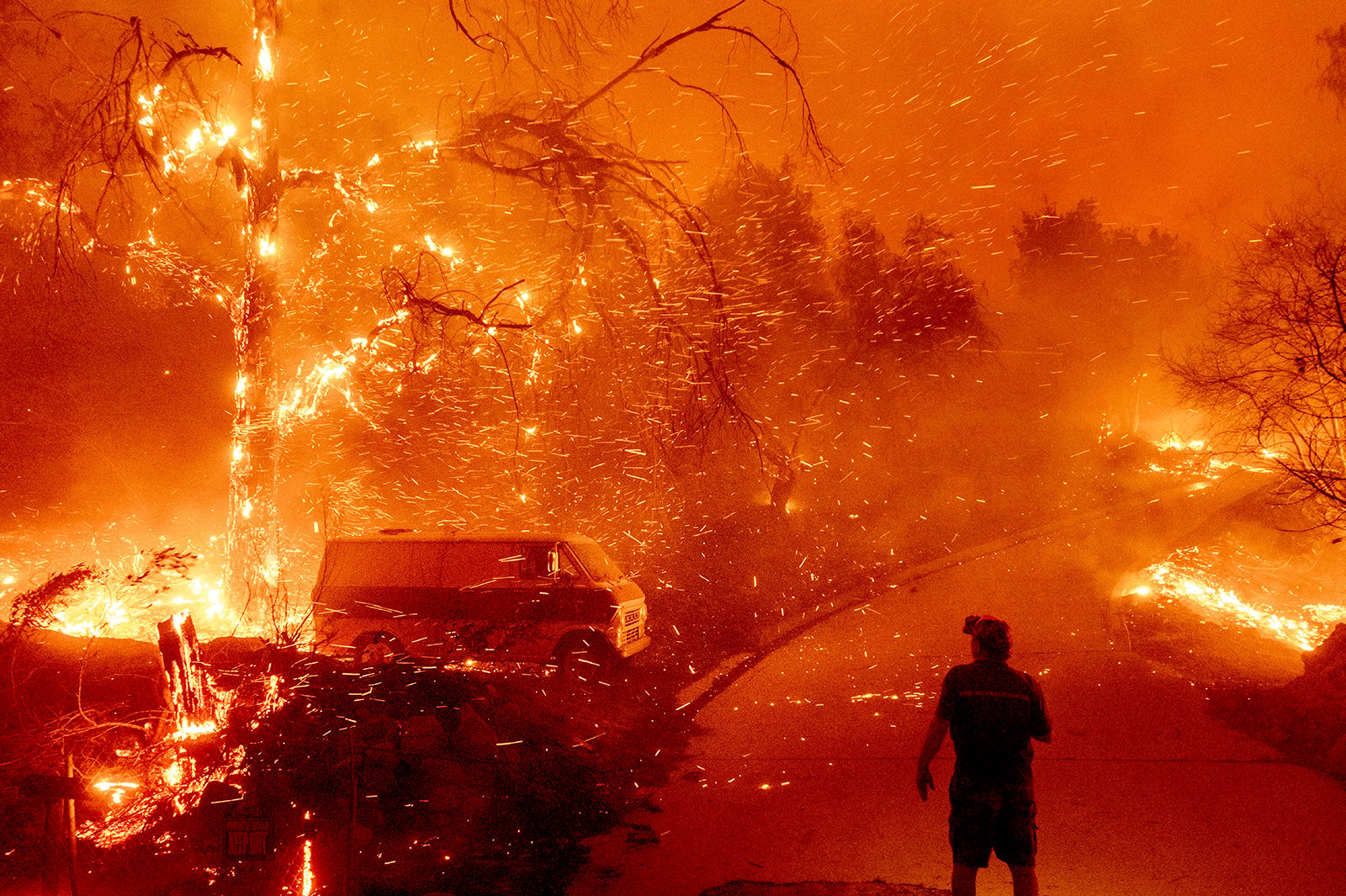 Bruce McDougal watches embers fly over his property as the Bond Fire burns through the Silverado community in Orange County, California, on Dec. 3, 2020. The United Nations on Feb. 28, 2022, released a new report on climate change. (AP Photo/Noah Berger, File)

You’ve said before the question you are most often asked is where you find hope. Where do you find hope in this report?

Here’s the hope: Our actions matter. Our actions do make a difference. The future that we will see is going to be radically different depending on the choices that we make.

Are there things individuals can be doing to combat climate change?

So the very first thing each of us can do is to use your voice — not to talk about the Arctic or sea ice or glaciers, but to talk about what is happening where we live. Out West, wildfires are burning greater area. Down South, hurricanes are getting stronger, dumping a lot more rain. Wherever we live, we see the impacts of climate change affecting our lives, our homes, our kids’ future, our health.

And we also need to use our voice to advocate for changes. What could our church do? Does it have a green team or a creation care team? Look around and see what other churches are doing, and maybe we could do some of that, too. Find out what your city is doing, and chances are, it’s doing more than you thought. Share that good news with other people who live in the same city. What’s your place of work doing?

That’s how the world changes: When individuals have the courage of their convictions and use their voices to call for change.

RELATED: Scientists ponder how to talk to the faithful about climate change 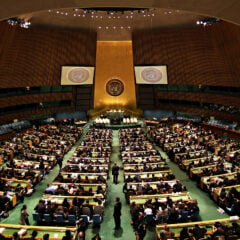 Religion Hub
UN sets March 15 as International Day to Combat Islamophobia
Follow us on Facebook!
Submit your photos to RNS