(RNS) — The April General Conference of The Church of Jesus Christ of Latter-day Saints is historically the time of year when the denomination releases its statistical reports about membership numbers, missionary service and new temples for the previous year.

In this year’s report of 2021 data, one main finding is that, as expected, COVID-19 has put a damper on every measurement of growth that wasn’t entirely within the church’s direct control. In other words, every metric is slowing down except for the number of new temples the church is building or planning. However, judging from what is happening with some other Christian religions around the world, it could have been much worse.

Here are five takeaway points about LDS growth around the world in 2021.

1. The church as a whole is still growing, but the growth rate continues to slow down.

In a time when other Christian churches are reporting actual losses of members, Mormonism is in positive territory, despite COVID-19. In the U.S., for instance, the Southern Baptists have 2 million fewer people on the rolls than they did in 2006. Within this challenging environment, the LDS church continues to grow around the world and even within the U.S., albeit much more slowly than in the past.

In 2021, the LDS church around the world reported growth just under 1%. The good news from the perspective of the mission-minded faith is that this was an improvement over the dismal year of 2020, when growth was just over half a percent during the worst of the shutdown during the pandemic.

The bad news is that it wasn’t as much of a bounce over 2020 as many had hoped for. The figure, .85% to be precise, seems to be continuing the long-term slowdown that was already happening in the years leading up to the pandemic.

According to Christian Anderson, a biophysicist in Utah who follows LDS church growth trends, even more concerning than the shrinking rate of growth is the raw number of new members being added each year. 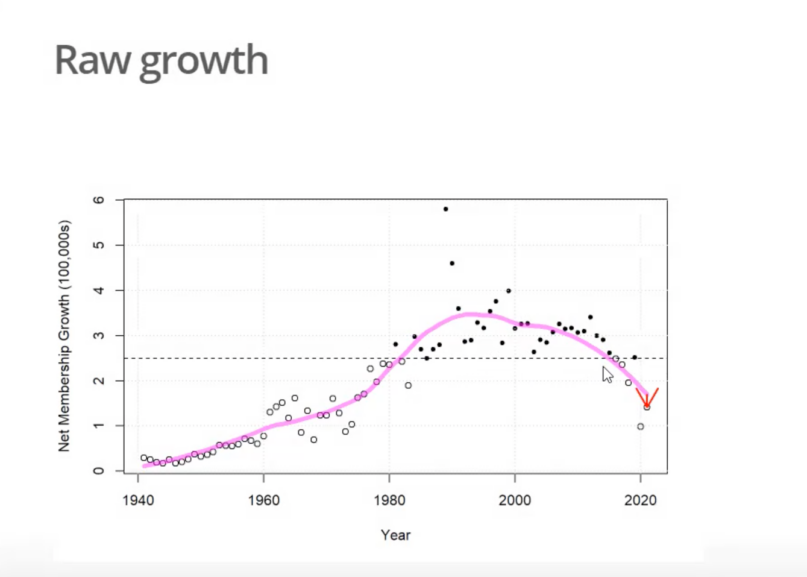 “The actual raw numbers are a really serious plunge, and it looks like that’s going to continue for a while,” he said in a Zoom interview, noting that the church has not added so few members to its rolls since the 1970s. At that time, the overall membership was only about a quarter of what it is now (4.17 million in 1978 vs. 16.8 million in 2021), so the raw increase represented a much more substantial rate of growth overall.

2. The main areas of growth are primarily in Africa.

For 2021, the church has resumed its helpful practice of releasing country-by-country statistics, so it is easy to see which regions of the world are experiencing the most and least growth. (The church did not provide country-by-country information for 2020, the first year of COVID-19 disruptions, so it’s terrific to see this information become available once more.)

As researcher Matt Martinich has pointed out on his LDS Church Growth website, eight of the top 10 nations in terms of growth were in Africa, with Congo leading the list with a 29.4% growth rate over the two years since 2019. The locations of countries that are losing members are more variable, with some in Europe (Bosnia and Herzegovina; France), the Caribbean (St. Kitts and Nevis; Granada) and Central Asia (Kazakhstan).

In the United States, growth has essentially been cut in half. We’re seeing a .6% growth rate spread over the two years, whereas in each of the two years before the pandemic (2018 and 2019), we saw that same rate over the course of a single year. And even that was a significant drop from the U.S. growth of a decade ago.

3. We haven’t yet seen “children of record” rebound to expected levels.

One potential area of concern is the lower than expected number of “children of record” reported for 2021. This refers to children whose parents have had them “blessed” as babies but who will not be counted as full members until they are baptized after turning age 8.

No one was surprised that in 2020, the church saw a serious drop in the number of children of record. After all, LDS chapels around the world were entirely shut down for much of the year, so many parents could not have their children formally blessed in sacrament meeting. Some parents chose to bless their children at home during the pandemic, but even then, there was the question of when such a ritual would be formally recorded in the church’s rolls; many aspects of record keeping were disrupted by the virus.

4. The missionary force has taken a hit.

Over the weekend at the church’s biannual General Conference, several speakers emphasized the importance of missionary work, especially for young men. And looking at the numbers, it’s no wonder: In 2019, the church reported more than 67,000 teaching (proselytizing) missionaries serving around the world; in 2021 that dropped to just 54,539.

Anderson was surprised that the 2021 mission numbers were so low. “That was the one I was most expecting to bounce,” he said, but added that it’s very possible that 2022 will show a return to pre-pandemic levels of missionaries, if COVID-19 restrictions continue to lift.

“Some 18-year-olds and 19-year-olds said, ‘Oh, I don’t want to go on a mission where we’re not going to be able to actually go out and talk to people,’ and so they postponed it for a year or two,” he said. “We may still see progress. That’s my short answer. If the number of missionaries is so significantly lower the year after that, then I think we have a problem.”

5. More members will have access to temples than ever before.

Finally, some good news for members of the church worldwide: They will be more likely than ever in the history of the church to live close to a temple. President Russell M. Nelson continues to announce new temples at each conference, including 17 just this past weekend in locations as far-flung as Brazzaville, Republic of Congo, and Maceió, Brazil.

This brings Nelson to a total of 100 new temples announced since he assumed leadership of the denomination in 2018.

Mormon growth slows to its lowest level since 1937. Here’s why that’s great news.

Why so many new Mormon temples when membership growth is flat?