(RNS) — What do you do when you want to have a Mormon-style Family Home Evening or religious discussion, but not everyone in your family belongs to the Church of Jesus Christ of Latter-day Saints?

If you’re Jon Ogden and his colleagues, you keep the basic idea — designating a time once a week when a family gathers to talk about spirituality — but you come up with your own curriculum. Enter Uplift Kids, which draws from psychological research and the world’s wisdom traditions to help families talk about religion and values with their kids, especially those ages 4 to 17.

The four creators (Ogden, Amanda Suarez, Drew Hansen, and Michelle Larson) got to know each other in 2019 when they were all attending the in-depth Spectra spirituality program offered by the mindfulness center Lower Lights. “We started talking about this as parents: What do you do to help kids have authentic spirituality? Especially when they are in an unorthodox setting, whether that’s inside or outside of religion.”

That includes mixed-faith marriages, where each partner is of a different faith, or one is active in a religion and the other is not.

The group tossed around ideas, tested a prototype on half a dozen families, revised the curriculum and then tested it more widely in 2020, this time with 36 families. They’ve continued tinkering and building resources as they’ve begun accepting subscriptions. Ogden said the response has been swift and enthusiastic. Since 2021, more than 1,600 people have downloaded the first lesson, which is free, and 750 have purchased a subscription.

“Members tell us they appreciate that they can pick and choose the approach they like,” he said, noting that each lesson draws from traditions including Buddhism, Hinduism, Christianity, Stoicism and Taoism, as well as current research about values and practices.

“People like that we are pulling from the latest social science research — that we cite studies showing that meditation is helpful or expressing gratitude is helpful.” The curriculum helps families talk about values such as kindness, generosity, compassion and forgiveness in ways that make sense to kids, without focusing on what kids “have” to believe in order to be moral and happy. 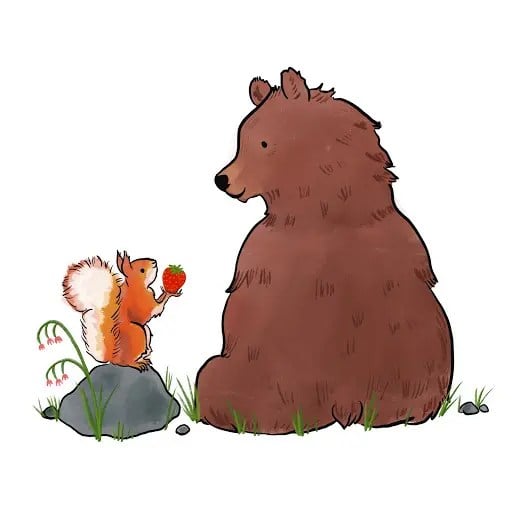 An illustration from a lesson on kindness. Image courtesy of Uplift Kids

“A lot of religious teaching is focused on right beliefs,” said Ogden. “And that makes sense, because that serves the institution really well. But we hear from families that they appreciate also being able to talk about values and emotional health.”

The curriculum was not designed with only Mormons and post-Mormons in mind, but Ogden says that’s been a major segment of the audience so far. All four of the creators have LDS connections, and they wanted to honor the fact that not all families feel comfortable sitting together on a Monday night to go through the church’s officially approved “Come Follow Me” curriculum.

“For some families, the ‘Come Follow Me’ manual isn’t quite expansive enough,” said Ogden. That’s especially true when one parent has stepped away from the church; if the other parent uses the church’s own materials it “can be triggering or potentially divisive.”

In the Mormon community, Ogden says Uplift Kids meets a need between the “all in” families, who only feel comfortable using the church’s official resources, and the wholly secular world that doesn’t see religion as necessarily positive. Uplift reaches a segment he calls “spiritual humanists” — people who may or may not participate in a religion but who honor the highest qualities that religion celebrates and nurtures.

“It’s increasingly clear to me that this group is very large and too often ignored. There’s this narrative that everyone is either in the church or out of the church, but there’s a large segment in the middle that appreciates certain aspects of religion without necessarily adhering to every belief.” Ogden said they hear often from couples who had abandoned the project of doing anything spiritual or religious as a family because it was the locus of too much pain and conflict. But with Uplift, the curriculum provides a neutral baseline for discussing life’s deepest questions and for listening to kids’ questions.

But, he acknowledges, “The whole project is very Mormon. The idea of nurturing spirituality at home is definitely influenced by the best aspects of Family Home Evening and the ‘home church’ idea that is part of ‘Come Follow Me.’”

In fact, one of the most popular downloads is related to the LDS emphasis on genealogy, a lesson on telling family stories. Called Lineage, this lesson draws on research showing that children who grow up with a strong sense of family history have a higher well-being and greater resilience. “One of the reasons it resonates so much is that people already have family stories, but they don’t necessarily have a time where they can sit down and share them,” Ogden explained. “The Lineage lesson helps them open up all of the stories, including the believing and the doubting stories together.”

Uplift Kids is expanding its offerings to meet popular demand, producing tangible products to complement the downloaded curriculum. The group has printed a deck of Emotion Cards depicting 36 different feelings, so kids and parents can use the illustrations to talk about complex emotions. “And then with the cards, we have games that families can play together to embody the emotions and work through the emotions, including ones that are perceived as negative, like anger and grief,” Ogden said. There’s also a journal.

Next year, Ogden hopes, Uplift Kids will start hosting in-person events for families. “Ideally, our goal is to get a weeklong retreat for families who have had a faith shift but still want spirituality in the home,” he said.

The more Uplift grows, the more convinced its founders are that many people who may have at least one foot out the doors of organized religion still long for deeper religious conversations and bonding with their families. Even within families that are religiously divided, “we can unite around the fact that we want these spiritual experiences more often.” 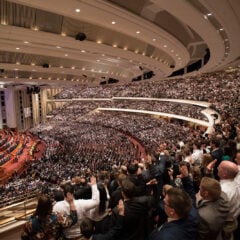 Flunking Sainthood
General Conference would be a good time for the LDS church to apologize to the Black community
Follow us on Facebook!
Submit your photos to RNS