(RNS) — If you are of a certain age, the historical event that shaped your life, beyond any other, was the assassination of President John F. Kennedy.

If you were of a certain disposition, you spent countless hours ruminating on the events of Nov. 22, 1963, certain there had been a conspiracy. You memorized every frame of the Zapruder home movie of the assassination; thought about what might have happened on the grassy knoll; wondered aloud over whether there had been one gunman, two, or more…

And, you obsessed over the single bullet theory — the idea that one bullet had pierced the neck of President Kennedy before it hit Texas Governor John Connally, who was riding in the same limousine.

I believe in the single bullet theory, though not in the way we first discussed it in the mid 1960s.

I believe we are living in the time of the single bullet. I believe there is a metaphorical single bullet — a single bullet that began its lethal career on June 17, 2015, fired from the gun of Dylann Roof — a bullet that multiplied and killed nine African Americans at Bible study at the Emanuel African Methodist Episcopal Church in Charleston, South Carolina. 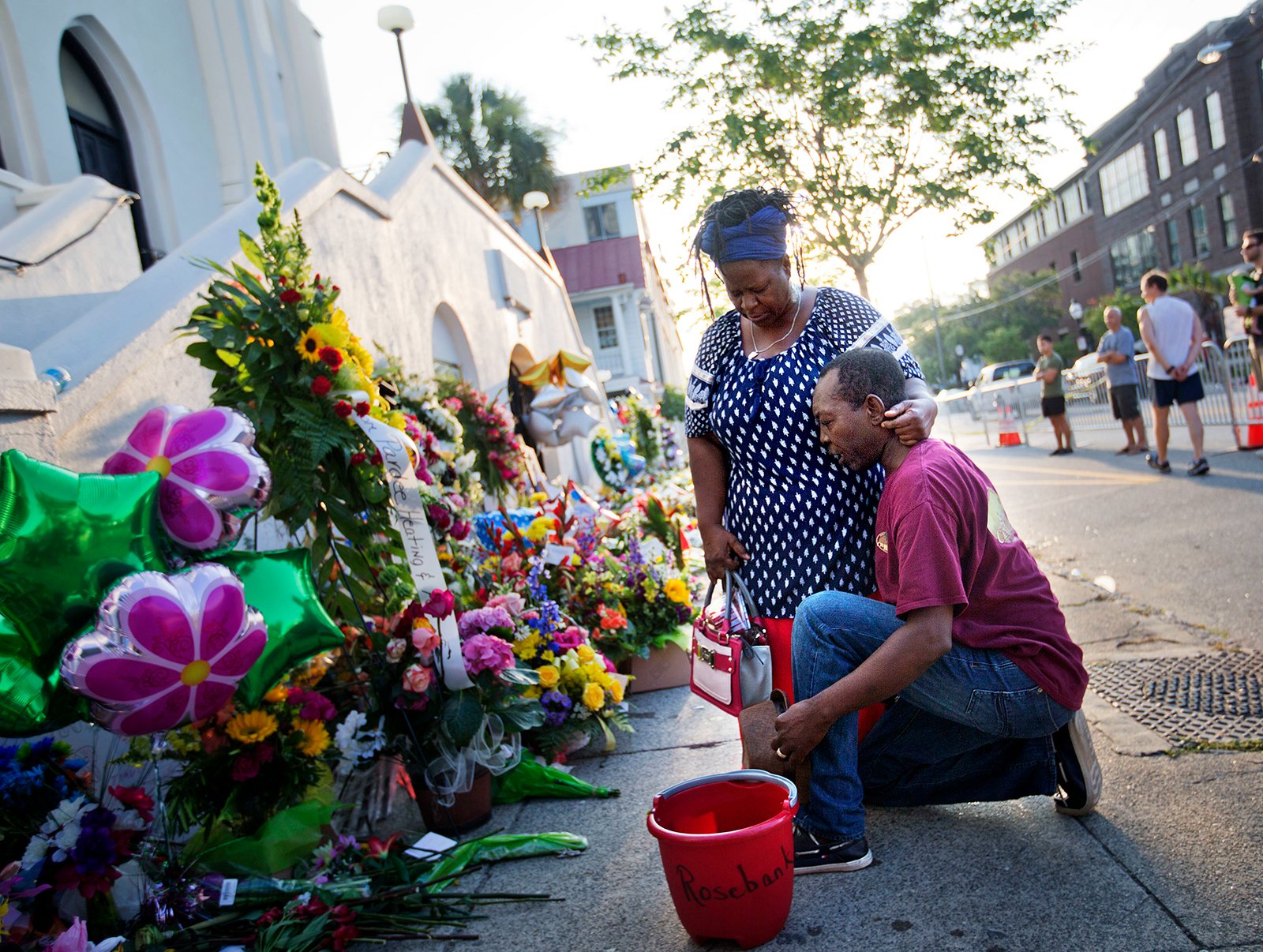 In this June 20, 2015, file photo, Allen Sanders, right, kneels next to his wife, Georgette, both of McClellanville, South Carolina, as they pray at a sidewalk memorial in memory of the shooting victims in front of Mother Emanuel AME Church in Charleston, South Carolina. (AP Photo/David Goldman, File)

The single bullet trajectory continued. Next time around, on October 27, 2018, the bullet multiplied and cut down eleven people and wounded six at the Tree of Life Synagogue in Pittsburgh, Pennsylvania. As in the killing at Mother Emanuel, the victims were in the midst of engaging a sacred text, the Torah, in the middle of the Shabbat morning service. It was to be the single worst day in American Jewish history.

But, what pulled the trigger was not his finger, it was his white supremacist antisemitic ideology.

The targeted synagogue had supported HIAS, the Hebrew Immigrant Aid Society, which resettles immigrants in this country. The shooter hates immigrants. Therefore, he hates HIAS. Therefore, he hates the Jews who have supported HIAS. He believed in the “great replacement theory” — the conspiracy theory that suggests Jews are actively recruiting non-whites to enter America in order to replace white people.

It is a conspiracy theory that has become increasingly popular. Fox News host Tucker Carlson has made this theory part of his media arsenal; he has parroted the theory in more than 400 episodes of his show. So have Republican politicians. 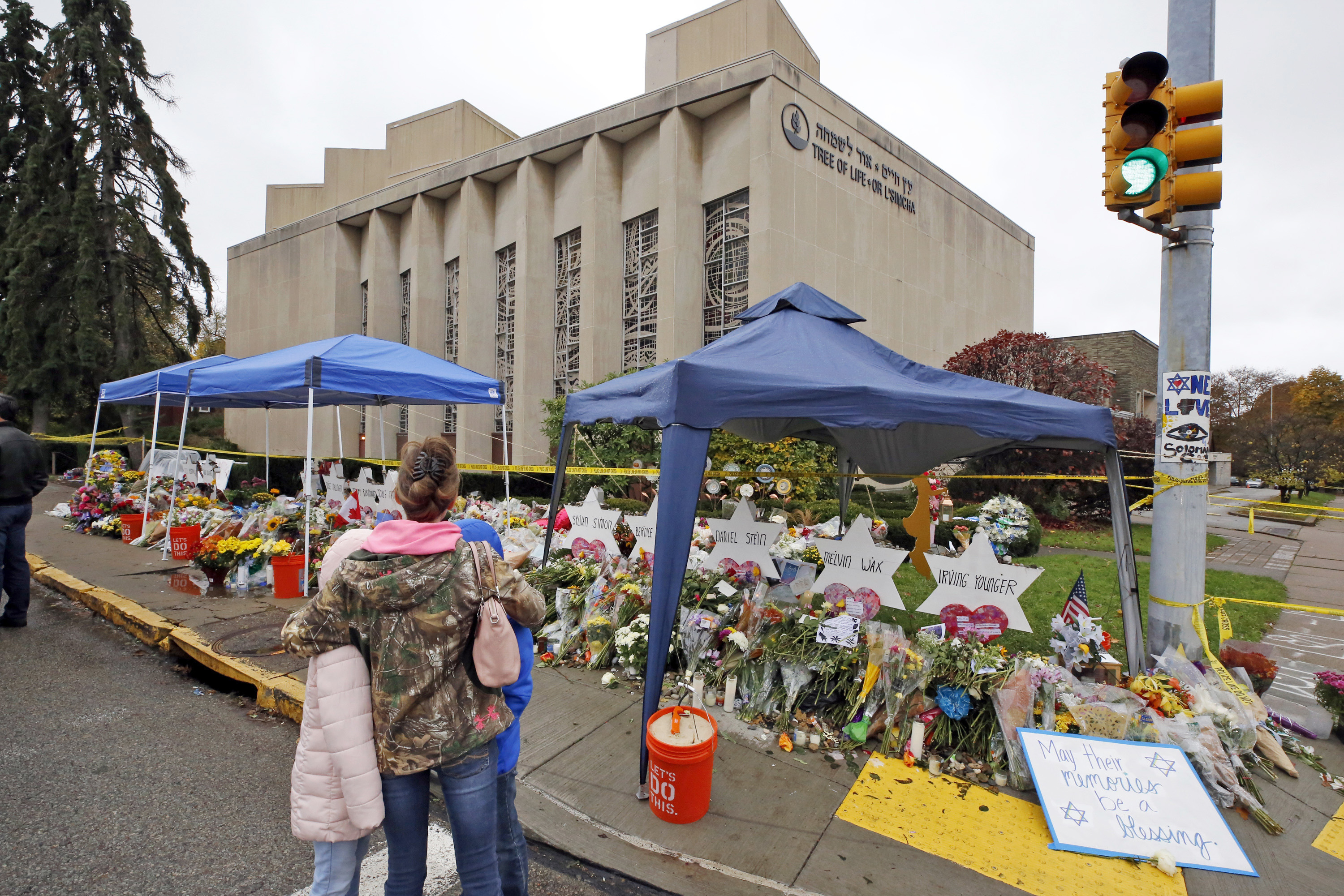 A woman and her children pause Nov. 3, 2018, to take in a makeshift memorial outside the Tree of Life Synagogue honoring the 11 people killed Oct. 27, 2018, while worshipping in the Squirrel Hill neighborhood of Pittsburgh. (AP Photo/Gene J. Puskar)

Recall the “Unite the Right” rally in Charlottesville, Virginia, in 2017. Recall the tiki-torch-wielding hate groups that included neo-fascists, KKK members, neo-Confederates and white nationalists. Recall the chant that was on their lips: “The Jews will not replace us!”

That is the “great replacement theory.” One third of all Americans now believe it.

The single bullet trajectory continues. Next time around, it killed worshippers at a Chabad synagogue in Poway, California.

And now, this time, that single bullet multiplied and took the lives of 13 people, 11 of whom were Black, at a grocery store in Buffalo, New York.

The gunman, Payton S. Gendron, was wearing tactical gear and body armor, with a video camera fixed to his helmet. He was carrying an assault weapon. Like the others, he pulled the trigger.

But, what pulled the trigger was readily apparent, because he had an anti-Black slur written on the barrel of his gun. In the 180 pages of invective that he posted online, there was one theme: White Americans are at risk of being replaced by people of color — once again, the “great replacement theory.” 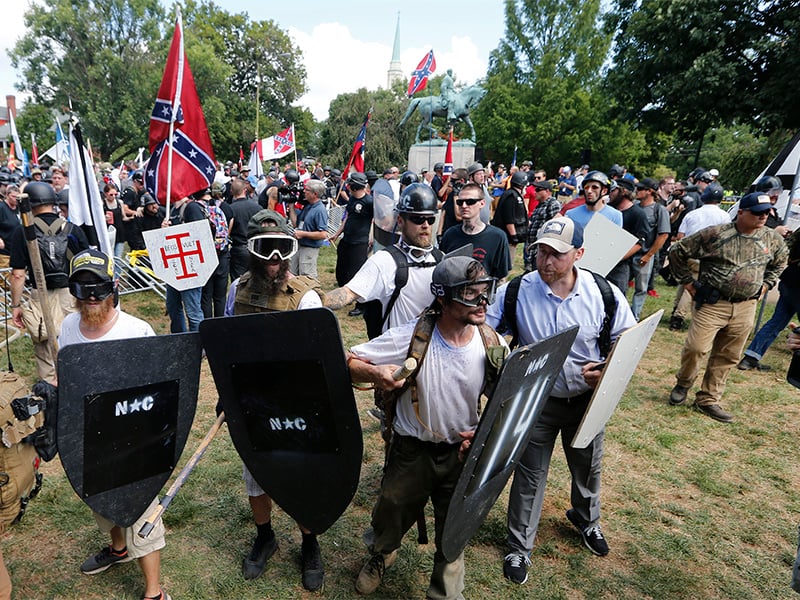 Thus you have it: the chain that connects Charleston, Charlottesville, Pittsburgh and Buffalo. People of color are taking over, and the Jews are helping.

Round up the usual suspect, the common perpetrator — white nationalism coupled with antisemitism.

This is just the domestic version. It has its overseas exports, as well — like the killing of 51 worshippers in Christchurch, New Zealand in 2019.

How do Jews fight this insidious ideology?

Then, Jewish groups should ban all politicians and public figures who support replacement theory from speaking at Jewish events. No more coddling them; no more honoring them. If they support great replacement theory, they are not friends of the Jewish people, and their presence in Jewish spaces profanes those spaces. If that sounds like cancel culture, so be it.

Second, it is time for American Jews (which includes Jews of color) and the Black community to come to a common realization.

Some years ago, I taught a class in Bible at Columbus State University in Columbus, Georgia. I loved my students, and we developed a warm relationship. Most of the students were Black, and most of them were military veterans. At one point in the class, some of the students asked about antisemitism and whether there was any connection to racism.

They nodded their heads. They understood. 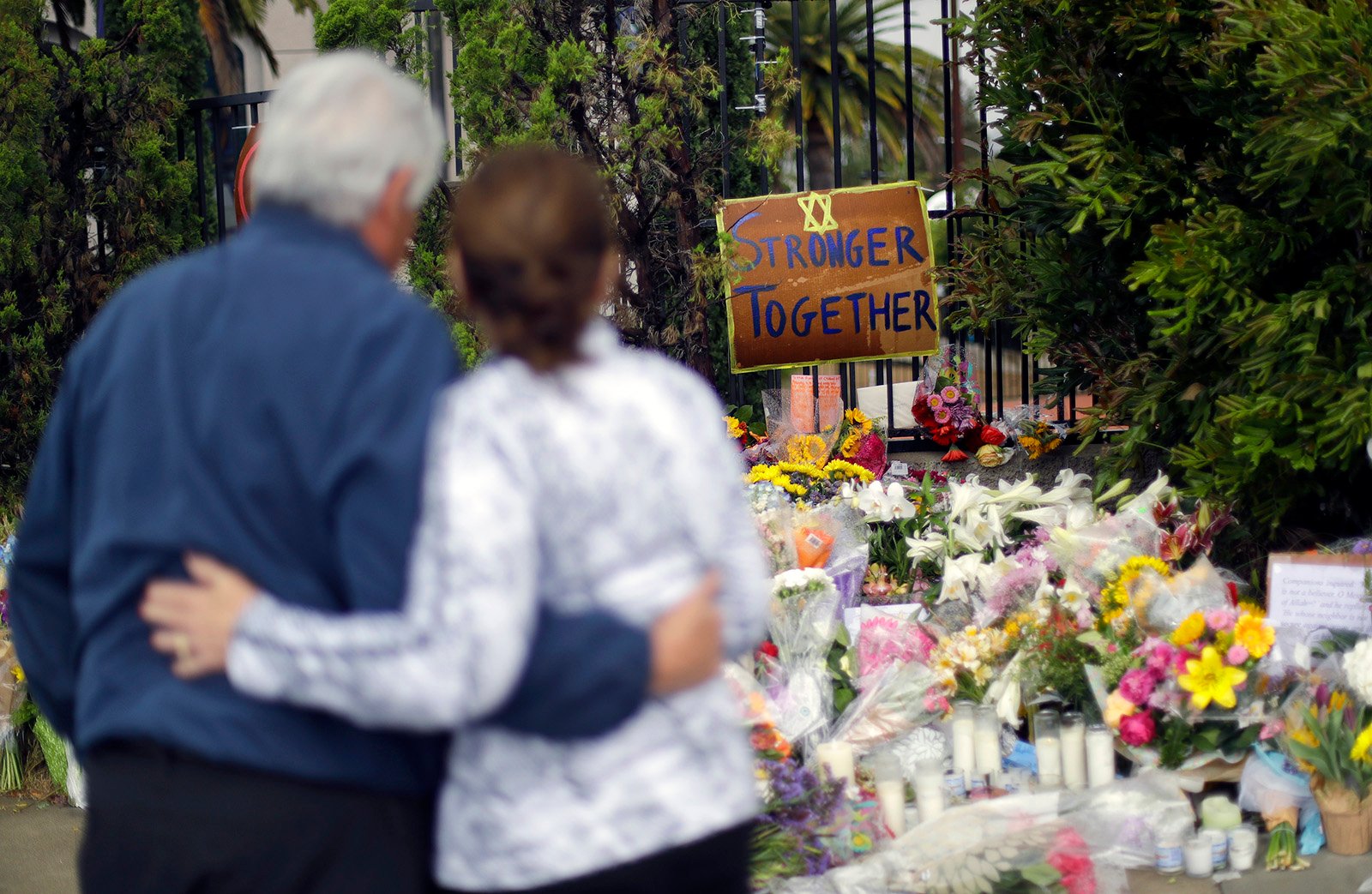 A couple embrace near a growing memorial across the street from the Chabad of Poway Synagogue in Poway, California, on April 29, 2019. A gunman opened fire two days before as about 100 people were worshipping, exactly six months after a mass shooting in a Pittsburgh synagogue. One person was killed in the Poway attack. (AP Photo/Greg Bull)

We American Jews spend a lot of time romanticizing what we imagined to have been the good old days of the Black-Jewish civil rights alliance.

In my phone, I carry a photo of the late Rabbi Arthur Lelyveld of Cleveland. It is not a pleasant photo. It shows him with blood running down his face after segregationists beat him with a tire iron in Hattiesburg, Mississippi, during the Freedom Summer of 1964.

But, nostalgia isn’t what it used to be. We need not — in fact, we must not — default to those now antique images, no more than we should retrieve the Nehru jacket from our closets.

Having said that: The killings in Buffalo should do something that even the killings in Charleston and Pittsburgh seemed not to do — and that is to convince American Blacks and Jews, and other ethnic and religious minorities such as Muslims and Sikhs, that we need to renew, restore, reboot and reimagine our relationships.

On local levels, it should lead to increased dialogue, relationships, projects — anything that brings us together.

May that knowledge create a renewed sense of empathy and common purpose. People pray outside the scene of Saturday’s shooting at a supermarket, in Buffalo, New York, Sunday, May 15, 2022. The shooting is the latest example of something that’s been part of U.S. history since the beginning: targeted racial violence. (AP Photo/Matt Rourke)