(RNS) — On Tuesday (June 14), thousands of messengers to the Southern Baptist Convention’s annual meeting in Anaheim, California, cast their ballots in the denomination’s presidential election. After a first round of voting eliminated two candidates, Bart Barber, regarded as the establishment candidate, garnered 61% of the ballots cast in a runoff to win the leadership of the nation’s largest Protestant denomination for the next year.

Tom Ascol, who was backed by prominent members of the Conservative Baptist Network, a group that believes the Southern Baptist Convention has become too liberal, captured the remaining 39%.

But Barber’s 22 percentage-point victory may have had as much to do with where the annual meeting happened as Southern Baptist politics. By choosing to meet on the West Coast, SBC leaders may have put Ascol at a distinct disadvantage in his attempt to wrest the presidency away from the establishment. Just a year ago, when the SBC met in Nashville, Tennessee, the presidential election also came down to a runoff between an establishment candidate (Ed Litton) and a challenger (Mike Stone) whose candidacy was supported by members of the fundamentalist wing of the Southern Baptist Convention.

Were Southern Baptists simply less interested in who would be president this year? Were conservatives so discouraged by Stone’s falling 4% short that they avoided the trauma this year?

Much more likely is that staging the event in California, instead of a Southern state, suppressed turnout significantly in general. 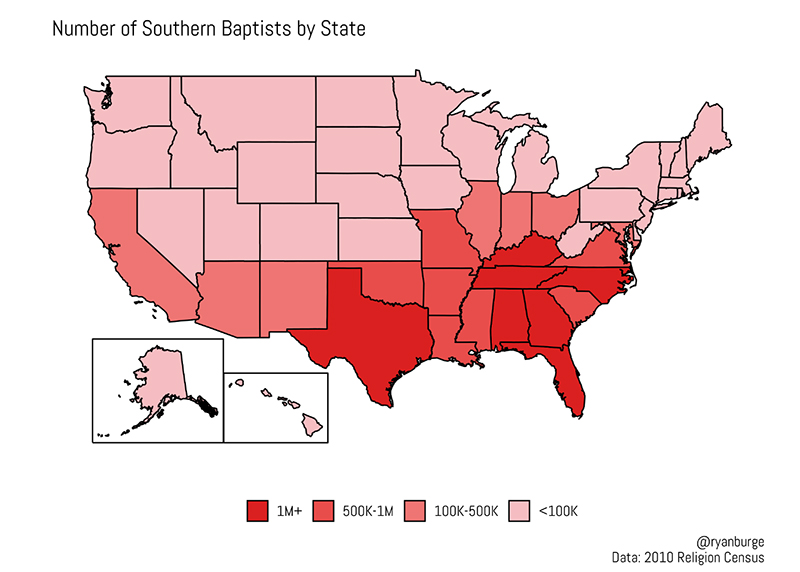 “Number of Southern Baptists by State” Graphic by Ryan Burge

The differences in SBC populations come into clearer view if we look at percentages. In 2010, there were more than 37 million people living in California, but only about 1.5% of them were Southern Baptists. Kentucky, with a little more than 4 million residents, contains 1 million Southern Baptists — a full quarter of the population — hundreds of thousands of them within a three-hour drive of Nashville. 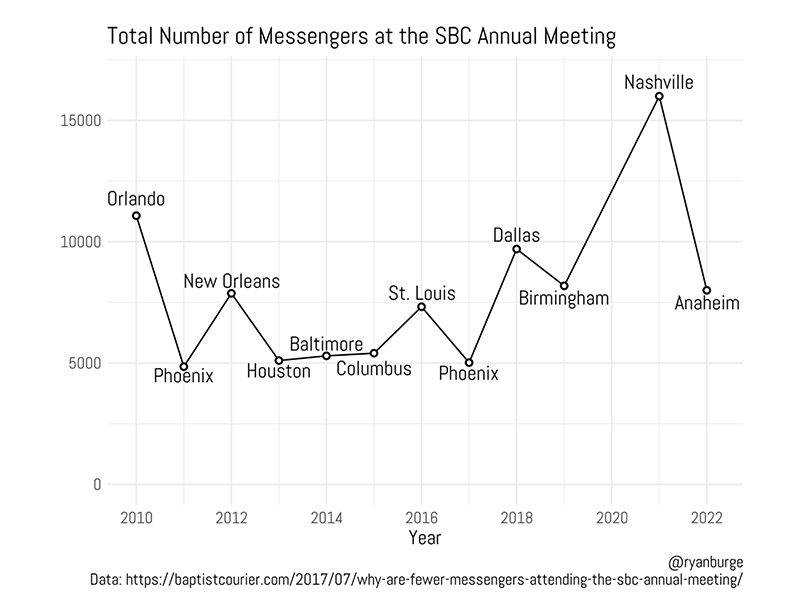 Looking back at the attendees of the SBC’s annual meeting over the last 45 years, this same pattern holds. When the gathering is held in the South, attendance is robust. If it is held elsewhere, the crowds tend to stay away. In 2017, when the meeting was in Phoenix, barely more than 5,000 messengers attended. A year later, in Dallas, attendance nearly doubled, to 9,700. Last year’s Nashville gathering had more than 16,000 in attendance; just half that met in Anaheim this week.

It stands to reason, in addition, that the average messenger who shows up to a California meeting holds different theological and ideological views than those who flock to Birmingham, Alabama, or Nashville. According to data from the Cooperative Election Study, 68% of Southern Baptists who live in Tennessee describe themselves as politically conservative, and 66% of those in North Carolina do so. Among Southern Baptists in California, just 53% say that they are conservative, and 21% say that they are liberal.

Was location alone enough to hand Barber his easy victory over Ascol? Not likely, considering that the stunning Sexual Abuse Task Force Report, released just a week before the Anaheim meeting began, implicated some influential members of the Conservative Baptist Network. Even those who agreed with his positions may find Ascol a bit too caustic personally to be president of the convention at a challenging time.

But while the CBN has now lost in two successive presidential elections, the group may look forward to next year’s meeting in New Orleans, where numbers and ideology could trend in their favor.