(RNS) — Students from Seattle Pacific University, a private school associated with the Free Methodist Church, have ended their more than monthlong sit-in protesting the board of trustees’ decision to uphold a policy prohibiting the hiring of LGBTQ people. They are now planning legal action against the trustees.

“The board has elected to refuse our demands, meaning we will be moving forward with litigation. This is not a decision that we take lightly, but it is a decision we believe will protect the future of our university,” the Associated Students of Seattle Pacific said Friday (July 1) in a statement posted on Instagram.

Tracy Norlen, a spokesperson for Seattle Pacific University, told Religion News Service in an email on Friday afternoon that there were no plans to change the university’s employee lifestyle expectations, which the dissenting students have described as homophobic and discriminatory.

As of Saturday afternoon, the student group had helped raise more than $35,000 through GoFundMe to cover legal fees. 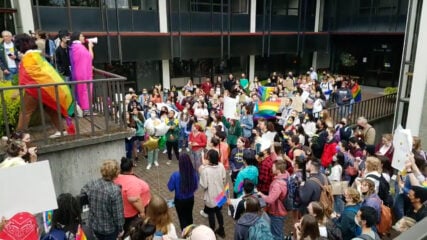 People demonstrate at Seattle Pacific University, May 24, 2022, after the board of trustees recently decided to retain a policy that prohibits the hiring of LGBTQ people. Video screen grab via Twitter/Jeanie Lindsay

Students participating in the sit-in, which began in late May, had given trustees until July 1 to rescind the hiring policy. On Friday night, as the sit-in concluded, students hung paper hearts from the ceiling and walls of the building where the protest took place. There were 924 paper hearts in the “Heartfelt Reactions” display, representing the hours spent protesting the policy.

The display is a nod to the trustees’ statement in late May noting that their decision to retain the policy, “which brings complex and heart-felt reactions,” was made in order for the university to “remain in communion” with the Free Methodist Church USA.

At issue is the school’s employee lifestyle expectation policy that states, in part, that “employees are expected to refrain from sexual behavior that is inconsistent with the University’s understanding of Biblical standards, including cohabitation, extramarital sexual activity, and same-sex sexual activity.”

The Associated Students of Seattle Pacific on Friday posted a letter on Instagram from board Chair Dean Kato that was addressed to sit-in representatives.

“We acknowledge there is a disagreement among people of faith on the topic of sexuality and identity. But after careful and prayerful deliberation, we believe these longstanding employee expectations are consistent with the University’s mission and Statement of Faith that reflect a traditional view on biblical marriage and sexuality, as an expression of long-held orthodox church teaching,” the letter reads.

The Associated Students of Seattle Pacific, in the same Instagram post, said they “remain committed to pushing forward with the knowledge that God’s love is too big for small ideologies.”

RELATED: Seattle Pacific University faculty vote no confidence in board over LGBTQ exclusion

In April 2021 the university’s faculty took a vote of no confidence in its board of trustees after members of the board declined to change the hiring policy. The no-confidence vote was approved by 72% of the faculty. In the aftermath, a campus work group was assigned to explore how the university could better address issues involving gender and sexual orientation, according to The Seattle Times. 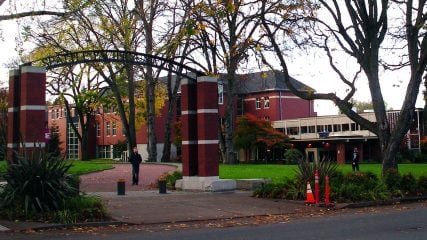 The campus of Seattle Pacific University in Seattle. Photo by Matthew Rutledge/Creative Commons

But before the trustees could vote on the campus work group’s recommendations, the Free Methodist Church USA issued a statement making clear the school would no longer be in communion with the church if it changed the hiring policy to be inclusive of those in same-sex marriages.

Chloe Guillot, who graduated last month, told RNS in June that their suit will be against the board of trustees, not the university.