(RNS) — At the Seven Loaves Food Pantry at St. Andrew’s United Methodist Church in Plano, Texas, volunteers have been serving 800 to 1,200 families a week since the COVID-19 pandemic began — about four times the weekly traffic in 2019.

At the ICNA Relief Food Pantry in Raytown, Missouri, just east of Kansas City, 100 new families have registered to receive the Muslim-led organization’s services in just the past month.

“We are busier than ever right now,” said Shannon Cameron, executive director of the Aurora Area Interfaith Food Pantry in Aurora, Illinois, where, after a slight dip around tax return season, between 30 and 60 new families are registering every week.

The inflation that has loomed over the economy and restricted many Americans’ purchasing power of late has doubly affected low-income people who already struggle to get by. A recent survey by the anti-hunger organization Feeding America has shown that increased demand has affected nearly 80% of U.S. food banks, as higher prices cause more families to seek assistance.

And while President Joe Biden recently signed the Keep Kids Fed Act, extending free meal programs for schoolchildren, many stopgaps funded during the pandemic have ended or are only available in some states.

“For the households that were already food insecure in 2020, nearly half of those reported using a food pantry,” said Jordan Teague, interim director for policy analysis and coalition building at Bread for the World. “Now, more people are facing the crisis. We’re all sort of feeling that pinch, and government programs are coming to an end.” 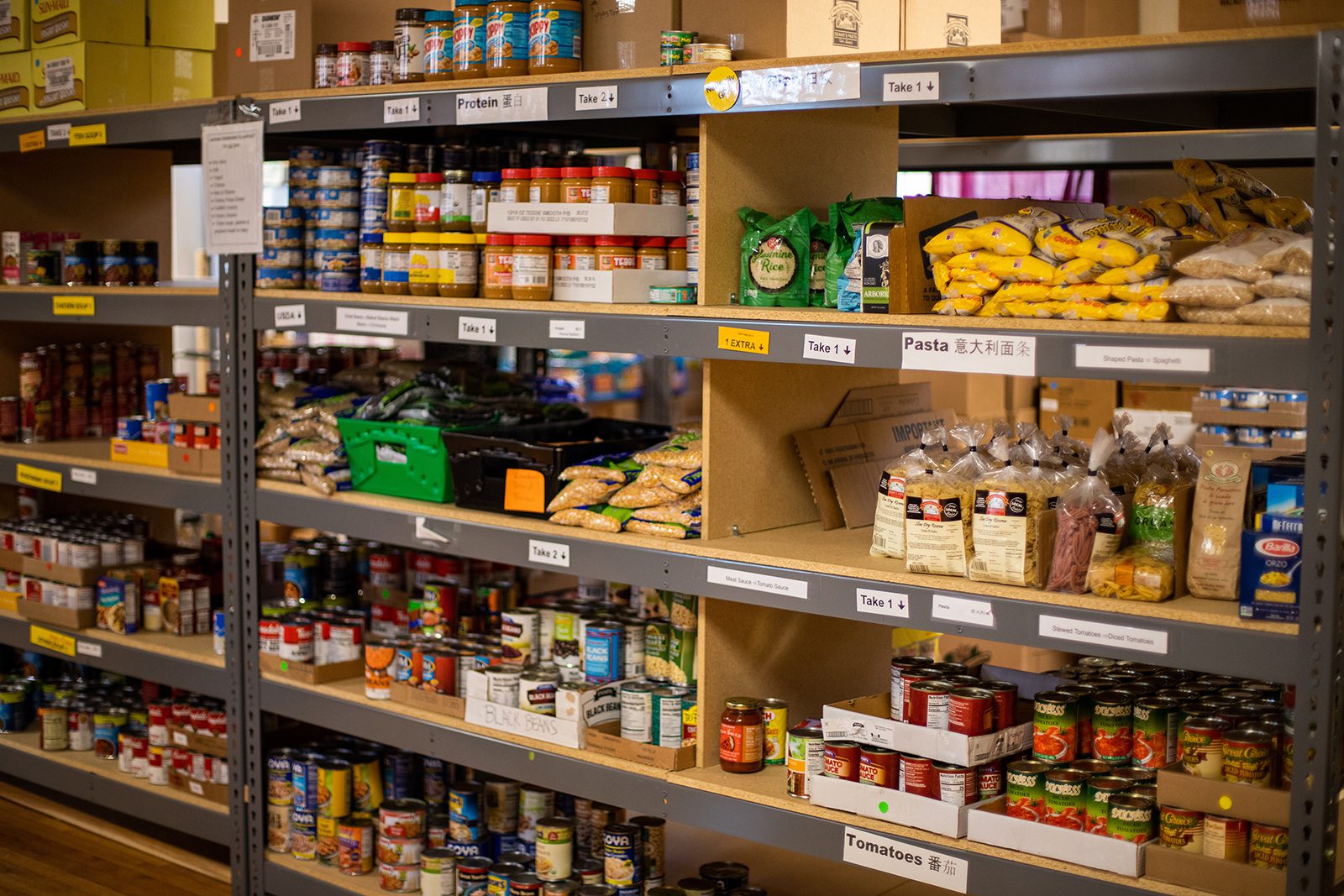 Since the 1980s, the U.S. Department of Agriculture has donated surplus commodities it buys to stabilize farm prices to the Charitable Food Assistance System, a network of food banks. For four years, the Trump administration bolstered the program to offset the cost of its tariff increases, raising the share of the USDA’s contributions to as much as 15% of some food banks’ supplies. Those resources, too, have now tailed off.

“We saw a real increase even before the pandemic hit in those USDA commodities and, obviously, during the pandemic, USDA made more commodities available as well,” said Celia Cole, CEO of Feeding Texas, a food security organization based in Austin. “Now, without them, we’re seeing a drop-off.”

Food banks are looking more than ever to make up the gaps with private monetary donations, and government financial assistance. “For every dollar donated to a food bank, we can stretch it to four meals,” said Cole. “We encourage people to be educated with their elected officials in support of hunger-fighting programs like SNAP and the Child Nutrition Programs.”

Historically high gas prices have added further strain on local food pantries, causing delays in the transport of food from farm to market, and from market to food banks.

“We own a fleet of semis,” said Mike Hoffman, inventory and logistics director at Midwest Food Bank, a Christian charity that supplies more than 2,000 churches, nonprofits and community centers across the country. “Fuel prices have taken a toll. We’ve gone through our entire year’s fuel budget in the first five months.”

The same supply chain problems, including a lack of available truck drivers, that have beset the economy apply to fighting hunger as well. Barbara Wojtklewicz, part of the leadership team that runs the food pantry at Christ Church in Plymouth, Massachusetts, said staff at the Greater Boston Food Bank, a regional network of 600 food distributors, have reported driver shortages recently.

“There is ample food to distribute,” Wojtklewicz told Religion News Service, “but they’ve had to limit … distribution to different food pantries.”

Maj. Deb Coolidge at the Salvation Army’s food distribution center in Plymouth has had trouble sourcing fresh food. “Less salad mix and cucumber — oranges and apples,” Coolidge said. “Those have not been on the list for the last couple of months.”

At ICNA Relief in Missouri, Ferdous Hossain, associate operations coordinator, has likewise found it increasingly difficult to provide fresh produce to the 300 families who rely on the pantry for food assistance each month. Local agencies, farms and food banks that ICNA collaborates with are also feeling the produce pinch. 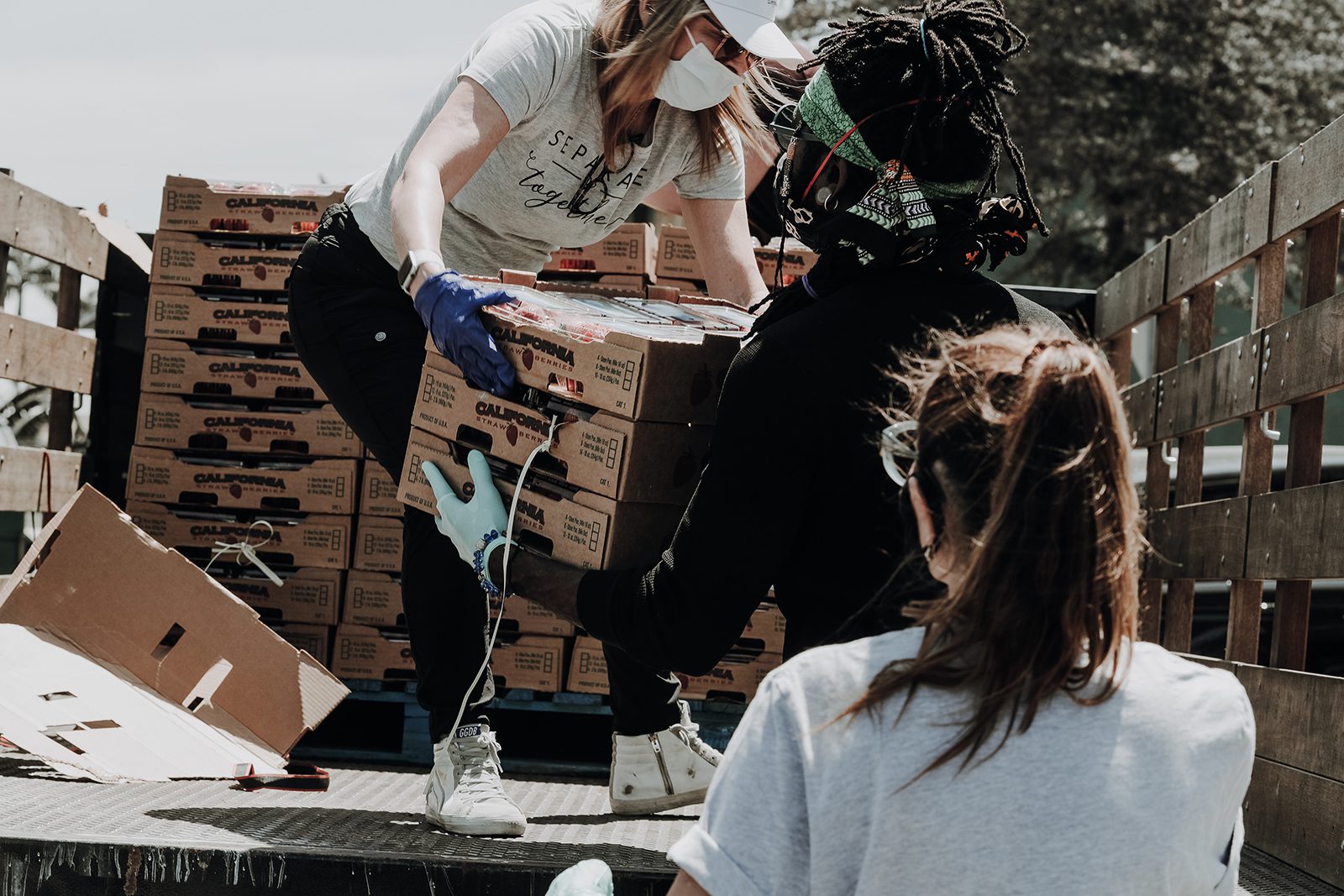 Stawberries are delivered to a food bank during the pandemic in 2020. Photo by Joel Muniz/Unsplash/Creative Commons

To live up to her center’s unofficial motto — “Fresh produce. Fresh fruit. Anything and everything that is fresh” — Hossain has been buying produce at the grocery store, a last resort because of higher prices.

Donors are also stepping up, thinking creatively to help fill the gaps. Wojtklewicz said that the Christ Church pantry in Plymouth received 100 gift cards to local grocery stores along with its shipment from the Greater Boston Food Bank.

As economists prepare Americans for a possible recession, Beth Zarate, president and CEO of Catholic Charities West Virginia, expressed “anxiety” about the rural residents in her state and their ability to stay ahead of increased gas prices and food costs. At 15.1%, West Virginia has the highest percentage of households facing hunger, according to a 2020 USDA study.

Zarate is counting on West Virginians to come to their neighbors’ aid. “West Virginia is unique because we come out at the bottom of every chart in terms of chronic health issues, hunger and poverty,” Zarate said. “But we also have people who are good to each other.”

“People are generous,” said Darra Slagle, director of Rose’s Bounty, a food pantry operating out of Stratford Street United Church in Boston, “and when they are made aware of the need, are able to help. I encourage people to give to their local food pantries. They could use money to get the things that they need.”

Hoffman at the Midwest Food Bank said prayer is another life raft for anti-hunger operations.

“We have a lot of prayer warriors,” he said. “The faith community is a huge part of what we do, (and) many churches pray for us. The Bible says, ‘The poor you’ll have with you always,’ so we know we have a job that needs to be done, and we’ll keep getting it done.”

This story has been corrected. An earlier version referred to Feeding Texas as a faith-based organization.

News
40 years in the making: A timeline of the Southern Baptists’ sexual abuse crisis
Follow us on Facebook!
Submit your photos to RNS