(RNS) — The Family Research Council, a conservative Christian think tank based in Washington, is the latest right-leaning organization to seek and receive a designation from the IRS classifying it as an association of churches. This move shields these political groups from even the most basic public scrutiny and insults others in the faith landscape who follow the spirit of the law.

The Billy Graham Evangelistic Association and Samaritan’s Purse, both headed by Franklin Graham, have also employed the strategy, as have the hard-right legal nonprofit Liberty Counsel and the American Family Association.

ProPublica, the pro-transparency news nonprofit, reported this week that the FRC and its overtly political arm, FRC Action, no longer have to file Form 990, the standard IRS disclosure that offers basic information about a tax-exempt nonprofit’s key donors, expenditures and staff. It also gives some assurance a group is honoring the limits on political activity Congress has placed on organizations whose donors receive a tax write-off.

Scholars and reporters (and some members of the public) rely on these disclosures to understand, study and monitor how politically active nonprofits are funded and what they do with their expansive liberties to advocate for their values in the public square tax-free.

Ostensibly founded to promote social conservatism, the Family Research Council’s practical purpose is to keep Christians in the Republican coalition — a challenge, admittedly, of late as GOP candidates, rhetoric and tactics become more un-Christian in the age of Trump. But FRC has risen to the occasion. After Trump lost the 2020 election, FRC’s president, Tony Perkins, recklessly advanced the lie that Joe Biden lost and that Republican state legislators could lawfully dismiss the electoral results.

Perkins, a former Louisiana state representative and longtime anti-gay and anti-abortion advocate, has done some good work with the bipartisan United States Commission on International Religious Freedom. But his day job has long been as a political hack and wannabe Republican kingmaker, which expanded during the last administration to serving as an occasional confidant of Trump’s. We’re increasingly familiar with the challenges to personal integrity that role requires. 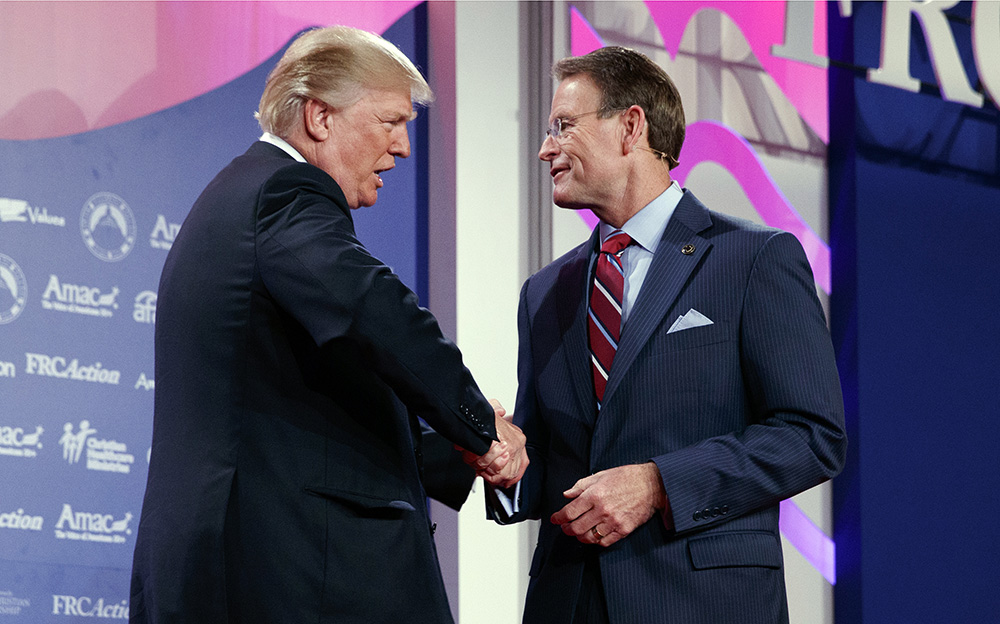 The FRC now wants us to believe, against all truth and evidence, that it is a church and Perkins is its spiritual leader. He is in fact an ordained minister, but he has no accountability to anyone other than his political group’s directors and megadonors, which can now be concealed with the IRS’ blessing.

What these Christian groups have done is perfectly legal, but it is morally wrong on multiple levels.

For one thing, the Family Research Council is not an association of churches. Its answers to the IRS’ 14-item questionnaire defining a church are replete with lies and distortions no honest person could even pretend to believe.

It fulfills none of the functions of a legitimate church: public worship, administration of sacraments or religious education. It says it accomplishes these things through partner churches but furnishes no list of partner churches as actual associations and denominations do.

The designation may be legitimate for some Christian aid organizations that have changed their IRS designation — though I continue to have doubts — but it’s indefensible for overtly partisan groups such as the FRC and the AFA.

Beyond the false claims, the FRC’s new designation insults the groups that do conform to the intent of the law. Congregations deserve the social and financial privileges they get. They do the everyday work of building actual religious communities around faith and order, worship and sacraments, and bolstering the social fabric of communities throughout the nation. For these vital social goods, which God alone knows, churches receive special consideration from the IRS.

I may find the link between their religious beliefs and their Trump discipleship incorrect, laughable and dangerous, but I can’t object to the FRC’s right to pursue legitimate electoral aims, even if it encourages riots and cheating.

But the price it should pay is to submit a Form 990. Plenty of decent conservative Christian nonprofits file it faithfully each year.

The blame for the situation can be spread widely. The IRS has been deferential to religious groups’ claims under Republican and Democratic administrations, going back decades. Churches are far less likely than other nonprofits to be audited, so the odds of these groups receiving a shred of scrutiny are now even more negligible.

It’s an ironic twist for people like Perkins who loudly claim their religious liberty is elsewhere being criminally violated. But that’s the gospel now for the likes of the Rev. Tony Perkins: Rules, norms and truth itself are for suckers.