(RNS) — When Pope Francis met with a delegation of First Nations, Métis and Inuit people in April at the Vatican, he told them he wanted to visit them in Canada this year.

And not just at any time of the year, but during the Feast of St. Anne (July 26).

“I think with joy, for example, of the great veneration that many of you have for Saint Anne, the grandmother of Jesus,” Pope Francis told the Indigenous delegation to the Vatican.

“This year I would like to be with you on those days.”

As the pope visits Canada through Friday (July 29), he will indeed celebrate the Feast of St. Anne in the country. He also will visit several sites dedicated to the saint, whom Catholics believe to be the mother of Mary and the grandmother of Jesus.

It’s a choice that reflects the aim of the pope’s “penitential pilgrimage”: to listen, dialogue with and apologize to the Indigenous peoples of Canada for the church’s role in the country’s residential school system that separated generations of Indigenous children from their families and cultures.

Many Catholics venerate St. Anne for her prominent role in the Holy Family, and she is a popular figure in Canada, where she is patron saint of Quebec.

“For all of us, I think we can all agree that our grandmothers are important figures in our lives, if for no other reason than they spoiled us rotten,” said the Rev. Scott Katzenberger, rector of the National Shrine of Ste. Anne de Beaupré in Quebec.

In particular, St. Anne is honored by many Indigenous Catholics, at least in part because many Indigenous cultures emphasize respect for elders — especially grandmothers who, like St. Anne, are seen as healers.

But there’s more to it than that, according to Jeanine LeBlanc, who teaches Indigenous studies at the University of Alberta and is researching Mi’kmaq women’s self-determination and relationship with religion.

The Mi’kmaq have had a complicated relationship with the Catholic Church since Catholicism arrived on their land in the 17th century, said LeBlanc, who is Mi’kmaq.

For the Mik’maq, veneration of St. Anne is about their relationship with her, not the institution of the Catholic Church. Many connect with the saint through traditional Mi’kmaq ethics and values and express those values in their interactions with her, including pilgrimages to sites dedicated to St. Anne. They relate to her not as an “imposing religious kind of figure,” LeBlanc said, but as a “more than human relative,” like ancestors, land or water.

“Part of the reason why a lot of Mi’kmaq people continue to pilgrimage is these are sacred places that have been sacred to us for a long time. So we’re not just going there to go through the rituals and rites of Catholicism, although that might be part of it, and honoring our relative St. Anne,” she said.

“We’re going there because we engage with more than humans.” 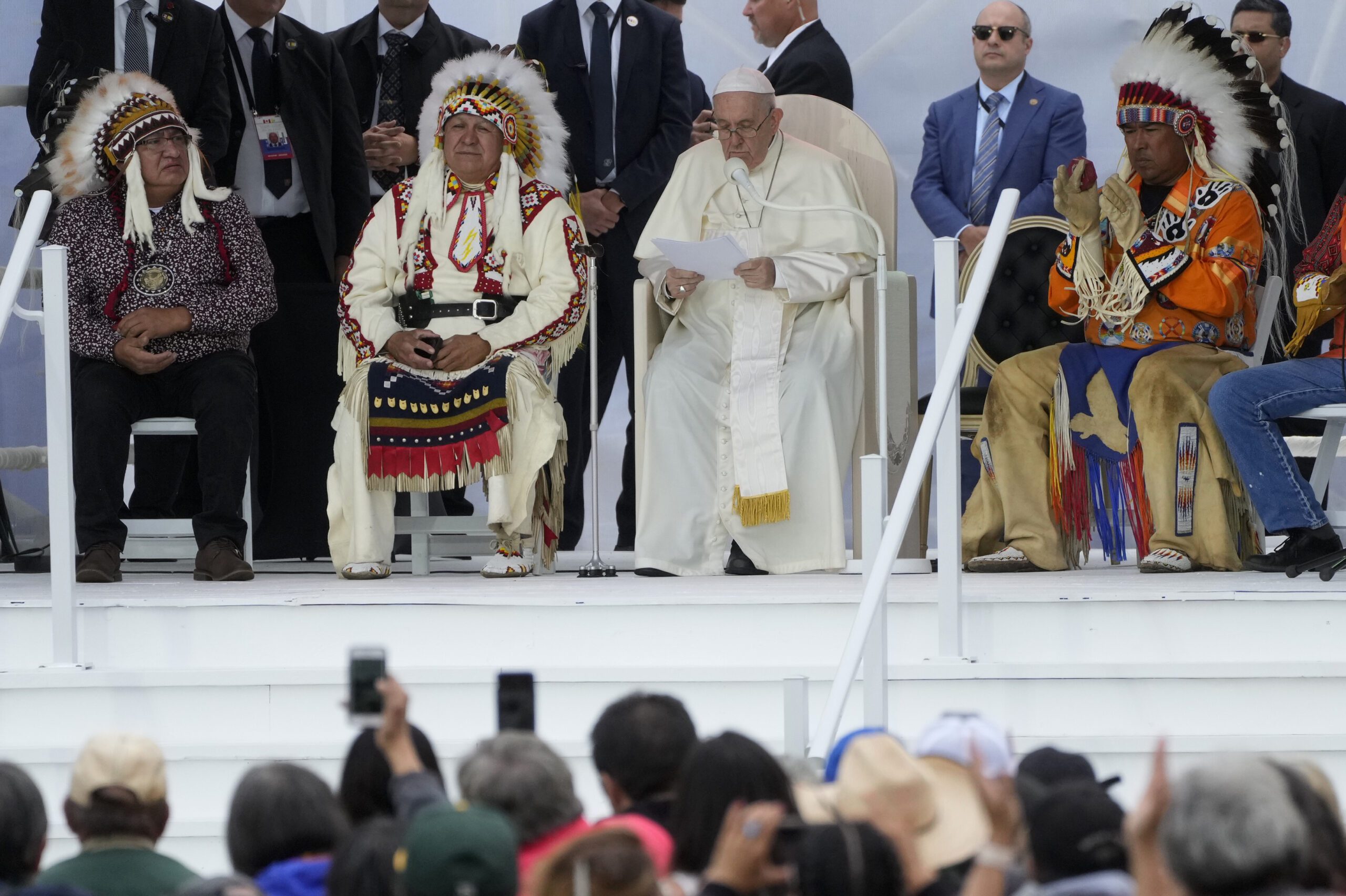 Pope Francis delivers his speech as he meets the Indigenous communities, including First Nations, Metis and Inuit, at Our Lady of Seven Sorrows Catholic Church in Maskwacis, near Edmonton, Canada, July 25, 2022. Francis is on a “penitential” visit to Canada to beg forgiveness from survivors of the country’s residential schools, where Catholic missionaries contributed to the “cultural genocide” of generations of Indigenous children by trying to stamp out their languages, cultures and traditions. (AP Photo/Gregorio Borgia)

Pope Francis is scheduled make the pilgrimage to Lac Ste. Anne in Alberta on the Feast of St. Anne, which comes on the third day of his visit to Canada.

About 40,000 Indigenous people from across Canada and the United States make the pilgrimage each year to the lake for several days of prayer, the Rev. Garry LaBoucane said in a video shared by the Catholic Archdiocese of Edmonton. Many people camp on the site during that time.

“It’s the largest and greatest spiritual gathering of Indigenous peoples in North America,” according to LaBoucane, who is Métis and spiritual director of the pilgrimage.

Even before it was renamed for the saint by the first Catholic priest to establish a mission on the site, the lake was considered sacred by the first people who lived along its shores, according to the pilgrimage website. The Alexis Nakota Sioux Nation calls it Wakamne, or “God’s Lake.” The Cree call it Manito Sahkahigan, “Spirit Lake.”

For some Indigenous peoples, the pilgrimage may be the one time of year they gather with their friends, families and communities, Métis Nation of Alberta President Audrey Poitras said in the video shared by the archdiocese.

“Certainly a huge part about it is the holiness of the land, the healing of the waters, and it’s just a great spiritual place to go,” Poitras said.

Later in the week, Pope Francis also will celebrate Mass at the National Shrine of Ste. Anne de Beaupré.

The shrine is one of the oldest and most popular pilgrimage sites in North America, housing several relics belonging to St. Anne and two columns filled with crutches and other items left by believers who credit the saint with their healing, according to the papal visit website. It welcomes more than a million people each year, including many Indigenous people.

Ste. Anne de Beaupré celebrates Masses in Indigenous languages, oftentimes with traditional music and dances, on First Nations Sunday in June and on the Feast of St. Anne, according to Katzenberger, the rector.